The price of bacon keeps getting heftier.

According to the Bureau of Labor Statistics, the average price of a pound of bacon in American cities rose another 6 cents in June, to an all-time high of $6.11. That's a 14 percent increase since June 2013 and a whopping 41 percent more than it cost in June 2012, when people were already writing articles about how expensive bacon was. Here's a graph illustrating the dramatic rise in bacon prices over the past couple years: 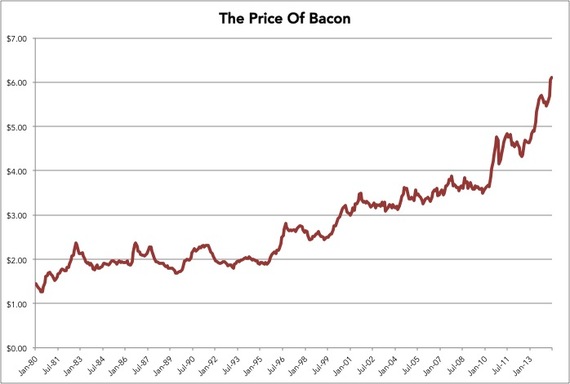 For what you'd spend for a pound of bacon today, you could buy a whole four-pound chicken, a six-pack of PBR, 10 pounds of bananas, 36 eggs, or a paperback copy of the fourth installment of George R.R. Martin's A Song of Ice and Fire series, A Feast For Crows.

Of course, prices rise all the time -- that's the nature of inflation. But the dramatic spike in the price of bacon goes far beyond inflation, which is hovering around 2 percent a year. To see just how dramatically, I adjusted the monthly average price of bacon for inflation, using the PCE deflator, the Federal Reserve system's preferred measure of inflation. It turns out that bacon prices have consistently surpassed previous all-time highs, even after accounting for inflation. Here's a graph illustrating that trend: 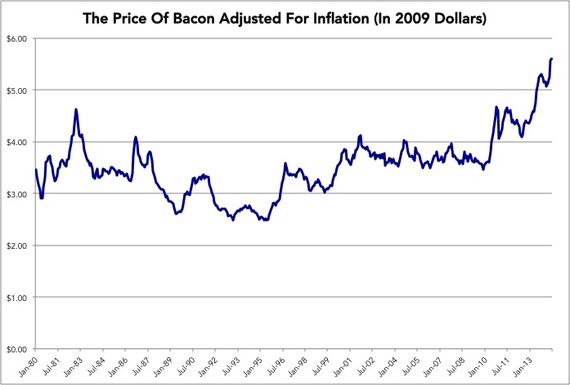 As you can see in that graph, there was another major boom in bacon prices in the early-'80s. But the surge going on now puts it to shame. After adjusting for inflation, bacon is now 21 percent more expensive than it was at its 1980s peak in September 1982.

Three basic factors account for the latest rise. A virulent disease, porcine epidemic diarrhea virus, has been killing American pigs by the thousands for almost a year, drastically reducing the stock of livestock available for bacon-making. Demand for bacon keeps rising. And an ongoing drought across much of the U.S. has forced feed prices to historic highs.

That said, bacon isn't the only breakfast staple getting more expensive. Disastrous diseases also have dramatically increased the price of orange juice and coffee in recent months.

As if waking up in the morning weren't hard enough already.