You may soon have to cough up a lot more bacon if you want to buy bacon. A mysterious virus has been killing great numbers of piglets since it was first discovered in the U.S. herd in April, cutting into the supply of pork and pushing prices way up.

As Fox Business reporter Gabrielle Karol writes, the source of the Porcine Epidemic Diarrhea virus -- PED for short -- is still unclear. But its symptoms aren't. Piglets infected with PED experience diarrhea and vomiting violent enough to kill them. Though the U.S. Department of Agriculture has confirmed only about 400 cases of the disease in the lab, its toll has already been estimated in the hundreds of thousands.

As a result, pork price futures have skyrocketed to historic levels, with hundredweights of pork going for about $105 in recent trading at the Chicago Mercantile Exchange. USDA data show that the same amount of pork went for $78 in March, before the virus hit.

Prices for pork bellies, which are cured into bacon, have risen particularly fast. On Tuesday, the wholesale price of a hundred pounds of fresh pork belly passed $189 -- 5 percent more than it was just five days earlier and apparently at or near all-time highs. Pork bellies made headlines back in 2010 for soaring to a then-record $1.35 a pound -- or $135 for a hundredweight -- which now seems remarkably low.

Retail prices for bacon don't track one-to-one with belly prices, but they've risen sharply too. The Bureau of Labor Statistics pegged the price of a pound of bacon in urban supermarkets at $4.92 this past June -- up 14 percent from June 2012 and another all-time high.

Good growing conditions for corn have kept prices of hog feed down, so there's no reason to cry "aporkalypse" quite yet. But the days of throwing delicious, crispy bacon around, expense be damned, are numbered.

UPDATE 8/9: Derek Thompson over at The Atlantic rightly pointed out that my claim of all-time high bacon prices didn't account for inflation. So I went back and adjusted bacon price data for CPI and PCE inflation rates -- and found that "real" prices were actually highest in 2011. Here are the charts: 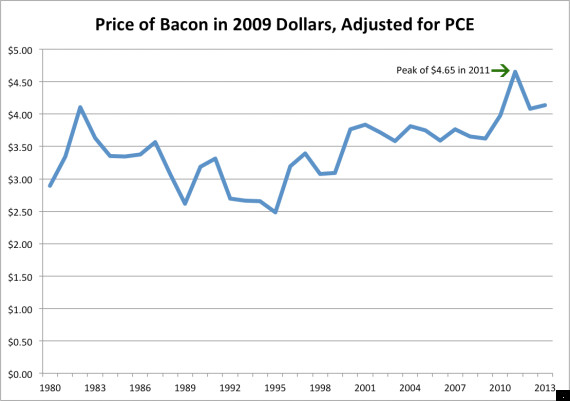 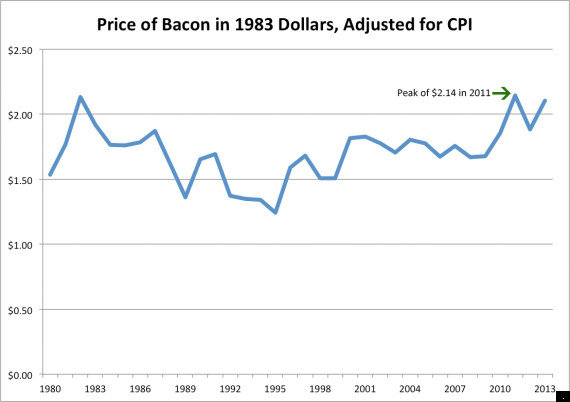 There's an important caveat here, though. The Bureau of Labor Statistics hasn't released data on the retail price of bacon for any month past June -- before the full brunt of PED's impact on prices could work its way through the supply chain. (Both those charts reflect prices for June of each year.) It's entirely possible that, since then, the average price of a pound of bacon has risen enough to set a new record even in real, inflation-adjusted terms. But we won't know for a couple months.