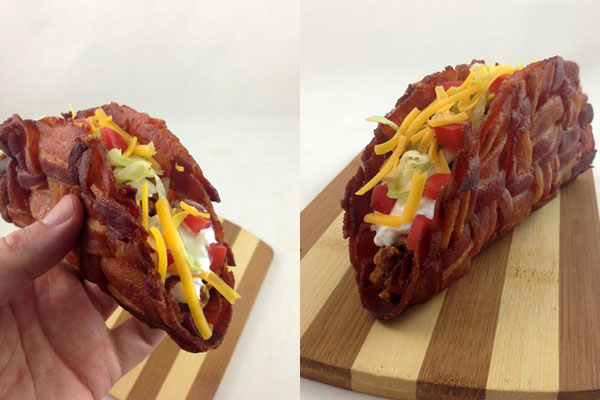 Last week I posted a story about a Bacon Weave Taco that I made. Now, I'm definitely not the first person to make a Bacon Weave Taco, but the problem with most of the ones I've seen is that they just didn't look appetizing to me.

It seems like people sort of took the easy way out when making them and just tossed their bacon over a metal object, made sure the strips overlapped a little so they'd stick together and either baked or deep fried it like that so their shells just end up looking like squares of bacon that had been folded in half. Long story short, most of the bacon taco shells out there just don't look very taco-shaped.

What I did for my bacon taco shell was start with a square bacon weave that used about 14 slices of bacon, or seven going in each direction. I then cooked the bacon weave in my oven at 400° for about 15 minutes before taking it out, patting it down with paper towels to get rid of the excess grease and then placing an upside down bowl over it and tracing around it with a knife until I was left with a circular bacon weave.

After that I hung it over a couple kabob sticks that were balanced across empty beer bottles and left it like that for a few minutes so it would keep its shape. I'm sure that there was probably something better I could have draped it over, but you've gotta make do with what you've got right?

Since I wasn't quite sure if beer bottles were safe to put in the oven I swapped them out for a couple pint glasses, put them on a baking sheet, hung my bacon weave taco shell between them and slid it back into my oven for another 10 minutes so it could finish cooking.

Granted, I'm sure the beer bottles would have been fine, but I didn't know if the labels would burn or if the glue that holds them to the bottle is toxic. Then again, when you're eating stuff like this on a regular basis a little bit of toxic glue should probably be the least of your worries...

In the end my Bacon Weave Taco ended up looking -- and tasting -- way better than I ever could have imagined. Once it was done baking I filled it to the brim with seasoned ground beef, sour cream, lettuce, tomato and shredded cheese and took a bite. It was completely amazing, and aside from that the shell, actually looked exactly like a real taco shell!

Maybe you're just not a fan of tacos though, and in that case the bacon weave can also be used for such things as a Bacon Weave Quesadilla, a Bacon Weave Breakfast Burrito, a Bacon Weave Grilled Cheese Sandwich or even Bacon Weave Pizza. The possibilities are endless!