Dengue fever is on the rise around the world. As traditional folk dancers teach prevention in India, hospitals in the Philippines desperately add beds to care for the high influx of infected patients and health officials in the Bahamas brace themselves for the added toll Hurricane Irene's heavy rainfall could have on an already record outbreak there.

Yet no effective vaccine or treatment for the mosquito-borne tropical disease is in sight, and many of the insecticides that once killed virus-laden mosquitoes no longer do the trick.

But a novel, low-cost strategy may offer hope to the more than 2.5 billion people who live in regions that harbor the disease. According to a pair of Australian studies published on Wednesday in the journal Nature, injecting a harmless bacterium into mosquitoes that can be passed on to the insects' offspring could thwart the ability of the dengue virus to replicate.

In effect, scientists are vaccinating mosquitoes rather than people. But the end result would be more or less the same. "If it can't grow in a mosquito, then it can't be transmitted between people," said Scott O'Neill, dean of science at Monash University in Melbourne and co-author of the papers, during a press briefing on Tuesday.

Dengue infects as many as 100 million people every year, mostly city-dwellers in the tropics. The virus is transmitted by the bite of Aedes aegypti, a mosquito species that tends to live in close proximity to humans, breeding in the stagnant water of swimming pools, birdbaths and discarded tires. Unlike species that spread malaria, however, this mosquito typically seeks its blood meals during the day. Bed nets offer little protection.

While dengue fever can be fatal, it more often lays sufferers up for weeks. In places like Vietnam, it can cost as much as half of a family's annual gross income for a family member to receive treatment in a hospital, according to O'Neill.

"This is an enormous, growing and uncontrolled problem that is spreading into new geographic areas, including Florida," Kathryn Hanley, an expert on mosquito-borne diseases at New Mexico State University, told The Huffington Post.

Hanley and other experts also not involved in the new research are hopeful that the new strategy will help in the ongoing dengue battle, though they note that only time, and further studies, will tell if introducing the bacterium can actually lead to long-term dengue eradication.

"This hasn't been done before, at least not deliberately," said Jason Rasgon of the Johns Hopkins School of Public Health, who wrote a commentary accompanying the studies.

The population of natural carriers of the bacterium used in the mosquito injections, Wolbachia, includes many mosquito species -- but not the ones that transmit disease. Why that is the case still baffles scientists. But because Wolbachia is already found in about 70 percent of insects, researchers are more confident in the mosquito vaccination's safety and effectiveness.

"Recently, we've begun to see that the infection protects insects against a variety of pathogens," said Rasgon. "This phenomenon is happening in nature all the time. Now researchers are simply causing it to happen in a laboratory."

O'Neill and colleagues tested various strains of Wolbachia until they found one that blocked viral infection without shortening the lifespan of the infected mosquito so much that it couldn't propagate through a population -- the common roadblock of prior genetic modification strategies. They found a winner in the wMel strain.

When a female without this bacterium mates with a male carrying the bacterial infection, their offspring die. But any female with the infection will pass it on to viable offspring, regardless of the infection status of her mate. This allows the Wolbachia to quickly spread through a population of mosquitoes. 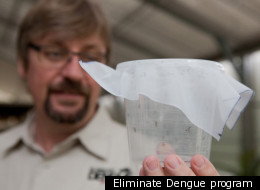 In the first part of their experiment, the researchers introduced batches of Wolbachia-carrying mosquitoes inside controlled cages at weekly intervals. Within just a few generations, nearly all of the caged mosquitoes became infected with the bacterium.

The next step, and the material of the second paper, was to allow these manipulated mosquitoes to mate with their wild counterparts. The researchers chose two isolated suburbs of Cairns in Queensland. With the community's cooperation, they released a total of 150,000 lab-reared mosquitoes in both areas over the course of two and a half months.

The researchers were pleased to find that Wolbachia infection rates in mosquitoes steadily increased during this period. In fact, the bacterium's infiltration continued even after researchers stopped releasing batches of infected mosquitoes.

"There was almost complete penetration at these sites," said O'Neill, adding that this Wolbachia presence should persist, keeping the risk of dengue low into the next wet season for these areas.

Exactly how the bacterium impacts the virus is still up for debate, but O'Neill offered a couple possibilities: Wolbachia might somehow boost a mosquito's immune system or compete with the virus for key molecules, or both.

Next up, according to the researchers, is taking the experiment to areas of the world with greater levels of transmission, such as Thailand, Vietnam, Brazil and Indonesia.

Ary Hoffman of The University of Melbourne, another co-author on the papers, suggested that one of the advantages of this new technique is the possibility of transplanting mosquitoes from an area with complete infestation to a separate high-risk region, eliminating the need to breed more insects in the lab. "Effectively, this could be one-off strategy," he said.

Such an idea concerns Hanley, the New Mexico State professor, however. She pointed to the inherent risks associated with moving both mosquito genes and their pathogens.

A lot of unknowns also remain regarding the effectiveness of the strategy. Experts agree that it is possible that Wolbachia could evolve to have less of an impact on the virus, or for the dengue virus itself to evolve to resist the bacterium's effects. The dengue virus already comes in an array of genetic variations.

If the tactic doesn't completely eradicate dengue -- Wolbachia-infecrted mosquitoes can still be slightly susceptible -- it could select for resistant mosquitoes and more aggressive viruses, warned Hanley.

She further highlighted one key piece of information that remains missing: the impact on transmission rates in people outside controlled settings.

"There are a number of hurdles we still need to overcome before we get to the stage where Wolbachia can control dengue," said Hoffman. "These are early days. But at the moment, we are very hopeful."

Also supporting this optimism are hints that Wolbachia infections might work against a broad range of other diseases, including malaria. Johns Hopkins' Rasgon is even investigating how Wolbachia might impede the spread of West Nile Virus.

Meanwhile, there are "extremely promising" dengue vaccines currently in the pipeline that could prove viable within 10 to 20 years, according to Hanley, whose own research involves vaccine development.

"We are learning that, with these more intractable pathogens, a one-pronged approach may not be sufficient," she added. "If we have the resources, we are better off to double-team."

CORRECTION: An earlier version of this article stated Scott O'Neill was a professor at the University of Queensland. He is dean of science at Monash University in Melbourne.