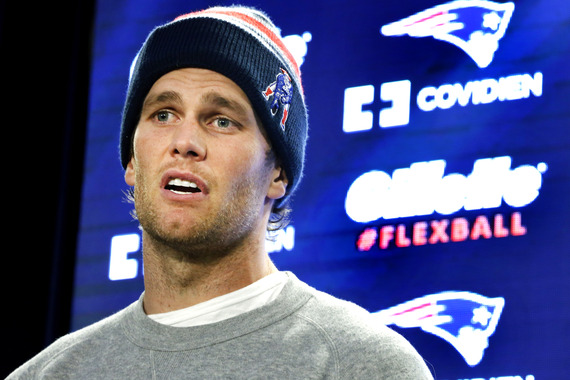 The NFL handed Super Bowl champion Tom Brady a four-game suspension Monday on the heels of last week's release of the league's "deflate-gate" findings. The report stated that the New England Patriots deflated footballs to gain a competitive advantage in the playoffs and it was "more probable than not" that Brady had some involvement in the scandal. The fact that an investigative team would slap together such a non-accusation accusation on the Golden Boy shouldn't be a surprise since he is the face of the league. But the language they chose is the strangest we've seen since Bill Clinton uttered, "It depends on what the definition of 'is' is." And this lawyer-speak got me thinking about how we might be able to leverage the phrase at work should we ever find ourselves in a pickle. Here are situations in which we can make our workplace worries disappear by saying, "More probable than not."

Boss: Jack, did you get the TPS report done?
Me: More probable than not.

In the situation above I am fighting fire with fire. After all, it's never been clear why exactly I'm supposed to fill out the TPS reports, and now it's just as clear to my boss whether my report has been completed.

Human Resources: Jack, do you know anything about the 300 copies of what looks a rear end on the copier?
Me: More probable than not.

Here I was able to confess to being a part of the crime without actually indicating my role in the event. The thinking is that the conversation will become uncomfortable for all parties and the subject will likely be dropped. If there are follow-up questions, simply stick to the script by answering each one by saying, "More probable than not."

Office Birthday Girl: Jack, I brought in a cake for my birthday but I can't find it. Did you eat it?
Me: More probable than not.

This one is all about the delivery. Your eyes need to droop a bit to communicate that you're sorry, while your frosting-covered mouth spews words that don't exactly confess what you're sorry for.

Front Desk Guy: Heading out early, Jack? The kid sick again?
Me: More probable than not.

You're single and don't have anything that resembles a family of your own, but front desk guy doesn't need to know that. In this situation, the phrase doesn't lie and it doesn't exactly tell the truth either, but why take sides?

Boss: What do you think, Jack?
(Jack is caught daydreaming and not paying attention at a meeting.)
Jack: More probable than not.

It seems like a solid enough answer. If the boss was asking if the idea was good, risky, stupid, or brilliant, the answer is the same. Your boss simply wants to be supported, and you -- more probable than not -- are there to be that helping hand.

Coworker: You going to the happy hour, Jack?
Jack: More probable than not.

This is the ultimate double speak because the true answer, of course, depends on the co-worker. Invites from Terry the Tank vs. Crusty Chris will have very different levels of interest, but by using the magic phrase, you're answering them both honestly.

Good luck out there and if your friends ask if you enjoyed this article, please tell them, "More probable than not."