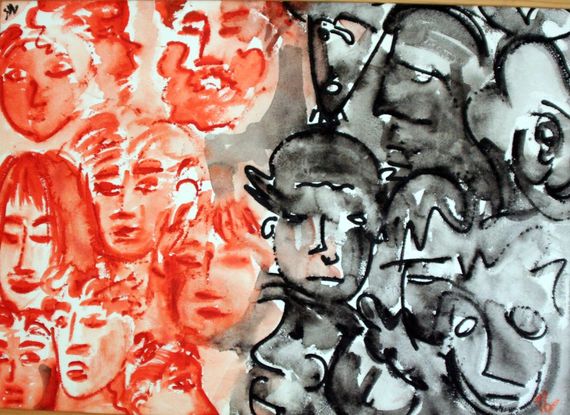 It is a truth widely known fact that if you're fortunate enough to have written and published a book and lucky enough to have people talk about it, comments will run the gamut from good to bad, with many shades of mediocre in between. I say lucky enough to have people talk about it because that's the point, isn't it? One of them. In the most basic terms, provoking a reaction is one of an artist's motivations. And let's face it; these days if there's a reaction to anything, God knows, it's not a private one. We are, as a generation, more public than public was ever meant to be -- about everything. So knowing all this up front, as an author, is it possible to prepare yourself for polar reactions?

Yes, I believe you can. However, just because you are prepared for this, it does not protect you from feeling unsettled when the bad ones appear like storm clouds over your beach blanket. All the preparation in the world will not shield your ego or arm your teetering self-esteem. What's worse is if you're like me, you take stock in the criticism more so than in the praise. Why is that? How could criticism be more legitimate than accolades? It's not, of course. It's just someone else's opinion. (Remember the other pole?) It's just that barbs pick at our insecurities -- which never truly scab over in the first place -- no matter our experience or accomplishments.

I was recently visited by storm clouds, myself. I received a review from a reader who really hated my book and even admitted to throwing it away. Ouch. I actually had a physical reaction while reading this review. I became queasy -- even against my better judgment and self-coaxing to remember: you can't please everyone, to each her own, where's that thick skin?, plenty of people love it!, you were prepared for this, grow a spine! In the blink of an eye, I let that one review weigh infinitely more than the ten amazing reviews which preceded it. This was a storm cloud indeed, casting dark shadows over the touching reviews that made me misty-eyed or the ones that had me dancing around my kitchen. I could no longer remember those. My silent pep-talk didn't help a bit.

Then something wonderful happened. I needed to pry myself from the screen in order to take my daughter to see a dance performance at the Joyce Theater. There was no time to languish in self-pity. Something else needed my focus. When we arrived at the sold out performance I took a quick look at the program. I started to read some of the dancers' bios: someone recently danced with New York City Ballet, another was in A Chorus Line on Broadway, this performance would be another's debut. The curtain went up and I was immediately transported by their captivating, awe-inspiring show. Within the first minute of the first number, I was filled with euphoria. I realized, by watching them, that I was one of the lucky ones. Just like these dancers, I, too, have an audience. I thought about the many talented artists among us who will work at their craft for their entire lives and never experience the rush that comes from an audience. Whether it's because the powerful Selectors of the Creative World don't ever find them, or maybe they choose to be invisible -- afraid of rejection or afraid of success. They will never get to hear the applause. Or, for that matter, feel the spray of the raspberries.

So as an author, I can be prepared for this: by virtue of having an audience -- with their many faces, both appreciative and prickly -- therein lies the reward.

Eva Lesko Natiello is the author of The Memory Box, a psychological thriller about a woman who Googles herself and discovers the shocking details of a past she doesn't remember.