Irving Berlin once wrote lyrics to a song that were sung back and forth between "adversaries"....but with a light feeling, a banter of sorts.

The lyrics could have been written about my Daddy and his very close friend and neighbor Moody Caraway pictured here, staring at Daddy. Read on... 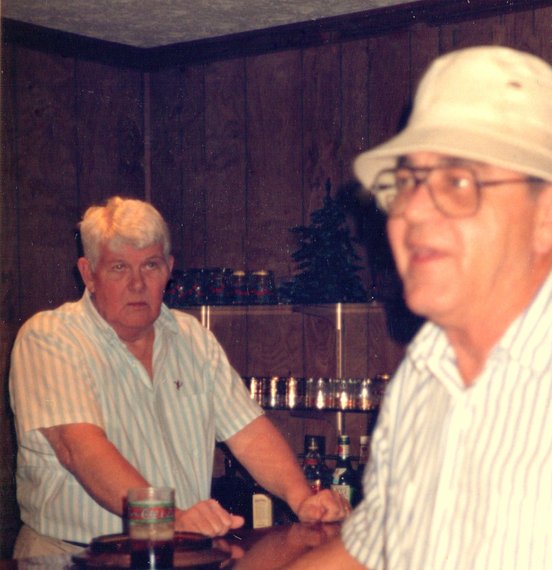 The Hitchcock Family moved to Montgomery, AL on June 3, 1966, while the Caraway Family lived just two houses down, across the street....and the mayhem began.

From the beginning you need to know that Daddy and Moody were brothers in the true sense of the word....tied at the hip, as close as they could be. You also need to know they were both "eaten up with it", a distinct and polite Southern term meaning "full of it"....and they were! They regularly pulled jokes, stunts, and antics on each other....and to their mutual credit the one who laughed the loudest was the one who the mischief was played on.

They both loved working in the yard. One would find a new saw, hammer, electric drill....well you fill in the tool, and insert whatever...the result was that within two weeks the other had a slightly newer and improved version. As their relative incomes increased, so would the level of one-upmanship.

Then one day came "The Event", as it became known.

Back in those days, "rolling" yards with toilet tissue was a big deal. Generally it was done as a tribute to a young lady of the house and occurred on a weekend....if your yard got rolled, that meant a boy "liked" you, and the young lady in question would float in euphoria for a day or two, especially the following Monday in school.

"Guess what! My house got rolled Saturday, they used over 20 rolls and they used Charmin, double-ply!" Other young ladies would oooh and aaah as they talked about their respective rollings. It made no real sense then insofar as a way of honoring a young lady... and doesn't now, but it was a reality of the day.

Once when our yard missed being rolled three weekends in a row and my sister was despondent, Daddy snuck out and rolled the yard on Sunday night. Now as mom always bought Scot tissue in delicate green that perfectly matched the avocado green floor mat and towels in the bathroom. Sara knew that Daddy had probably done it, but it gave her bragging rights at Cloverdale Junior High on Monday, so it worked.

You need to understand this because one weekend Moody, accompanied by Gloria, his lovely, demure, charming but most certainly disapproving and unwilling, went to our house under the cover of darkness and very VERY lightly rolled the yard...two rolls at best, one ply.

Somehow Daddy got wind of it.

Moody, Gloria and daughters Pam and Betty were going on a family trip in a few weeks.

Daddy bided his time and began preparations. He went to several neighborhood households with whom we were close. In one of the first "recycling" events I ever knew of he had each household save beer and whiskey bottles as well as stubbed cigarette butts in a galvanized trash can just for the purpose.

He then went and bought an untold number of the cheapest toilet tissue...the sandpaper type, one-ply he could find...brand name/quality was a symbol of ardor and regard, the implication being exactly what you think.

Moody and Gloria were due back on a Saturday around noon. Friday night Daddy gathered all of his materials and with my mom, Princess Pat watching from the sidelines, making those "clucking" signs of disapproval that only a mother can truly make, watched as Daddy BOMBED the house with everything from toilet tissue, Pabst Blue Ribbon cans, Marlboros, Salems, Jack Daniels bottles.....I just can't tell you how bad it looked....how he got the tissue in the tops of the towering oaks is still a mystery.

Several neighbors gathered in the back room of the Thompson's house, who lived directly next door to the Caraways, awaiting the moment when the travelers pulled in their driveway after their trip...let's say they ATTEMPTED to pull in the driveway...it was unfortunately blocked by the sheer volume of debris that covered everything.

Slack-jaw doesn't begin to describe their faces. They surveyed the carnage in awe, then Moody started walking to our house.

Daddy snuck out the back way from the Thompson's house and sprinted to our house through some back yards. He arrived seconds before Moody.

Moody knocked on the back door, and Daddy opened it, breathless from his run. Moody looked Daddy straight in the eye, then burst into laughter, put his arms around Daddy's neck and they both laughed until tears were running down their faces.

Princess Pat watched this, all the time muttering TOTALLY called-for remarks about "two grown men without a brain between them...." sorts of things. Gloria showed up in the middle of it all and blessed Daddy and Moody BOTH out for being idiots in one of the sharpest speeches of her career, and then joined in the laughter, as well as Mom.

When the hysteria subsided, Gloria went over to Mom, whispered something in her ear, then together they issued an edict....the TWO of them were to get over to her house and clean it up to her specification and direction. Mom produced an old pair of white gloves for her use.

They didn't do this again.