2019 was a year to remember. We enjoyed a chicken sandwich war, got really into rosé and discovered Trader Joe’s sells wine in a can. Chalk this year up as a win.

But not everything was rosy ― we’re all still making egregious mistakes out there in the food world. Perhaps another year and a little more perspective will turn the tide as we age into the roaring ’20s.

Here are just some of the things that need a do-over.

Death, taxes and seeing gluten-free everywhere you go. As we embark on the ’20s, it’s high time we get a little perspective when it comes to that wonderful substance that gives bread that singular chew we find so addicting.

“Unless you have a true diagnosed celiac disease, it’s usually the other ingredients that are a problem [for your health], like quick rise yeast and a lot of sugar,” said Mareya Ibrahim, celebrity chef and author of “Eat Like You Give a Fork:The Real Dish on Eating to Thrive .”

“Not to mention, many gluten-free flours are just refined white flours, which aren’t great for you,” Ibrahim added. As we’ve written in the past, breads that are high in sugars and refined flour tend to pack on the weight and don’t offer the nutrients of whole-grain breads.

Obviously, those with celiac or gluten allergies absolutely need to abstain, but in many ways the gluten-free trend’s popularity is just a smidge ridiculous.

As Ibrahim put it, “Listen, you’re not fooling anyone with a gluten-free fried doughnut.”

It’s an avocado. It’s bread. I don’t care if you’re throwing watermelon radish or regular radish on it, it’s not worth $13.

Is it good? Yes, avocado toast is amazing. It’s also why I’ve been making it in my own kitchen since I discovered bread and the wonderful spreadability of the avocado.

Now I can’t get a sensibly priced avocado toast outside the home because so many of you have decided that dropping serious coin on this overpriced menu item is reasonable at brunch. I feel like we should blame the bottomless mimosa for such a poor fiscal decision.

There’s a reason you know at least a couple of people on this diet: It sounds amazing. At its root, keto means eating “low-carb, high-fat” until you inevitably fall off the pizza wagon or decide that you can indeed have too much bacon for one lifetime.

One worry about a diet like this is that it’s restrictive, often cutting out foods that are actually beneficial for your body.

Ibrahim referred to one of her Facebook videos on cleansing: “That’s where diets like ketogenic diets worry me a little bit, because they’re so focused on fat and not so much on the fiber. You need the fiber ― think of it as a broom through your system just raking things through.”

As a lover of foods healthy and not-so-healthy, I also find it insanely difficult to subsist on steaks and bacon and wonderfully fatty foods and not want to dive into a bowl of spaghetti. There is a question of how sustainable this type of diet can be for people who struggle to make good nutritional choices.

Also, when you load up on fat, there are other concerns. “Eating a ton of bacon and cheese is not a long-term approach to overall health,” Ibrahim said. “Your poor arteries.”

When it comes to plant-based meat alternatives, squeezing the texture and taste of actual meat out of a faux substance is indeed possible. But some liberties are taken in its creation.

Animal meat is high in saturated fat, but plant-based alternatives have their own issues.

“Often manufacturers of these plant-based meats load them with excess sugar, fat and sodium to compensate for their bland taste and texture,” explained nutritionist and Candida diet creator Lisa Richards. “The sodium content of some meat alternatives can reach nearly 20% [daily value] for sodium while most animal burgers stay around 5% DV.”

Ibrahim has previously dissected the benefits and pratfalls of the budding plant-based meat industry.

She found that while a ground beef patty has about 4.2 grams of saturated fat, a Beyond Burger of the same size has 6 grams and an Impossible Burger comes in at 8 grams.

“It seems counterproductive to add fat to a plant-based meat, but this is common practice for some manufacturers,” Richards said. “Check the trans and saturated fat content to confirm you are consuming less than you would with an animal-based alternative.”

At some point, we all became pretty jaded with toast for being, well, too milquetoast. The solution was to unicorn it up.

Instead of making the toppings delicious, we colored them and moved ever closer to living in a Skittles commercial.

“The amount of sugar in these over-the-top rainbow bowls overflowing with toppings that look like a unicorn pooped on it is killing people,” Ibrahim said. “They might be pretty, if you’re 5, but not healthy, especially in the morning.”

Sadly, very few people in the history of the world have ever shoehorned how delicious celery was into a conversation. Then, 2019 happened and everyone looked to celery as a savior, because when the world hits rock bottom you tend to grasp at anything.

Richards does give major props to it, though: “Celery contains some healthy micronutrients, including lots of beneficial flavonoids. These are plant compounds that act as antioxidants in our bodies and reduce inflammation.”

But as for being a miracle vegetable, hold your horses.

“No one food can cure all of your ailments, and the claims that celery juice can cure cancer and other serious medical conditions on its own has not been proven by any scientific studies,” registered dietitian Alyssa Pike explained to HuffPost in April.

Unless it comes in tandem with your breakfast meal at the drive-thru, you’re going to pay handsomely for juice. We’re not talking the orange juice served in a shot glass at the local diner, which is expensive as well. We’re talking about that ginger, turmeric, apple-flavored Divine Clarity juice you get at the local juice bar ― the kind of place that only lets you in if you’re wearing yoga pants or are currently embroiled in a conversation while wearing AirPods.

The thing is, juicing is a science. And done poorly, it can rob you of proper nutrition.

“Juicing has gotten out of hand,” Ibrahim said. “You lose all the fiber when you juice, which can make sugar content [go] through the roof. And the cost is prohibitive.”

Juicing obviously has myriad benefits. As with anything, widen the scope of what you’re eating and imbibing.

“Juicing is popular for its supposed health benefits,” Richards said. “While juicing can lead to weight loss, it does not tend to be sustainable and juices should not replace whole foods and meals. There may be a significant amount of nutrients in these beverages, but there are many that are missing from simply following a balanced diet, especially protein to balance out the concentrated carbohydrates.”

Or as Ibrahim suggested, “Eat the food! It is better for exercising your metabolism, too.”

One interesting way to lose weight has been to call off eating altogether, at least for a short period of time. Intermittent fasting has become increasingly popular, and for good reason.

“Intermittent fasting does closely replicate the way that many of our ancestors would have eaten,” explained Richards. “It slows metabolism less than traditional calorie restriction and, if implemented correctly, can lead to sustained weight loss.”

But the concern is that a trending diet like intermittent fasting could lead to egregious missteps for the uninitiated.

“While reducing calories [is] an effective means of losing weight in the short term, it can sometimes lead to weight gain in the long term,” warned Richards. “First, it causes your metabolism to slow down. Your body essentially begins to believe it doesn’t need as many calories as it used to, so when you do begin eating more calories, they get stored as fat more quickly. Second, it can actually lead to over-eating in some cases. If you are fasting for a 24-hour period and you have a moment of weakness, you can over-indulge due to hunger and lack of calories.”

Done improperly, intermittent fasting can actually put on the weight.

9. Food Created For The ’Gram

Let’s be honest, some of the food out there is designed for Instagram rather than for the belly.

“I would love to see over-the-top garnishes disappear,” said Joey Schwab, pastry chef at Spiaggia and Café Spiaggia. “Whether it’s milkshakes accented with a sickly amount of sweets or Bloody Marys with an entire meal on top, it’s excess for excess’ sake.”

Rather than conjuring something that will leave an indelible culinary mark on the taste buds, their creators often design the items just to look pretty.

“These dishes are created with social media in mind in hopes that the photos go viral ― but with the aesthetic as the top priority, the drinks lose their culinary focus, and in turn, the final product isn’t very special,” Schwab continued.

Ibrahim echoed the sentiment: “The whole Pinterest-perfect and noodled-to-death with tweezers has to go.”

The Holiday Brunch Casserole That Every Hash Brown Lover Needs

How To Make Your Own Samoa Cookies With Just 4 Ingredients 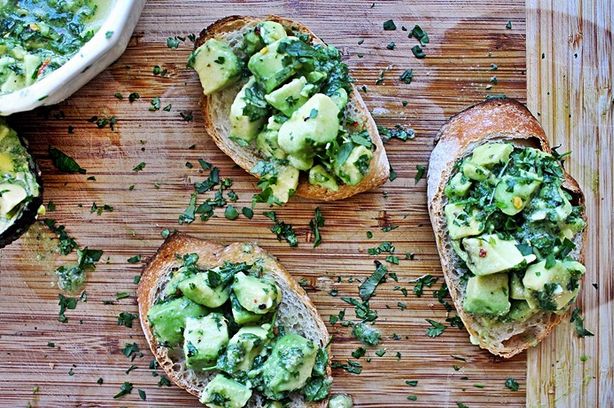