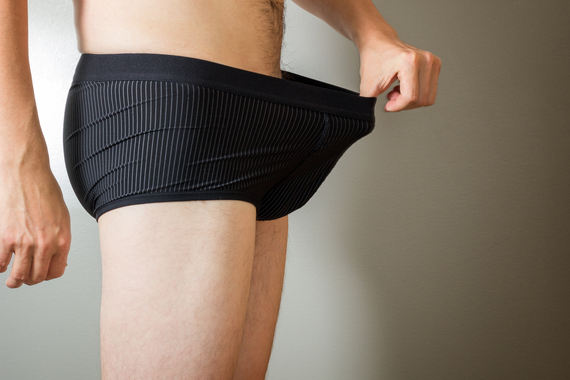 A number of people have written to tell me that, as head of Intact America, I should go on record against the "male-body shaming" language in the new movie "Bad Moms." If you haven't seen the scene in question, click here. The disputed phrase uttered by actress Kathryn Hahn as Carla is: "Uncut guys are great. Oh, they're always SO nice to you [pause for effect], because they know their dicks are gross."

This funny ha-ha comment is followed by a scene that involves Hahn pulling a tight pink sweatshirt away from Kiki's (played by Kristen Bell) head and "penis face" and wrestling it down her body, at which point the Bad Moms are told: "Just go to town; jerk it off until you want to sit on it." By the way, in the same scene, Carla describes the foreskin as a "giant clit." Could she mean "VERY SENSITIVE"?

I have no problem with people who want to protest this movie. I deplore the body shaming of any person or group - men, women, trans, disabled, wounded, fat, thin, or whatever real or imagined physical features mean people use to make fun of others. And if protests - written or on the street - can draw attention to the problem of male genital mutilation in our culture, that's fantastic.

But I also have to confess that, personally, I'm not that upset about "Bad Moms." I sort of agree with my young intactivist colleague Amy, who said, "Well, at least they're talking about it."

On the one hand, saying that guys' foreskins are gross is mean and dumb - like a lot of things women and men say about each other.

Calling a man's penis disgusting, whether it's cut or uncut, is actually no meaner than the proverbial and stupid "hello, ladies" jokes (for the record, I never felt shamed by these, just embarrassed for the joke-teller), or than women calling each other "cunts." It's no more ignorant than pretty much everybody in America mistakenly referring to a woman's vulva and entire pubic area as her "vagina."

On the other hand, rather than focusing on Hahn's sotto voce "dicks are gross" comment, maybe we should think about the first part of the sentence: "Uncut guys are great. They're always SO nice to you...."

Since I became a "career intactivist," advocating against circumcision, I've been privy to dozens - no, hundreds - of in-person and online conversations about love-making with "uncut" versus "circumcised" guys. American women are realizing that most of their male peers are missing something in the sex department. And from a walk-on-the-wild-side wistfulness, to just plain curiosity, they're realizing that women, too, are missing out. This is sad for everybody concerned. But it's great that we're finally talking about it.

A couple of years ago, a teenaged girl in my family told me, unsolicited, that she'd asked a new man in her life whether he'd been circumcised. She said, "I was SO happy when he told me he wasn't; I think guys who aren't circumcised must be nicer, because nobody hurt them when they were babies." He subsequently became her first "real" boyfriend, and they're still together. She also told me that she'd shared this theory with some of her girlfriends, who were intrigued by the conversation. I think back to my own high school days when not only was every boy cut, but that the whole subject was taboo - not making it into friends' most intimate conversations, let alone into popular movies.

We've got a very long way to go before the natural penis is a given in America. And we've got an even longer way to go before American men and women really understand the impact of genital mutilation on our culture and our own intimate relationships. In a circumcising society, denial and defensiveness are as pervasive as is the practice of tying boys down and cutting off a most personal and private part of their body. But if anything is going to make this practice stop, it's an open discussion - even if it's silly or ugly, at times - about what used to be too secret to even mention.