I like a nice dreamlike experience, so you can bet I was pinching myself frequently Thursday night at the Roxy on Hollywood's Sunset Strip, as a fine friend and I joined a sold-out throng in celebrating the outrageously-unlikely reunion and return of Big Audio Dynamite.

A miracle of modern music made manifest, BAD first arrived to transform the pop medium in 1984, under the auspices of former Clash man Mick Jones, stirring up a unique and groundbreaking stew of London punk, rock, reggae, disco, dub and electronica with vital bandmates Dan Donovan, Don Letts, Greg Roberts and Leo Williams. They truly earned their name. For the next 13 years the band scored hits and mutated, then dissolved into its members' respective projects.

Now BAD is back. 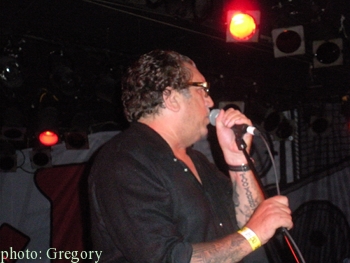 Jonesy sets off the Dynamite.

Pre-show, anticipation and energy ran very high, the Roxy's climate grew humid and funky, and via the P.A. Pogues sing-alongs ensued (plus a cheeky entry of "Should I Stay or Should I Go?") -- then, at the 11th-hour, former Sex Pistol and current man-about-L.A. Steve Jones introduced the band who would be BAD.

Hoping to attend and desiring surprise, I had avoided all clips of BAD's recent U.K. shows, but nonetheless, before dinner we were treated to a glorious sound-check of "Bad" and the deliriously-catchy hillbilly-meets-rasta anthem, "The Battle of All Saints Road" -- so even before the band took the stage for their concert proper, I knew they'd be aces. 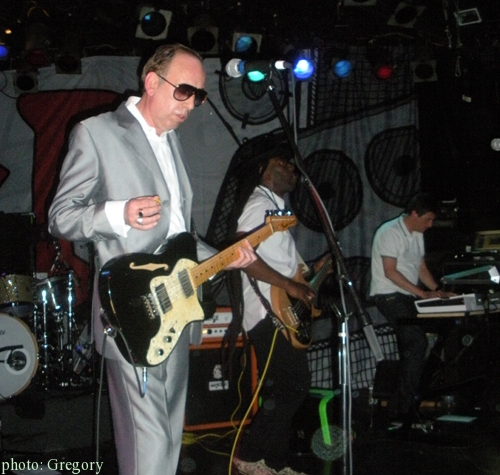 Launching into their debut album's opener, "Medicine Show" -- again, fans and faithful, are we dreaming? -- BAD instantly dispelled all doubts that they were and are the pioneers and masters of their own auditory territory: guitar-based but very danceable pop, rugged but never rude, smart, lyrically enchanting and hella fun. Known on record for their ingenious and often cinématic samples, they clearly didn't feel the need to cram Sergio Leone's entire canon into their live show -- just enough to keep it spicy. ("How nice it is to be back here," Jones knowingly joked, "so soon after 25 years -- in the heart of the film world!") Adding a layer of personal sensitivity and social conscience that makes Bono seem like Bieber, BAD then played the autobiographical "Beyond the Pale," one of three songs performed that evening which Jones wrote with his late Clash-partner Joe Strummer.

Grandpa came from Russia
Stowed away hidden in some bales
And he took my grandma dancing
To the air-raid sirens' wail
-BAD: "Beyond the Pale" 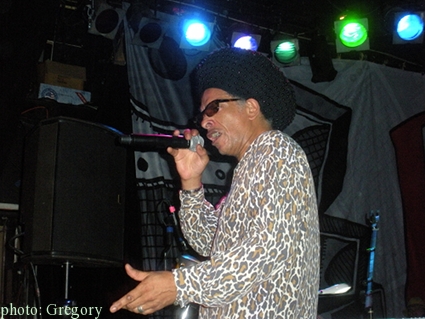 Indeed, it takes a kind of magic to mix beats, brains, bonhomie and bravado, and BAD took us all on that trip, a Gen-X Magical Mystery Tour, if you will -- as a full-scale warm-up to their shorter Coachella festival appearance on Saturday. Letts' raps and effects blended seamlessly with dewy Donovan's keys (the group's freshest face, we thought he was a new member); and on the rhythm end Williams' bass rocked with Roberts' skin-syncopations while all filled in wry harmonies. Bliss prevailed via classic tracks like "A Party" (which Jones dedicated to tyrant-of-the-month Gaddafi), brain-cell paean "Other 99" and the ebullient, mainstream-media-sidestepping "Just Play Music!" -- the latter two from BAD's brilliant and insanely-underrated third album, Tighten Up Vol. '88, which sounds as fresh as anything from the countless imitative bands they've since spawned. 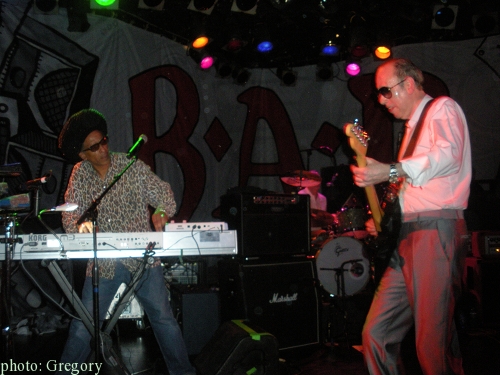 Letts and Jones funk out.

And did they play the hits? Did they ever. I don't wish to blow the whole show, but during the entirety of both "The Bottom Line" and "E=MC²," some hottie with an engagement ring (?!) was so transported by the utter BAD-ness that she opted to grind her unmentionables all over my rather surprised and not-entirely-displeased thigh -- which happened to be bearing a deceptively-rigid bottle of green tea in my pocket. (That's rock and roll. Hey honey, the bottle wants your phone number.) Pre-show, BAD drummer Roberts informed me that they would rock the house; and what initially sounded like a cliché turned out to be a thrilling promise fulfilled. It was that sort of excitement, that sort of evening. Dreamy. It was BAD, but it was good. And you need to go see this simultaneously legendary and futuristic band. While you can. 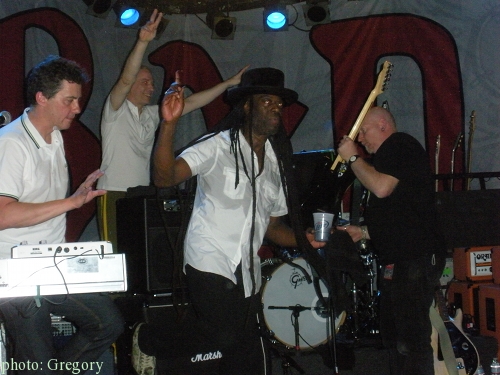 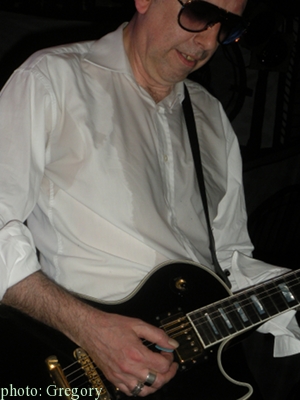 Big Audio Dynamite appear at New York's Roseland Ballroom on Tuesday, and they party on with festival dates through the summer.