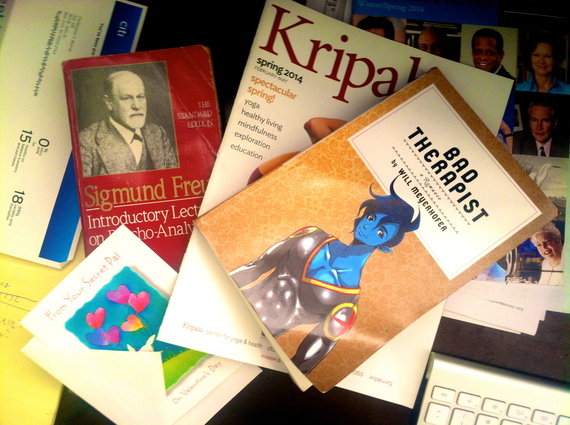 The sincere, comedic and provocative new novel, Bad Therapist, (Dog Ear Publishing, 2013, US $14.95) by Manhattan psychotherapist Will Meyerhofer, utilizes a Swiftian science fiction conceit as a pretext for a thoughtful meditation on love, shifting cultural mores concerning gender and sexuality and psychotherapy itself. The conceit in question is blue.

Blue is the color of Sherwin, or, to use his real name "Tzai-uorli-guo-jirngum-dah," a "xenolinguist" from the planet Qardashah who "trans-stitiates" into the Battery Park consulting room of "Will," a self-proclaimed "mild-mannered" psychotherapist who bears, quite noticeable similarities to the author in question in this not quite roman à clef.

Sherwin was just... blue. Depending on the light and the angle, he changed shades, darker in the hollow of his neck, lighter at his wrist, a gloss finish on his knuckles -- a bit more matte on his palms -- but blue. Blue blue blue.

Sherwin, while ostensibly on Earth to study its "sub-primitive" denizens and their barbarous culture, has developed an obsession with the practice of psychotherapy as a "healing technology" and, more viscerally, the not-infrequently Jewish practitioners, like Will, of this "impossible profession." To wit, as Will says, Sherwin is a "Matzoh Queen." For the un-initiated, that's a gay person who desires the, er, intimate company of those of Jewish culture and/or background.

Not only has he been doing fieldwork studying Will and his practice, he's come in peace to get some head-shrinking particularly concerning his relations with his hyper-intellectual and, literally and figuratively, quite distant Qardashian family. Oh, and to profess his love and lust for Will.

Now, there's a nifty conundrum for any mental health professional. But Will is not your average, "And how do you feel about that?" psychotherapist. Quite to the contrary, narrative scenes trace the unfolding relationship of Sherwin and Will as they development intimacy and planet hop, which eventually leads to overnight in The White House's Lincoln Bedroom. Mary Todd must have been orbiting at hyperspeed in her celestial resting place. The plot alternates with musings about the nature of therapy, healing, and the opportunities and challenges of, in this case a profound understatement, "mixed" marriages.

Meyerhofer's expansiveness of thought and progressive ideals are given a nifty pretext for exploration in this inter-stellar romance which will likely appeal to Anime enthusiasts, writer's of science fiction fanzines, and psychotherapy clients and practitioners alike. Although written with tongue firmly in sexy blue alien buttcheek -- the novel opens with an eye-opening anilingual prologue which vividly establishes Will's sexual bone fides -- the author is clearly serious in his admirable desire to pull down Shibboleths of therapy and its healing aims, as well as cultural prejudices that divide people, families, nations, and, who knows?, perhaps species and solar systems as well.

Christopher Murray, LCSW-R, is a psychotherapist and writer in Manhattan and can bve reached via Christophermurray.org.