Our democracy's decisions should reflect voter views. But we are using a bad system: essentially "name one candidate, then shut up." Political scientists call that the "plurality system" (British: "first past the post").

That's a flawed system for evaluating true popular sentiment. It only can know what each voter thinks about just one candidate, ignoring their opinions about everybody else.

The 2000 US Presidential race demonstrated these flaws. If your favorite candidate was Nader, then voting honestly was stupid since your vote would be wasted. Ditto if your favorite was Patrick Buchanan, another third-party candidate. That risk of a wasted vote was why 90% of the voters whose favorite was Nader or Buchanan voted for somebody else altogether in 2000. So not only does the plurality system first tell you it just doesn't care about and doesn't want to hear your opinions about anybody besides just one candidate, it then also incentivizes you to lie about even the mere sliver of information it does solicit.

The system rewards NOT telling the truth about who or what you really want.

That often causes the most popular view to lose because of vote-splitting. Indeed, that's exactly how George Bush Jr. won the presidency in 2000. Unfortunately Bush left office with the lowest approval rating of any president ever -- 22%. Hundreds of thousands of dead Iraqis, over four thousand dead Americans, and a financial crisis, testify that the cost of such distortions of public sentiment can be very high. We need a better voting system.

Among people who study voting systems, ours ranks very low indeed. In fact, none of the participants at the Voting Procedure Workshop in Normandy, France in 2010 -- academics and professionals who research voting systems -- rated plurality an acceptable system, out of the 18 systems they considered. As these experts well know, our system can easily elect the candidate a majority of voters consider worst.

For anybody aware of the plurality system's flaws, the current US presidential race screams failure. Donald Trump, as a famous billionaire narcissist with an unduplicatable style, does not need to worry about his vote being split with a similar rival. Many of his rivals, however, resemble each other and hence naturally will split the vote. Trump merely needs to keep it that way to win, and to force voting for them to be a stupid vote-waste risk. Then Trump will win even if 70% of the voters hate him. By using this strategy, Trump would be imitating Arnold Schwarzenegger's victorious 2003 campaign for Governor of California.

Unfortunately electing candidates who win only because their rivals have split support, often works poorly.

In July 2010 when the "Governator" approached the end of his legal term limit, he had the lowest approval rating (19%, with 71% disapproval) of any California governor ever. See a pattern?

The system the Normandy workshop rated top among the 18 they considered, instead was "approval voting." In this system, each voter approves or disapproves of each candidate, not just one; the candidate with highest approve versus disapprove ratio wins. The approval system does away with "spoilers" -- if you approve Nader, that doesn't stop you from also approving Gore; so Nader does not hurt Gore unless he wins. With approval, in contrast to our system, there is no longer such a thing as "vote splitting" -- or the "wasted votes" pathology -- and no ballots are ever ruined by "overvoting." In the "approval" system, it's never stupid to approve your favorite. "Score voting," in which voters rate each candidate on a numerical scale (e.g. 0 to 9; highest average wins), appears even better than approval voting for reflecting public sentiment. Neither is a radical departure: ancient Sparta and Renaissance Venice used these methods for many centuries. These nations flourished.

And even the United States used a more approval-like system for its first four presidential elections. Again, a good time for leaders.

In both of these much better systems, voters can actually say what they think about more than one of the 16 top Republicans, thus yielding a winner more likely actually to reflect their thinking. If the purpose of an election is to elect a good candidate, then a voting system actually allowing voters to say how good they are, seems helpful.

These other systems elicit far more information, with much less incentive for voters to lie, and in a way that inherently decreases the importance of huge money.

The media is now publishing mainly plurality style poll results purporting to show Trump and Clinton are far in the lead. But back in undistorted reality, the approval style poll results show something very different -- Trump is in 12 place! You can see this in the data table below. 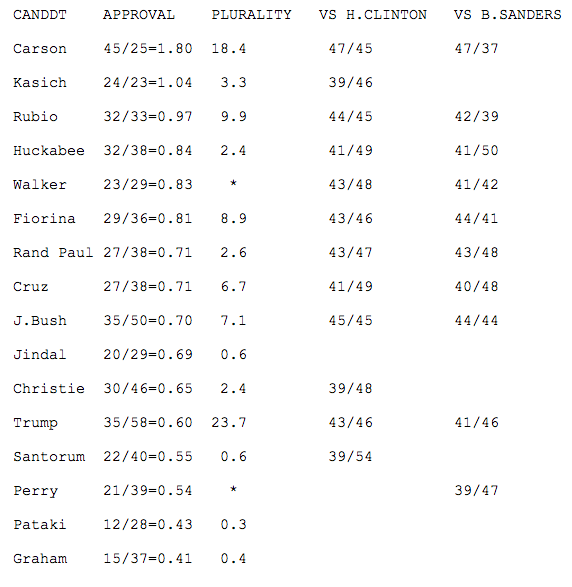 Also, Sanders is ahead of Mrs Clinton with "approval" polling: 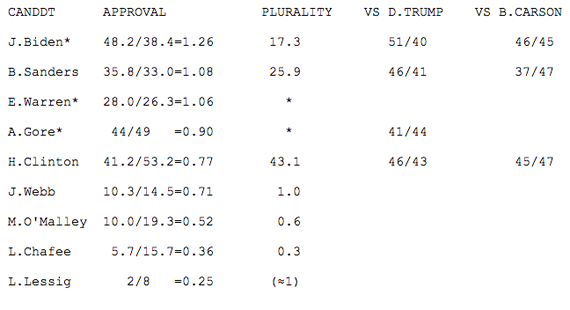 *Has announced withdrawal from race or suspension of campaign; or never entered race (but nevertheless often included in polls).

Each party could gain a strategic advantage over the other by simply changing its own primary to work on the basis of 'score' or 'approval' -- thus yielding for that party a nominee more likely to win. The Republicans are practically committing suicide by using the plurality system for nominating (and plurality polls to determine debate eligibility) since the head-to-head data show that Trump has worse chances against Democrats than 4 to 7 of his Republican rivals.

The USA could do something really dramatic -- it could lead the world in democracy (and I'm talking about real, not fake, democracy) -- by switching to a system actually good at reflecting people's wishes.

Dr. Warren Smith is former president of The Center for Election Science; he has a PhD in mathematics. For more information see http://scorevoting.net.

Fmr. president of The Center for Election Science