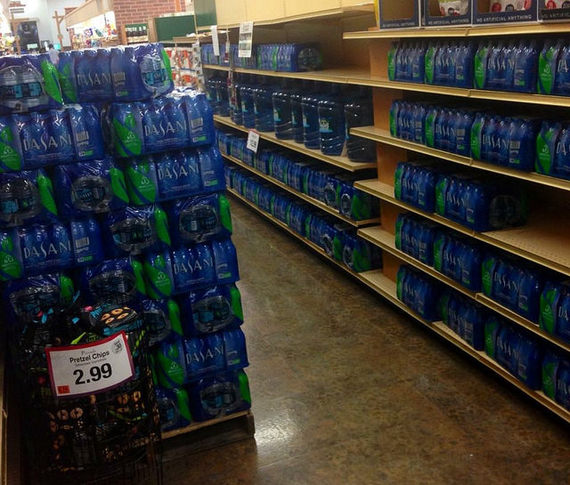 When E. Coli was detected in the water supply of Wellesley, Massachusetts in August 2014, the official response was swift and comprehensive. Urgent emails were sent, warnings were posted, and duct tape blocked off public water fountains. Signs outside of supermarkets reassured panicking yuppies that more bottled water was en route, in the event the mountains of Perrier started to run low. The Starbucks in the center of town was regretfully reduced to a pastries-only menu. Concerned neighbors went door-to-door. It was something to talk about -- there was no chance anyone had missed the memo in the onslaught of phone calls and emails. Within two days, the boil-water order was lifted. The ethos of a town in distress was captured in a single tweet: "The long nightmare is over. #WellesleyWater."

Full disclosure: my family has lived in Wellesley for the past few years. When I visit them, I walk around the manicured, Tesla-lined streets in a state of mild anxiety, convinced I am loudly emitting student-debt-riddled, single-mom vibes. The Boston suburb is 84.6 percent white, has a median household income of $159,167 and is the second-highest educated town in America, according to Forbes. Welleslians played to type as they weathered the contamination event in full capitalistic glory, subsisting bravely on croissants and cake pops, reassured by the apocalyptic levels of bottled water at Roche Bros. Case in point: 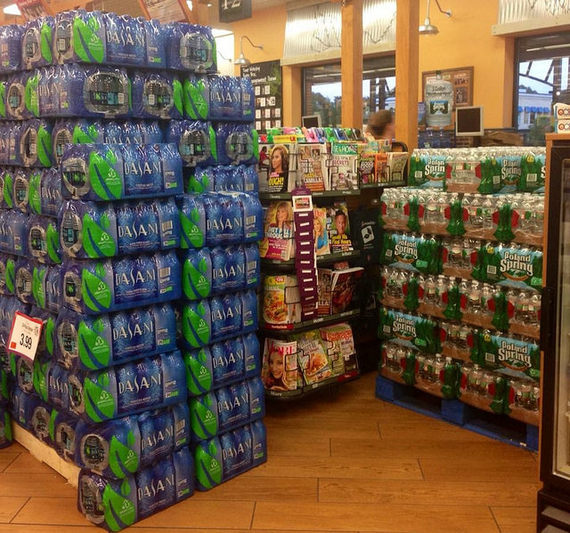 Looking through Twitter feeds from the fateful two days, it's hard to separate satire from reality. Rich people can be enigmatic that way. Residents tweeted about running into their neighbors as they bought water at Whole Foods, frustrated and annoyed by the lack of local government transparency. It seems transparent, however, when DPW workers heroically dash through town, taping shut every visible public water source -- no cloak and dagger municipal dealings here!

State and city governments will not let the affluent professional classes go without clean water. And rightly so. This is America, where we enjoy efficient plumbing and clean, drinkable tap water. In the words of billionaire rap mogul Jay-Z, "Water is free." Right? Actually, wrong. It may feel free to those fortunate enough to drink designer bottled water, leaving that tap stuff for washing dishes and watering the plants. To be sure, people of all socio-economic classes expect that water from the faucet will not poison them.

In April 2014, Flint, Michigan's water supply switched its source from the freshwater Great Lakes to the Flint River, a historically stinking repository of industrial runoff. This was all in the name of "fiscal responsibility." By summer, residents started complaining about this new tap water. It smelled foul. It tasted foul. Children broke out in rashes after bath-time; ears bled after showers at the YMCA. In early September, a boil advisory was issued. Even after the city had reportedly flushed out water contamination, it was clear that something was very, very wrong. General Motors stopped using water from the river after they saw car engines eroding. By the time serious testing took place and dangerous levels of lead were detected in Flint's water supply -- it was too late. The effects of lead poisoning are irreversible. The population never had a chance.

Flint is a poor city. Over half of the residents are African American (as opposed to Wellesley's 2 percent). According to the U.S. Census, 41.5 percent of the population of Flint lived below of the poverty line between 2009 and 2013. A mere 11 percent of Flint's inhabitants have a bachelor's degree. Researching the crisis, there's not a wealth of potentially satirical tweets about Whole Foods to sort through. The people of Flint can't gossip and joke and revel in the melodrama of a boil-water order, because they are poor and they are trapped. This is the end result of the anti-tax, "let's shrink the government" rallying cry of the Republicans.

Mothers in Flint cried for their children's lives. Not for days, or months, but years. Nobody listened. This is a human right's crisis. The burden has fallen on the disenfranchised men and women who will carry the effects of this toxic water into the next generation. Michigan Gov. Rick Snyder remains in power, free to trample over the lower classes with impunity (as long as he says he's sorry -- eventually). He is even praised by fellow bigwig Republicans like presidential nominee Jeb Bush. Welcome to America 2016, a country so blatantly rigged in favor of the wealthy that it reads like a dystopian novel. If you're poor or African-American in the sweet land of liberty, watch out for poisoned rocks and rills. I'm not proud of it.