Next time LEGO wants to launch a line of toys for girls, they might consider speaking to 3-year-old Cecilia. Instead of going the pastel hair salon route, this preschooler is mashing up mini-figure parts to make her own "Badass Lego Girls." 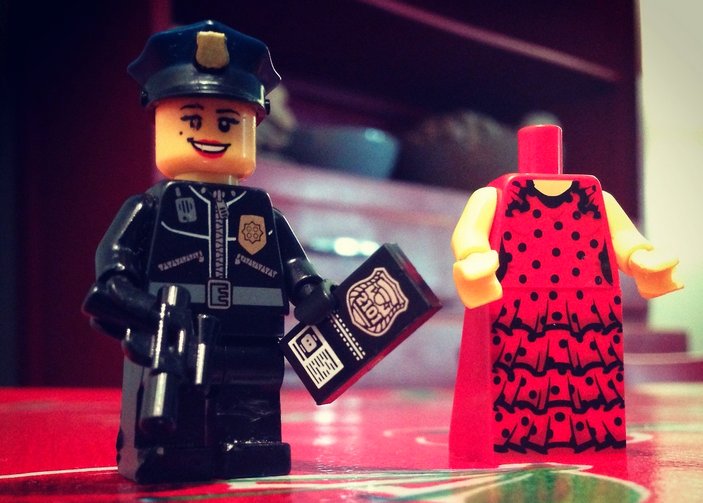 Cecilia’s mom, Julia Fierro, has been posting photos of her daughter’s creations on Tumblr. Each character is a female LEGO head with a male body and male accessories.

"She intentionally picked accessories that had come with male figures -- and also that we, as a society, identify with male gender roles. For example, weapons like bow and arrows, guns, swords, or a police badge and cuffs, or a knight's armor,” Fierro told HuffPost over email. “Her 'girl' LEGO recreations came out looking like warriors and soldiers. Most of them are her 'superhero girls.’"

The project started for fun, Fierro said. But she and Cecilia had to dig deep in their LEGO bin to find the female heads, and when they went to buy more, the mini-figure packs (which come sealed) were always all male. "My daughter was a little disappointed by that, but not deterred,” Fierro said.

According to Scientific American, the gender ratio of mini-figure models is roughly 4:1 in favor of males and the girl toys often play into stereotypes -- with the exception of a recently released female scientist mini-fig.

LEGO says it has attempted to appeal to more girls with their line, LEGO Friends. But parents petitioned the creation of the line itself claiming the toys would only further reinforce gender stereotypes. At the time, Sarah Maida (mom of then 4-year-old Riley whose rant about gender marketing went viral), told HuffPost, "I have no problem with them making pink LEGOs, but I really hate the message they send. [Riley] doesn't need to be building a hot tub and serving drinks. I want her to build whatever she wants. We want her to be herself."

At least one company is trying to break the mold by creating non-stereotypical building blocks for girls. Engineer Debra Sterling founded GoldieBlox, a toy company that seeks to inspire the "next generation of female engineers."

And now, Julia’s friends who have young girls have started creating their own girl warriors, villains, gladiators and superheroes -- and sending her pictures of them.

"There is something essential in sharing these photos, in talking about what might need to be changed in the way we still think about our girls. Girls who, sooner than we can imagine, will be women," Fierro said.

Perhaps Riley can lead their playgroup?

Click through the gallery below to view some Badass Lego Girls.

Badass Lego Girls
More:
ParentsToystoys-for-girlsGirls In Stem
Newsletter Sign Up
Raise the kind of person you'd like to know
Subscribe to our parenting newsletter.
Successfully Subscribed!
Realness delivered to your inbox