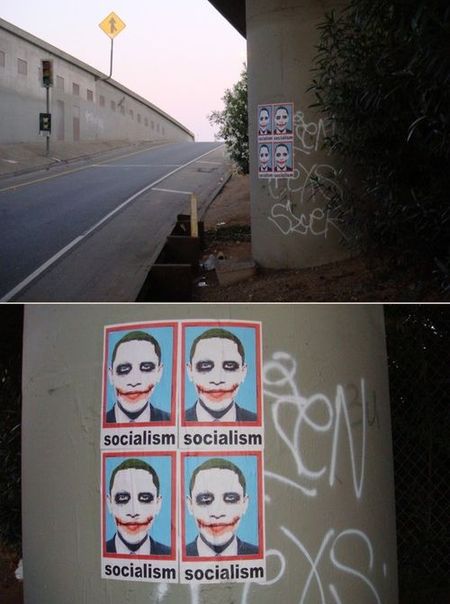 If Obama's election invited the dream of a new era of post-partisanship, that's a harsh light suddenly streaming through the window. The craziness might just be orchestrated by a narrow targeted effort and then amplified by the far right internets. Either way, though, it feels like a swarm -- as evidenced, for example, by the sudden inundation of screaming and all-too-synchronous sounding trolls on otherwise moderate to progressive discussion threads.

As part of the hate offensive, wingnut blogs -- starting with Newsbusters -- are trying to build buzz around this Obama poster supposedly showing up in L.A. Evoking the city's tradition of political art-via-billboarding crew, the poster riffs off Shepard Fairey's Obama poster with the one word message.

The LA Weekly, a tried-and-true left wing fixture, probably didn't know what hit them after Steven Mikulan took a back-of-the-hand to this chilling Obama as Joker (and the dead Health Ledger). Particularly lighting up the wackos, choking the discussion thread and promoting thousands of diggs was Mikulan's sign off comment: "The only thing missing is a noose."

Regarding the image specifically, I'm interested in your read, particularly Obama in chalky white face. Besides the allusion to the President as a psychopath and more insidiously, a man behind a mask, does the chalk exploit race by suggesting the man is playing at being white? What I'm also concerned about, aside from the psycho-Joker reference, is the association to violence (emphasized by the gang tags in the background), Obama with the bloody mouth and, particularly, a couple of black eyes.