The Fourth of July holiday usually brings to mind barbeques, parades and fireworks, but it is also a fitting occasion to reflect on a much bigger subject: how is it that thirteen small colonies overcame such incredible odds to evolve into a nation that has made such an enormous impact on world history? And what does this mean for the future?

Although it began in the nineteenth century in what was then Persia, the scriptures of the Baha'i Faith have some specific prayers and passages about the destiny of America that are thought-provoking.

Here is a prayer for America that was first spoken by Abdu'l-Baha in Chicago in 1912:

O Thou kind Lord! This gathering is turning to Thee. These hearts are radiant with Thy love. These minds and spirits are exhilarated by the message of Thy glad tidings. O God! Let this American democracy become glorious in spiritual degrees, even as it has aspired to material degrees, and render this just government victorious. Confirm this revered nation to upraise the standard of the oneness of humanity, to promulgate the Most Great Peace, to become thereby most glorious and praiseworthy among all the nations of the world. O God! This American nation is worthy of Thy favors and is deserving of Thy mercy. Make it precious and near to Thee through Thy bounty and bestowal. 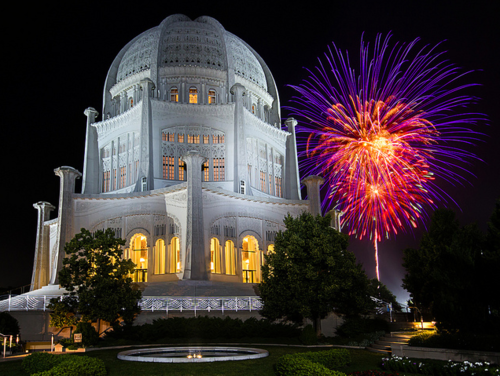 (Image: Baha'i House of Worship in Wilmette, IL on the 4th of July)

Abdu'l-Baha also said the following in 1912, some time before the League of Nations and United Nations were established:

May this American Democracy be the first nation to establish the foundation of international agreement. May it be the first nation to proclaim the unity of mankind. May it be the first to unfurl the Standard of the Most Great Peace ... The American nation is equipped and empowered to accomplish that which will adorn the pages of history, to become the envy of the world, and be blest in both the East and the West ... the American continent gives signs and evidences of very great advancement. Its future is even more promising, for its influence and illumination are far-reaching. It will lead all nations spiritually.

America has become renowned for her discoveries, inventions and artistic skill, famous for equity of government and stupendous undertakings; now may she also become noted and celebrated as the herald and messenger of universal peace. Let this be her mission and undertaking, and may this blessed impetus spread to all countries.

The first decade and a half of the 21st century have been admittedly difficult for the US and many countries in a number of ways. Shoghi Effendi, the head of the Baha'i Faith from 1921 to 1957, anticipated a long path with many potential setbacks along the way and challenges to be overcome. Some examples of these challenges include racial prejudice, which he said had "bitten into the fiber and attacked the whole social structure of American society", and excessive materialism, which he described as "cancerous" and "undermining the fabric of human society." His vision of the ultimate destiny of America, however, is dazzling.

This is from a letter he wrote in December 1938, just before World War II broke out:

Delays must inevitably arise, setbacks must be suffered, in the course of that country's evolution towards its ultimate destiny. Nothing, however, can alter eventually that course ordained for it ... such an evolution must persist until such time when that nation will, through the active and decisive part it will have played in the organization and peaceful settlement of the affairs of mankind, have attained the plentitude of its powers and functions as an outstanding member, and component part, of a federated world.

And again in 1947 Shoghi Effendi wrote:

however severe the storms that may buffet it in the days to come in either hemisphere .... that great republic ... will continue to evolve, undivided and undefeatable, until the sum total of its contributions to the birth, the rise and fruition of that world civilization, the child of the Most Great Peace ... will have been made and its last task discharged.

In celebrating the anniversary of the birth of this nation, may the perspectives contained in these passages offer our festivities an added dimension. Please feel free to share your thoughts in the comments below, and Happy Fourth!