As 2017 begins, over 5 million Baha'is worldwide are preparing for major upcoming celebrations. On October 22, 2017, in some 100,000 localities worldwide, they will celebrate the bicentennial of the birth of Baha'u'llah, the Founder of the Baha'i Faith.

The global festivities involving people of thousands of ethnic backgrounds is demonstrative of a key message of Baha'u'llah's life and teachings: that a special time has arrived for the entire human race as it gradually moves from a stage of collective adolescence to one of maturity and wholeness.

In cycles gone by though harmony was established, yet, owing to the absence of means, the unity of all mankind could not have been achieved. Continents remained widely divided ... In this day, however, means of communication have multiplied, and the five continents of the earth have virtually merged into one.... In like manner all the members of the human family, whether peoples or governments, cities or villages, have become increasingly interdependent. For none is self-sufficiency any longer possible, inasmuch as political ties unite all peoples and nations, and the bonds of trade and industry, of agriculture and education, are being strengthened every day. Hence the unity of all mankind can in this day be achieved. Verily this is none other but one of the wonders of this wondrous age, this glorious century.

How to achieve this unity of humankind, while at the same time cherishing the tremendous diversity of the world's cultures, is at the core of the teachings of Baha'u'llah, contained in letters and books spanning over 100 volumes. Luis Gushiken, a member of Brazil's parliament in 1992 when it held a special session to pay tribute to the life of Baha'u'llah, described His writings as "the most colossal religious work written by the pen of a single Man." Readers will find that Baha'u'llah's writings are particularly fascinating because, in addition to restating the essential moral teachings of all the world's major religions which have been the basis of the great civilizations past, He also wrote about global and societal issues such as statesmanship, science, collective security, the role of the news media, international language, economic issues, life elsewhere in the universe, medicine, dreams, the environment, energy, global governance, agriculture, education and many others.

The bicentennial celebrations in the villages of Battambang in Cambodia promise to be particularly noteworthy. Some hundred and forty years ago, while imprisoned in Akka in what was then Ottoman Palestine, Baha'u'llah called on His followers to raise up "houses of worship" that should be "as perfect as possible in the world of being." Over time these edifices of worship would also be surrounded by institutions of service to the community such as a hospital, orphanage, home for the elderly, and educational institutions; thus uniting the spiritual with material, and worship with service. They are open to all and programs include readings from the scriptures of all the world's religions. 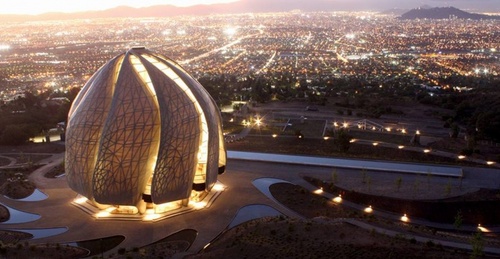 Over the past decades, these houses of worship have been raised in every continent. Particularly notable recent examples include the temple in New Delhi, India, which in some years has been ranked "the most visited building in the world", and the most recently dedicated house of worship in Santiago, Chile.

With the process at the continental level complete, it is now moving simultaneously to the national and local levels across the world. Among the new houses of worship to be raised in this next phase, Battambang's will likely be the first to be dedicated and in time for the bicentennial celebrations later in 2017. In a recent conversation I had with the architect, who is of Cambodian Buddhist background, he expressed the hope that the renewed sense of inner peace and strength to be gained by the many hundreds of thousands of visitors to this building will contribute greatly to uplifting a country that has suffered tremendously over the past few decades. He expressed optimism that with this strength his people could re-discover their remarkable potential - as evidenced by the past magnificent civilizations of Angkor Wat - to make outstanding new contributions to a dynamic, emerging global community. 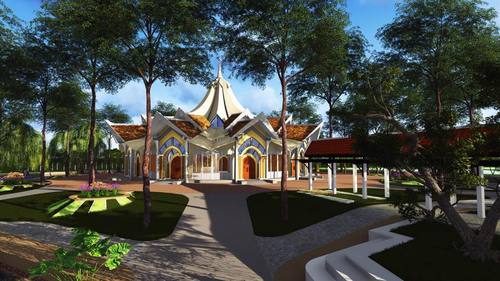 Image: Model of Baha'i House of Worship in Battambang

Battambang is the first of potentially many tens of thousands of villages and small towns around the world - most of which many have never heard of - to raise such a local house of worship. All these places have been influenced by the teachings of Baha'u'llah in recent years and have seen the flourishing of a systematic program of study and action inspired by His Writings for children, teenagers and adults aimed at the empowerment of individuals and communities.

In a cruel irony, while countless celebrations will take place worldwide and advanced plans are in motion in six additional countries (besides Cambodia) for more houses of worship, many Baha'is in the very city where Baha'u'llah was born (Tehran) will have to celebrate this historic occasion in prison cells. The many decades-long attempt of the Iranian government to eliminate the Baha'i Faith from the land of its birth is as futile as it is embarrassing to the history of a country that claims as its ancient heritage one of the earliest known charters of human rights. While the short term outlook of the Iranian Baha'is remains difficult, they are encouraged and sustained by promises in the Baha'i writings for an extremely bright future for the land and city where, two centuries ago, Baha'ullah's was born: the potential to become "the pride, the admiration and the envy of the peoples of the world."

These bicentennial celebrations will be open to all throughout the world; you can contact Baha'is in your local area for more information on how you could take part.