Within two weeks of releasing leading human rights defender Maryam Al Khawaja from jail the Bahrain authorities detained another. On September 30 Nabeel Rajab was taken into custody for allegedly insulting the Bahrain regime on twitter.

Rajab has been exposing human rights violations by the U.S. ally for many years and spent from mid-2012 to mid-2014 in prison on trumped-up charges. He's hit a nerve again, tweeting that Bahrain's security forces act as an ideological incubator for ISIS. Bahrain's military and police are drawn almost exclusively from the Sunni sect, with the majority Shia population virtually shut out of the services. Rajab's September 28 tweet came days after news of a Sunni Bahraini security official leaving his job to join ISIS. 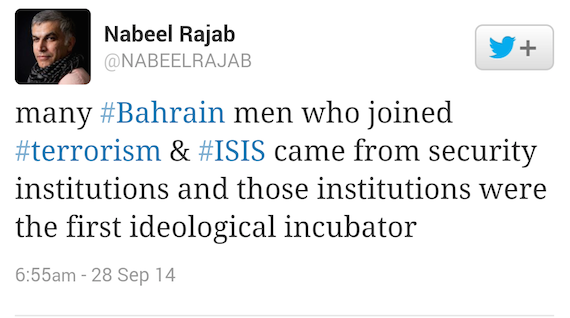 The lack of security force reform in Bahrain has been a source of political unrest in the kingdom for years, and although parts of the U.S. government have tried to push for human rights progress the messages from Washington have been inconsistent and contradictory. Bahrain is part of the military coalition fighting ISIS but its own history of violent sectarianism has been largely overlooked by the Obama Administration.

Rajab's lawyer Jalila al Sayed told me "It's hard to predict what will happen with this latest case against Nabeel, but there is a real chance he could face several more years in prison for his tweeting." His trial is due to open on October 19, coincidentally around the time rumored for the return visit to Bahrain of State Department official Tom Malinowski who was expelled from the kingdom in July after meeting opposition leaders.

Those U.S. officials who have tried to engage the Bahrain regime on reform often speak of incompetence, unkept promises, and mystification about who's really in charge in Manama. Hearing the private exasperation of State Department officials dealing with the Bahraini government over the last few years reminds me of British political leader Winston Churchill's complaint that negotiating with Irish nationalist leader Eamon De Valera was "like trying to pick up mercury with a fork".

Manama appears to have calculated correctly that Washington's military priorities will trump its embarrassment on human rights, perhaps even more conclusively now Bahrain is part of the anti-ISIS effort. The State Department's primarily reliance on private diplomacy with Bahrain clearly hasn't made much headway on human rights and it needs to adopt another plan.

De Valera countered Churchill's irritation by suggesting he try using a spoon, and Washington can signal a change in tactics tomorrow if it really cares about pushing for reform in Bahrain. Calling publicly and clearly for the release of Nabeel Rajab would be a start.

Update: On October 16th, the U.S. State Department urged the government of Bahrain to drop the charges against Rajab and resolve the case. Rajab's trial opened on October 19th and was adjourned until October 29th.