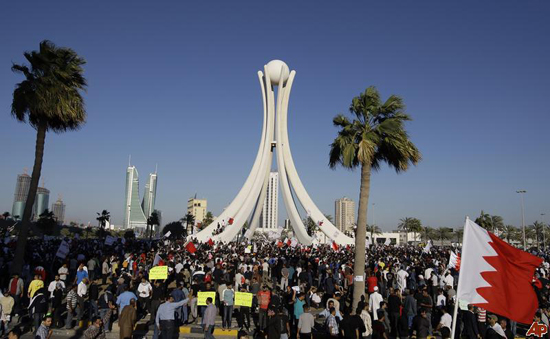 The Pearl Monument on the Pearl Roundabout, Bahrain, February 19, 2011.

Last week the New York Times ran an article with a headline more obvious than insightful: "Bahrain losing its edge as finance hub." Even before Shia demonstrations started to rock Bahrain in February, the island country had already lost its financial primacy. The article, however, revisits a formula that has driven the Gulf through the last century: the deferral of political interests to the economy. Gulf countries try to function as apolitical financial forces for the sake of peace. Whether or not this attempt can ever work, ongoing turmoil in Bahrain has shown political mishandling can certainly hurt the economy.

On March 18, the Bahraini government demolished the Pearl Monument at the Pearl Roundabout, where the past month's demonstrations had taken place. Even the roundabout itself was scheduled for removal. Within an afternoon, a political place and symbol of the uprising were removed.

The Guardian's man-in-the-street (quotation above) refers to the fact that the Shia uprising continues despite the loss of a symbol. What's more, a symbol of unrest might be gone, but Bahrain is far from being stable again. There are continuing reports of arrests, disappearances and quelled demonstrations.

But is symbolism really worth nothing?

The roundabout, or traffic circle, has several meanings for Bahrain. It represents the strides of modernization that the British presence unfurled in Bahrain in the 1960s. Though it is not a British invention, the roundabout represented British development, principally of towns outside British cities. Not suitable for cities, roundabouts were for secondary economies; importing them to Bahrain said what British engineers thought of Bahrain's future. Though a master plan did not exist during Bahrain's modernization, British planners and engineers prescribed a regimen of traffic circles as a means to maintain smooth but controllable development. By the 1970s, Bahrain had about forty roundabouts and since then the number has not exceeded much beyond fifty.

Roundabouts also offered Bahrain another advantage: open space without extending those spaces for human use. An expanse of green parkland is isolated by an undying stream of traffic. Landscaped with follies and plantings, roundabout circles are not places; they are voids. In other words, Bahrain might have green spaces, but there are few public spaces needing to be monitored (see this previous article).

Unlike Cairo's Tahrir Square, the Pearl Roundabout held little significance for Bahrain before 2011. There are no significant landmarks on its circumference. It is a place marker without a place. It is only a marker of time between places: "I'm now driving past the Pearl Roundabout, so I should be there in 15 minutes." Since there was no significant public space in Bahrain, the demonstrators created one. The Pearl Void became Pearl Square.

In the process, the 'Pearl Monument' became the unwitting anchor of the movement. Before that, it too was an empty symbol, erected in 1982 to commemorate Bahrain's hosting a summit of the six Gulf countries. The event is as much forgotten as the sculpture's simplistic symbolism: six curved columns (the sails of ships), represent the six Gulf countries and support a sphere (a pearl), representing the region's ancient sea-faring economy. Sails and pearls have shifted from being regional symbols to overlooked clichés. Symbolism, in this case, did mean nothing. Instead of sails and a pearl, people perceived an odd icon in a city without many icons. By appropriating the 'Pearl Monument,' occupants demonstrated something else: how quickly an empty symbol can take on real meaning. 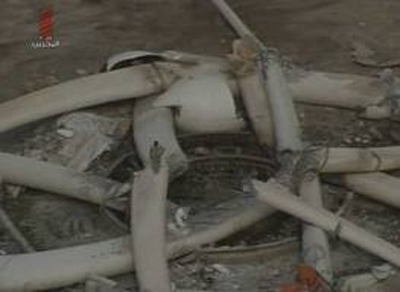 Demolition of the Pearl Roundabout, March 18 2011.

The only video footage of the Friday demolition seems to be from a Bahraini state-run television channel. A motorcade of extra-large dump trucks encircles the vacated roundabout. These are the kinds of dump trucks one associates with land reclamation in the Gulf. But another kind of reclamation was scheduled. Mechanical diggers chomp at the feet of two of the columns until their instability pushes the other columns toward collapse in helix formation. As the 'pearl' on top begins to teeter, preparing for its pulverizing fall, the footage cuts to moments later when the pieces have fallen to the ground. The video pans a still image of the collapsed monument which looks like what remains when the trunks of date palms have been burned and reduced to white ashes. The still image is a new symbol for Bahrain.

It is an image of destruction. By no means an auspicious symbol for the Bahraini government, but it does work to the authority's advantage. It suggests an ending, when things are hardly over. The conflict continues, but dissipated, unlocalized, untelevised.

Without missing a beat, the government provided an explanation for the destruction of the roundabout: a need to ease traffic problems. The roundabout is to be replaced by traffic lights, a modern upgrade from a dated roundabout. City planners have demonstrated before that traffic jams can be measured in lost profits. By tearing down a roundabout, Bahrain tries to say it is just being a Gulf state, preferring the economy over politics. This action won't save Bahrain's economy though. Symbolism means nothing, but it can be so powerful that it needs to be taken down.