On Sunday, police in the tiny Persian Gulf monarchy of Bahrain arrested four American journalists as they were reporting on the political situation in the country. Of the four, only Anna Therese Day has been identified, but all were charged with "unlawful obstruction of vehicles and attending unlawful gatherings." After two nights in detention, they were released on Tuesday and deported back to the US.

Although the crew's release is cause for joy, many more Bahrainis remain behind bars in this tiny Middle Eastern state that is also a close ally of the West. Of the many prisoners of conscience, there are at least 10 Bahraini journalists in prison, their only crime having been challenging the absolute monarchy's rule. Dozens more have been detained, tortured, harassed, or forced into exile over the last five years, in addition to the thousands of activists and ordinary people who have wound up in jail as well.

The repression is part of a larger policy of crushing dissent that the Bahraini government has followed since 2011, when hundreds of thousands joined a popular uprising demanding freedom and democracy. 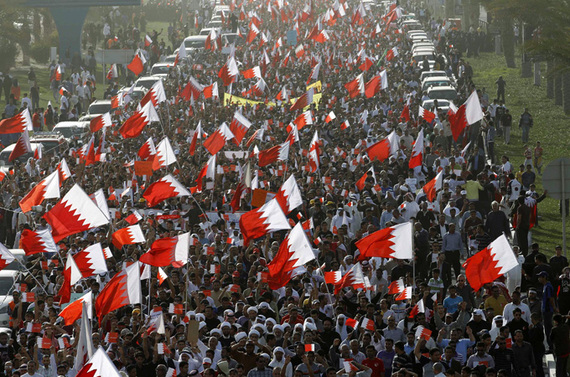 The American crew was arrested on the fifth anniversary of the day it all began, Feb. 14, 2011, when by some estimates around half of the country of 1.3 million people took to the streets. The uprising was by far the most widespread in modern Bahraini history, bringing together many different sectors of society - secular and religious, Shia and Sunni, from all different class backgrounds - united in the hope that their homeland could taste freedom for the first time since independence from British rule in 1971.

But the regime - controlled by the al-Khalifa family, which has been in power since 1783 - had different plans. The Bahraini regime took action against protesters quickly, as demonstrations grew larger in the capital, Manama, as well as in towns and villages across the country.

Dozens were killed in the weeks that followed, as police broke up demonstrations, tore down protest camps and beat up demonstrators, arresting thousands who took part. In April 2011, Saudi Arabian forces even got in on the act, entering the country at the regime's behest to help crush dissent. More than 80 were killed over the next two years, as local protests persisted on an almost daily basis.

Over the following months and years, hundreds of dissidents fled the country in fear, as their colleagues were locked up and the bounds of acceptable public speech were drastically curtailed. Doctors and nurses were even jailed for treating protesters wounded by the police, in a horrific perversion of justice that offered a startling indicator of how dangerous and repressive the Bahraini government really was. 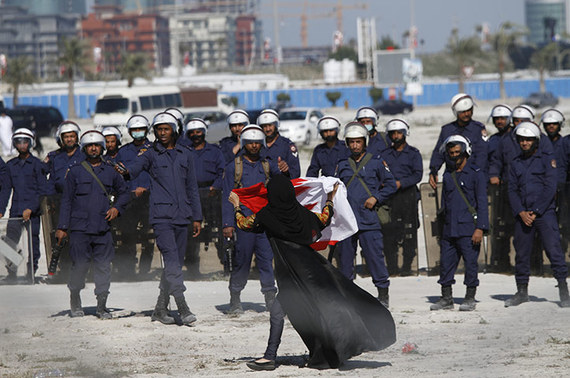 All of this occurred with the support of the United States, which maintains a major military base in Bahrain and steadfastly opposed any moves that might destabilize the country - which any expansion of freedom for the country's citizens would undoubtedly do, given the current regime's repressive nature. In the months before the uprising began, the US even sold $200 million in weapons to the regime.

The US thus helped crush a popular revolt for freedom in Bahrain and supported its ally Saudi Arabia in carrying out the dirty work. The United States was not alone in this regard - the United Kingdom is also notoriously close to the Bahraini regime, having sold the country more than $60 million in weapons since the outbreak of the Revolution.

Today, amid the ongoing conflict in a number of countries across the region, it is easy to forget that things were not supposed to end up like this. The example of Bahrain shows just how much the desire for freedom and democracy is widely shared across the Arab World, but how in many places it has been quashed by repressive forces with the complicity of the Western powers.

Having been for the last five years beaten, tortured, exiled, and killed by their leaders and ignored by the world community, Bahraini dissidents are today left with few options for reforming their country.

And yet, in Western political discourse it is sometimes asserted that Arabs or Muslims are unready for democracy. What more could Bahrainis have done to show how ready for democracy they are than leading months of protests and articulating very clear demands for greater liberty? It is an extreme irony of our present situation that in countries like the US where government support for repressive Arab regimes has been greatest, many still blame the victims of those same regimes for the repression and violence they are forced to endure.

The consequences of ignoring the Bahraini revolution have been grave for the region. The Bahraini government is ruled by a small clique dominated by Sunni Muslims that refuses to offer the Shia Muslim majority of the island equal access to opportunities, jobs, and political representation. To add insult to injury, the regime even sponsors Sunni Muslim citizens of other countries to move to Bahrain and become citizens in exchange for loyalty, in order to help change the demographic balance in their favor. Because of the country's demographics and the fact that they bear the brunt of government policies, the majority of protesters were Shia Muslims.

While many in the West - including President Obama - have a tendency to imagine sectarian divisions in the Middle East as dating back thousands of years, the example of Bahrain reveals how much the conflicts across the region today are a product of very specific political decisions taken for very specific reasons of political interest and gain.

Behind many of these decisions is US support. And if there is one thing that Western governments should know by now, it's that supporting repressive regimes in the Middle East will always come back to haunt them.

Anna Therese Day and her crew were in Bahrain to help offer a voice to the hundreds of thousands of Bahrainis who took the streets only to see their dreams crushed. Despite Bahraini government allegations, it seems the crew's only crime was to film the many activists who continue struggling underground for change.

While we celebrate the journalists' release, let us not lose sight of the larger picture, and of those bearing the brunt of US support for Bahrain's autocracy.

While we rejoice in the crew's freedom, let us remember the hundreds of thousands of Bahrainis still waiting for their day to come.