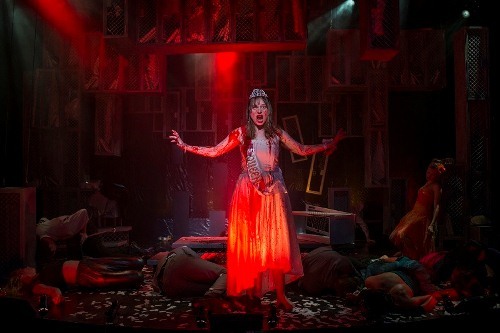 There are essentially two reactions I get when telling people I'm going to see Carrie: The Musical:

- Reaction 1: People who know the musical's sacred lore as one of the biggest flops in musical theatre history and are incredibly pumped to find out how truly bad the show was/is.

- Reaction 2: People who look back as me quizzically and say something along the lines of, "That Carrie? They made a musical out of that? Why?"

Both are valid responses. However, I'm mostly pleased to report that Carrie: The Musical, as presented in the Chicago-area premiere by Bailiwick Chicago, is a fine production of an ok musical. Sure, the show was a "so bad it's good" mess when it opened -- and quickly closed -- on Broadway in 1988. Despite landmark performances from a young Linzi Hateley and a ferocious Betty Buckley, the show drowned in its own excessiveness and obscene misdirection and became a cult classic survived through YouTube clips and audio bootlegs. Then, in 2012, the musical's authors retooled the show to become a more intimate exploration of teenage angst, fears and love, with the telekinetic undertones taking a backseat for emotional truth.

In the true Chicago theatrical tradition of rock-solid ensemble acting, director Michael Driscoll has elevated the material to a level that I'm sure will surprise many who plan to attend this for a campy, bloody good time. Most of this is due to the outstanding cast, which features a heartbreaking performance in Callie Johnson as Carrie White. Johnson has found a calling in portraying introverted and fiercely passionate young women, as seen in her work as the daughter in Next to Normal at Drury Lane and, to a degree, the unassuming reporter in Porchlight's Pal Joey, where she stole the show and won a Jeff Award. As Carrie, Johnson fully embodies a woman on the cusp of a huge change (budding telekentic powers aside), but not being emotionally equipped to sort it all out. While not demonstrating a rock belt that Dean Pitchford and Michael Gore's ballad-heavy (and highly uneven) score seems to require, Johnson radiates truth and emotional honesty that surpasses any vocal limitations.

Where the musical falters most frustratingly is in the narrative. Nobly, book writer Lawrence D. Cohen has worked on making this a very human story, focusing in on the relationship between Carrie and her mother (the powerful and potent Katherine L. Condit) and the angst and turmoil of being a modern teenager. Even resident school bully Chris (the delightfully evil Samantha Dubina) is given moments where we can peek into the cracks of her steely exterior. In doing so, the horror and dread we all expect from this story is packed into the musical's final 10 minutes, which jars the tone and leaves you with an unsatisfying aftertaste. It also doesn't help that Driscoll's otherwise solid staging of this pivotal scene is clunky when it should be chilling.