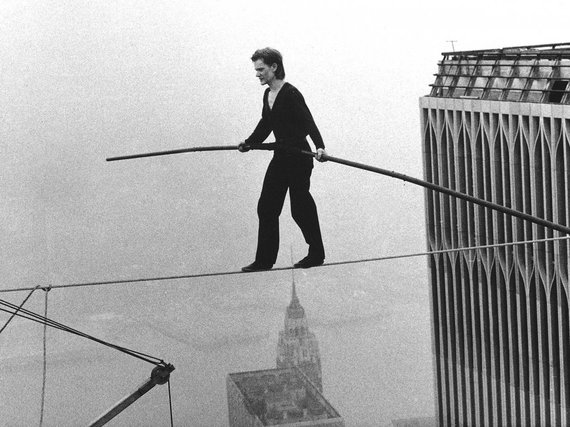 I was watching a fabulous documentary on a high-wire artist, Philippe Petit.

It was about how he found a love of finding balance in the oddest of places. Over cities. Across cathedrals. Over mountains and valleys. In the backyard of his own home.

It's a lost art. Generations before us, all had tightrope artists. They didn't exactly give Mickey Mantle a run for his money, but people knew who they were. Charles Blondin. Farrell Hettig. Bird Millman of the Ringling Brothers.

Politics, and news, and conversation is yanking us to the other ends of the spectrum.

To the extremes. Turn on your TV, or the radio in the car, or itch around the Internet. There is a smorgasbord of folks with big opinions on the far-right and far-left, barking how they've got it all figured out and how anybody not listening to their channels or stations or websites are all morons and dead wrong.

We're now in a media hailstorm of politicians and pundits beating the meters -- betting that emotions and feelings win the day over sound thinking, stability and equilibrium.

Balance. It's become a passive word. Yet Philippe Petit was anything but passive. He said, "Live on the edge of life. Exercise rebellion; refuse to tape yourself to rules, refuse your own success, refuse to repeat yourself, and see every day, every year, every idea as a true challenge -- and then you are going to live life on a tightrope."

Balance. Order. Logic. From my experience, the palette for the most creative and provocative moments and ideas.

I never thought a guy on a tightrope would be a reminder of how balance and getting where you're going -- are so very connected.

Balance used to be a powerful word. A word of strength. Of dignity. Of passion. Of intelligence. Of commitment.