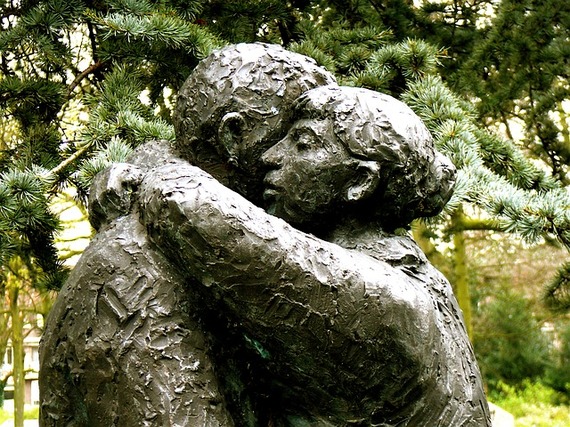 Believing in sin can be good for body and soul.

The desire to live up to divine standards can help many religious individuals cultivate successful, lasting relationships and avoid harmful addictions, some research suggests.

But too great an emphasis on the fallen nature of humankind can lead to fear, distrust and prejudice, research also indicates. In some individuals, the perceived inability to please a distant and demanding divinity can lead to overwhelming guilt and neuroses.

It is not easy to walk around life feeling condemned.

So how can believers buffer the negative effects of an unhealthy preoccupation with transgressions while benefiting from sin's appeal to humility in being able to accurately assess one's own strengths and weaknesses?

Forgiveness may be one good place to start, according to a new study.

Americans who reported experiencing being frequently forgiven by God were far less likely to show symptoms of depression and other mental health ills associated with strong beliefs in the fallen nature of humankind.

If someone has a strong view of sin, "It's clear from these findings that those who don't feel forgiven by God are pretty bad off in terms of mental health."

Prayers for divine assistance to avoid sin and to seek forgiveness for failing to live up to moral standards are a staple of many faiths, including Judaism, Islam and Christianity.

On Sundays, for example, Catholics around the world begin Mass with a penitential rite calling to mind their sins and asking the Lord for forgiveness.

In general, religious beliefs and practices are associated with several beneficial outcomes, from personal happiness to a greater commitment to lives of service.

But some religious beliefs taken to extremes can be damaging, particularly when fear and judgment crowd out love and mercy.

A new study published in the latest issue of the Review of Religious Research found "striking" results associating belief in human sinfulness with impaired mental health. The study analyzed data from the Spirituality & Health 2004 National Study of Religion and Health.

Add in forgiveness, however, and the equation changed dramatically.

The study found the more frequently individuals felt they were forgiven by God, the less likely they were to report symptoms of several mental health issues.

Looking at the beliefs in tandem, the study found that greater divine forgiveness diminished the negative association of belief in human sinfulness in seven of the eight mental health outcomes studied.

"Believing in human sinfulness is not necessarily harmful if it is accompanied by belief in having experienced divine forgiveness," the researchers found.

However, the opposite approach, believing in human sinfulness and never experiencing divine forgiveness, "is a noxious combination for mental health."

The good news is most human beings are complex, and are able to sustain beliefs in both sin and forgiveness.

Less than 1 percent of the more than 1,500 respondents in the national study had the highest beliefs in human sinfulness and experienced God's forgiveness fewer than "many times."

Yet one takeaway remains that the more the balance tips toward belief in human sinfulness and away from forgiveness the greater the potential for mental health problems.

In practical terms, this adds to several research findings suggesting that therapists may find it of value to be aware of how the spiritual beliefs of patients may be helpful to both understand their issues and offer avenues for effective treatment.

Spiritual counselors in particular may serve people they work with who are obsessed with sin and punishment by helping them become more aware of aspects of their faith professing mercy and forgiveness.

Many religious groups focus on the religious teaching encouraging members to forgive those who have trespassed against them.

But it is not a one-way street.

"Forgiving others is important," Uecker said. "But it is also important to experience forgiveness."

Test your knowledge of religion and Hell with our devilishly challenging quiz.