On Saturday night, something very special happened in Los Angeles... and it was called The Ball of Artists.

Over 20 performance art pieces took place at the majestically lit and slightly ominous Greystone Mansion -- both outside on the sprawling grounds and inside the glorious halls of the famed mansion. Music. Dance. Film. Flash mobs, tequila rooms, DJs. It was impossible to see it all but one tried - and more than anything, the splendor of walking inside Greystone's halls, down the grand staircase and fully existing inside one of Los Angeles' most historic estates gave everyone at the ball a sense of true giddiness.

The Ball of Artists was a celebration marking the end of Pacific Standard Time's 11-day performance art festival, put on by LAXART (an independent, nonprofit art space) and the Getty Research Institute. It was the first Ball of Artists in Los Angeles and it brought a comprehensive range of performance art pieces all into one grand space, for one evening. And grand it was.

Men donned tuxes; women went either chic-and-sophisticated black tie, or "artist" black tie, which left many eccentric outfits open to interpretation but stunning in a dozen different ways. Champagne was served. Bloody Mary's were handed out frozen in the form of push-pops. People danced in front of the famous bowling alley (anyone remember "There Will Be Blood?"), tasted dainty desserts in the mansion's original kitchen quarters and gazed out over the twinkling sparkling lights of our sprawling city. There were fog machines, twists and turns throughout the mansion, a jazz performance in one room, a freaky murder film in another. It was Halloween and New Year's Eve all in one.

LAXART's founding director and curator Lauri Firstenberg co-produced the ball with Richard Massey. The Huffington Post had the pleasure of speaking with Lauri the day before the event. Check out the Q&A below [SKIP FURTHER DOWN TO SEE OUR PHOTO GALLERY FROM THE BALL OF ARTISTS].

HuffPost: Saturday night's Ball of Artists is an event to conclude the PST Performance and Public Art Festival, which has been a huge initiative by the Getty and resulted in millions of dollars of grants to create exhibitions that celebrate southern California art. So it's been lots of artists recreating famous pieces, paying homage, and in some ways reinventing art. Do you believe in true reinvention? Either in art or in life?
Lauri Firstenberg: I think in the context of the festival, re-staging is the key term and concept and it is a debate curatorial and artistically regarding the re-contextualization of work in the present day - how to approach the reworking of performances and public artworks removed from their originally temporal, spatial, political, cultural conditions. Some responses to this platform have been more successful than others.

HP: How would you describe the Ball of Artists to a child?
LF: I told my 3 year old that there is an 11-day festival and that artists are producing new projects in their studios responding to a magical site called Greystone as the concluding event and when it is over I will take her to Disneyland so she can see where the princesses live and she was thrilled.

HP: What are some of the pieces you are most looking forward to seeing at the Ball of Artists?
LF: Eleanor Antin's "Before the Revolution" produced by LAXART at the Hammer Museum's Billy Wilder Theater and William Leavitt's "The Particles," which is an unrealized script the artist found in his studio that is being animated for the festival.

HP: This is the first ever Ball of Artists in Los Angeles. It has been done before in Miami. What were some of the challenges bringing it here? Or some of the excitements in bringing something like this to the City of Angels?
LF: We were lucky to have Brooke Kanter on our board who worked with the city of Beverly Hills and Friends of Greystone to help secure a magical site. The challenge is to produce an event that we haven't done before and to see how artists respond and how it is received by audiences - in this case primarily artists. Artists guide the work that we do and will determine if we will do it again…

HP: What to wear?
LF: My co-conspirator Richard put forward black tie, which creates anxiety for people in Los Angeles. The men are thrilled to bring out their tuxes and women are perplexed. I think it is up for translation.

HP: Greystone Mansion is a very famous location in Los Angeles and used to be owned by the Doheny Family. What makes this venue a particularly fitting space for the Ball of Artists?
LF: Its history. Artists are responding to the narratives and uses of the site - its relationship to Hollywood cinema. Drew Heitzler and Kerry Tribe both have new works debuting at the Ball particularly invested in their research about the mansion and the family and the sites connection to local cinematic histories.

All photos by Stefanie Keenan/Wireimage
PHOTOS FROM THE BALL OF ARTISTS: 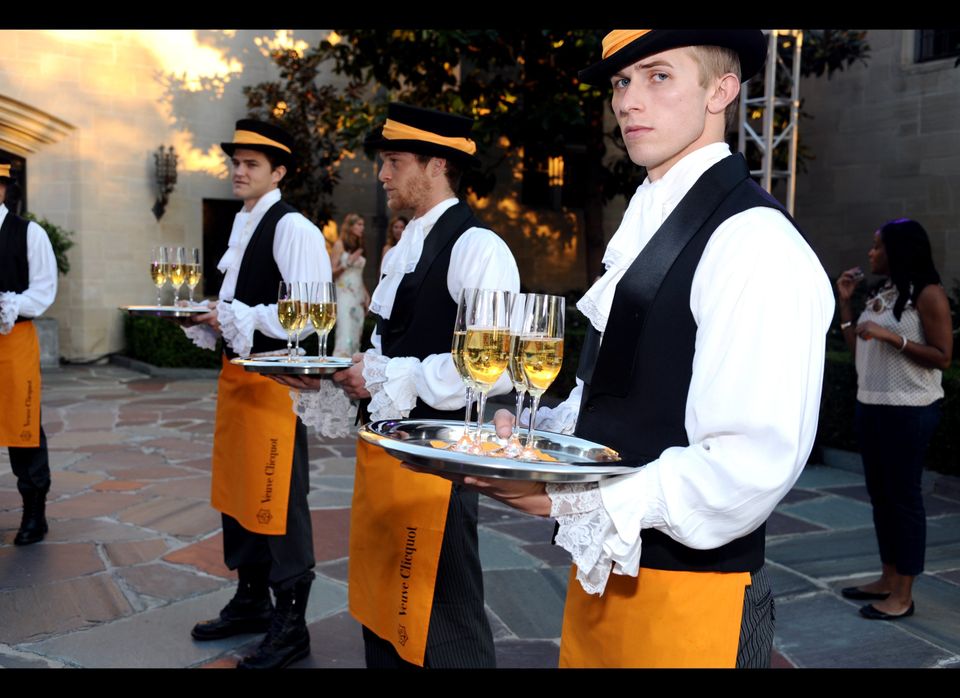