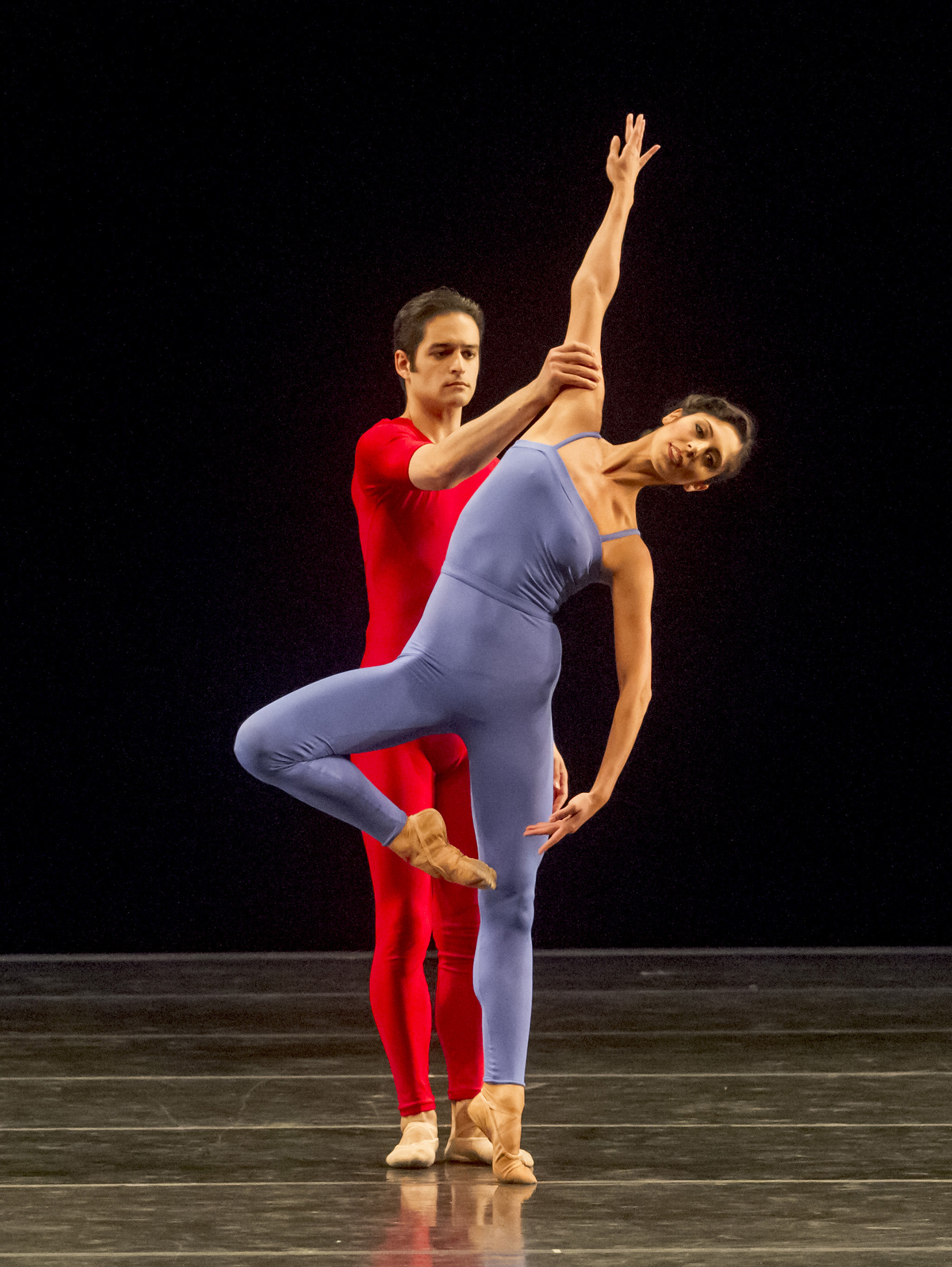 Ballet San Jose closed out its season this weekend with a powerful reminder of the influence of Merce Cunningham on today's choreographers. Not a hint of narrative on display in Program 3, just a series of fascinating comments on what dance is and why it moves us.

Cunningham's playful, mysterious Duets from 1980 eschews nearly all bravura elements of ballet. Instead it deconstructs and levels the male-female partnering relationship, examining what we really need from each other in order to maintain our balance. In this series of six strikingly different vignettes, he tells us "this is what ballet is made of" and at the same time "this is the future of ballet." Ballet San Jose's future appears to be bright indeed, as the corps and apprentice dancers who made up the greater part of Saturday's matinee cast stepped up to the Cunningham challenge with authority -- particularly the vivacious final couple, Mariya Oishi and Alex Kramer.

Cunningham restricts much of the partnering support to light momentary touches, gentle pushes and hand-holding, which requires far more strength and agility in partnering than the traditional hands-around-the-waist or hands-under-the-armpits. In one delightful moment, a woman balances on one leg while her partner graciously offers his outstretched arm. Rather than grasping it, she merely tap-tap-taps it with alternating hands. This woman doesn't need the man's support, but she is touched by his chivalry and lets him know -- in a type of Morse code, because dancers are nonverbal -- that, Yes, she is free for dinner next Friday. 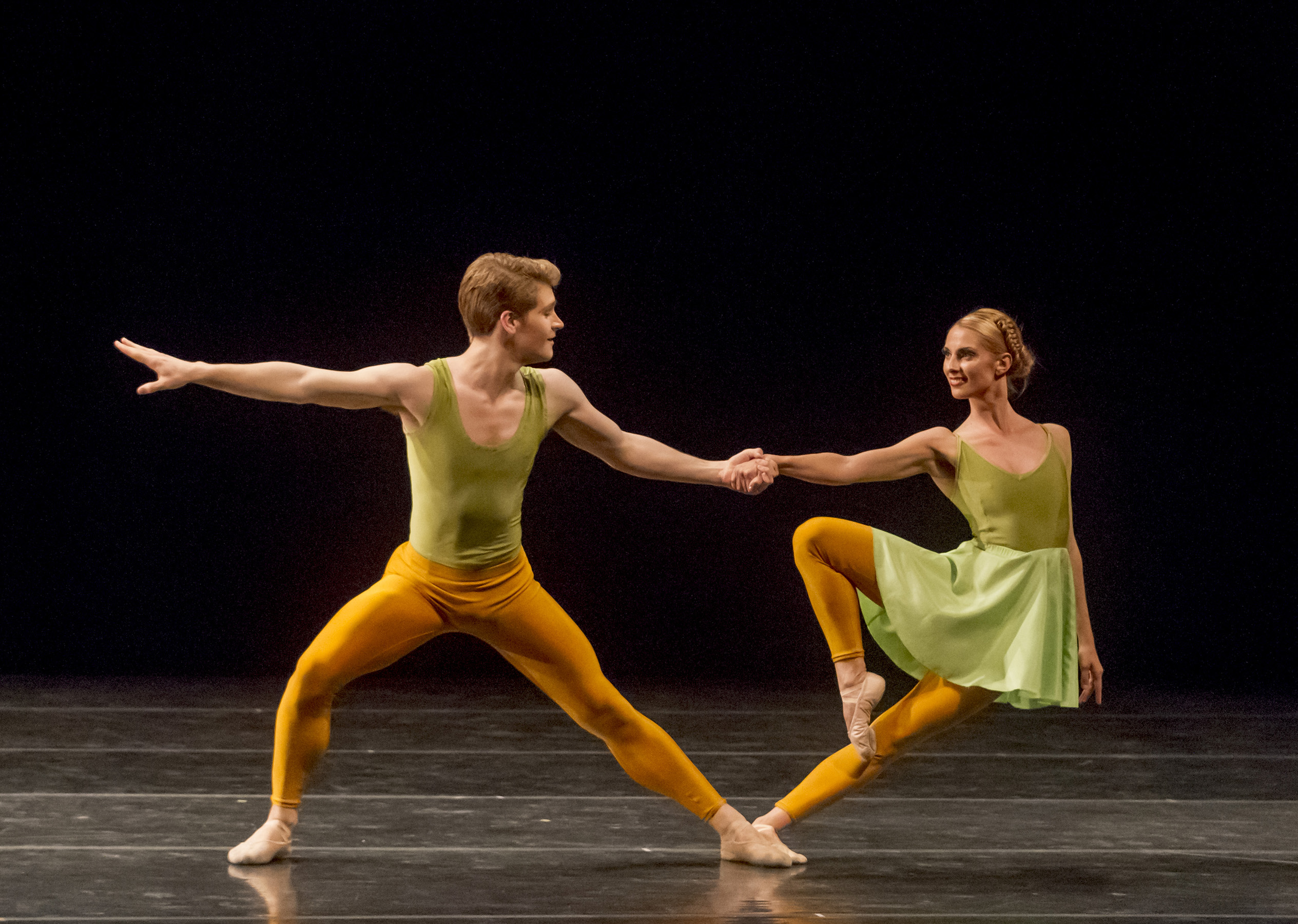 John Cage's score, the kind of noise that would normally send us in frantic search of a plumber or auto mechanic, is somehow transformed into a piece of sacred music by the dancers' brilliant sense of rhythm and timing. A feat made even more amazing by the fact that this piece is traditionally rehearsed without music, to counts or to a stopwatch. (Watch this fascinating video of former Cunningham dancer Patricia Lent as she explains the unique challenges of rehearsing for Duets.) 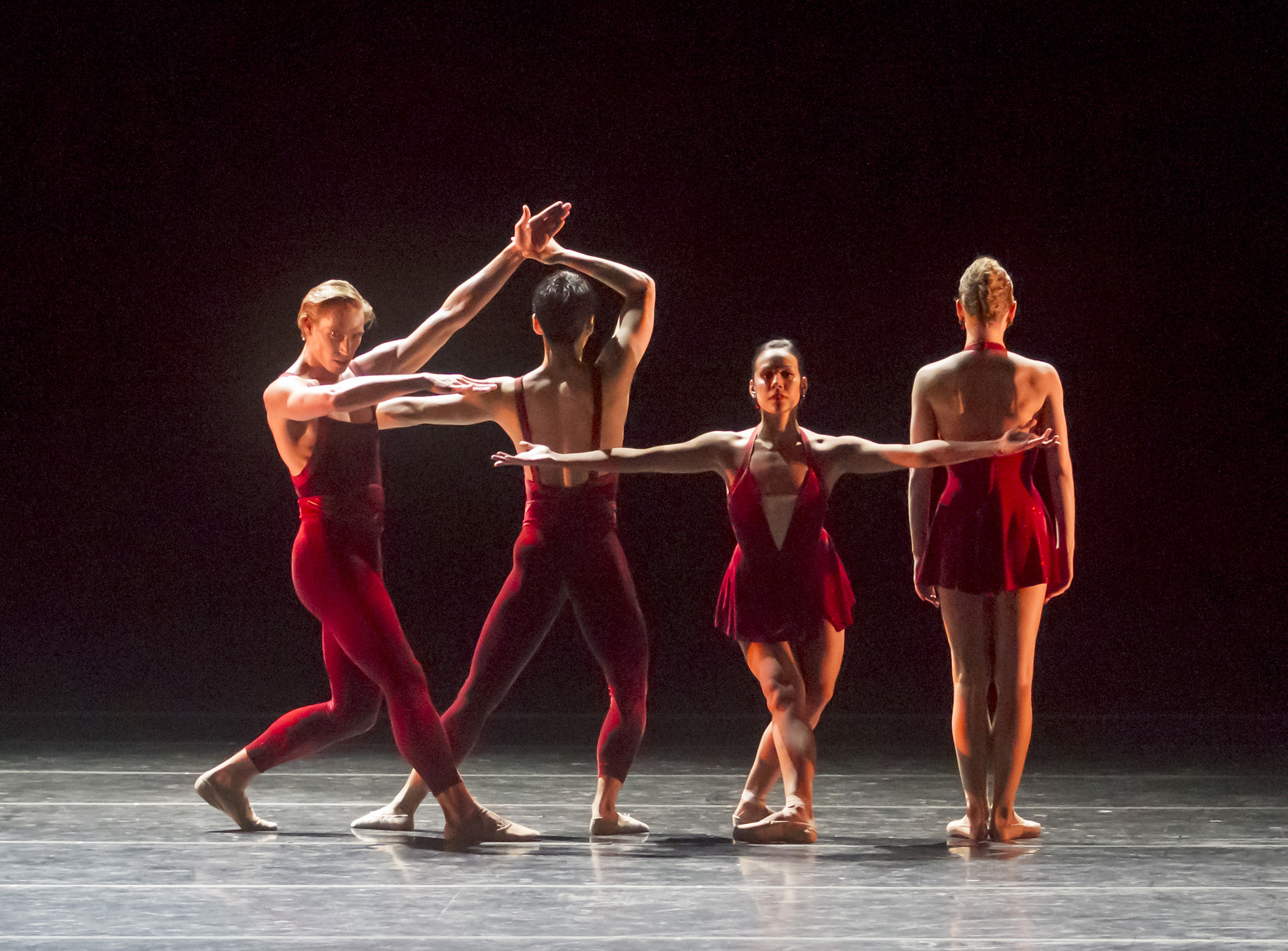 At first glance, Jorma Elo's strenuous, hyperkinetic Glow-Stop would appear to be a rejection of all things Merce, with its lush score -- a marriage of Mozart and Philip Glass, the latter at his most romantic -- and accumulation of tics and gestures on top of classical ballet steps executed at a pace that makes the speediest Balanchine work look like a leisurely stroll. Originally created for American Ballet Theatre in 2006, this piece appears tailor-made for Ballet San Jose: you could not ask for a sharper, more electrifying performance. 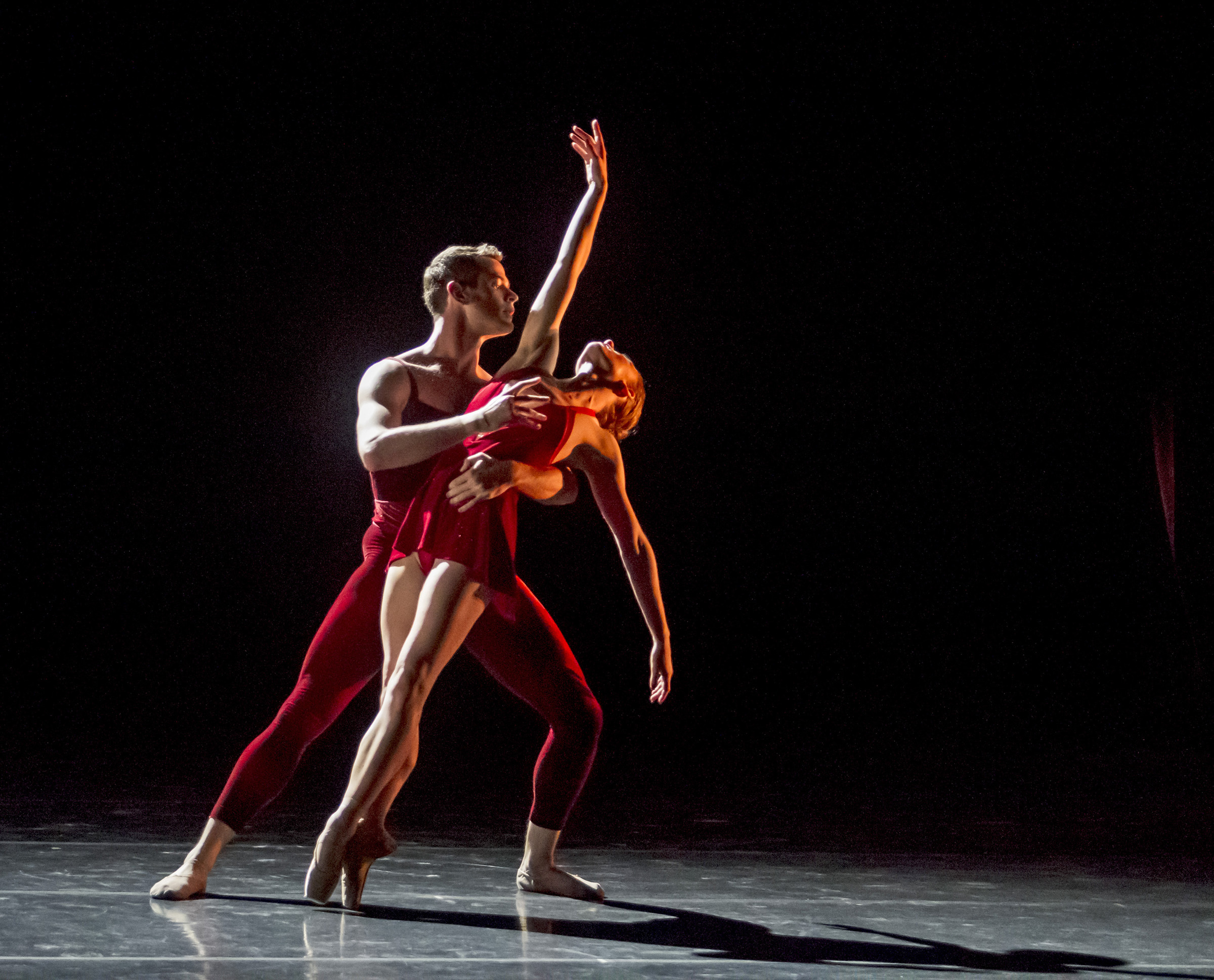 The most interesting elements of Glow-Stop may be the rapid-fire deployment of the arms and the emphatic use of the hands and fingers. The dancers touch various body parts in rapid succession, in a semaphore that reminds us that ballet is very much an OCD art form. By exaggerating the use of the arms and hands, by cramming more steps, more changes in body facing and other stylistic elements into a musical phrase, Elo emphasizes the rules-based nature of ballet and, as Cunningham does in Duets, asks how far we can push the rules without breaking them. Unlike his contemporaries, William Forsythe and Wayne McGregor, Elo appears to have more reverence for classical shapes, for dancers' bodies as human bodies; he's not trying to shock us by distorting the body or creating images of pain and isolation. The exceptional lighting design by Brad Fields and the vibrant, deep red velvet costumes lend a warm glow to the dancers' skin, of a piece with the exhilaration in their faces. 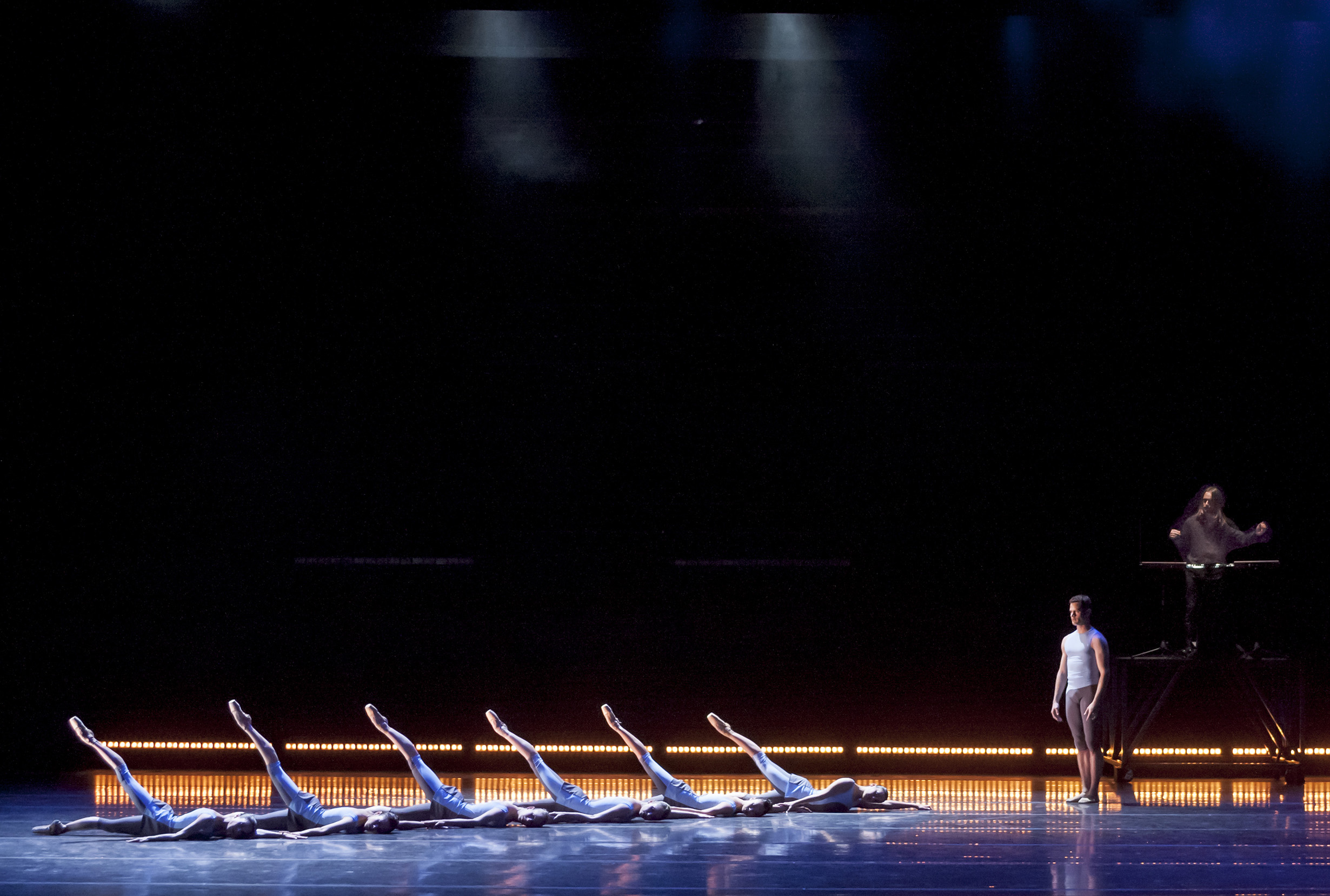 Jessica Lang, on the other hand, uses lighting to create a more stark and ominous landscape. In a bow to Cunningham, Lang set her new world premiere for Ballet San Jose, Eighty One, in silence. Composer-musician Jakub Ciupiński, positioned on a platform above the dancers, with his double theremins and computer, recreates the score from scratch for each performance as he watches the dancers. The electronic theremins sense the position of the player's hands so that no contact is needed to generate sound; foot switches are used to change instrumental sounds, and samples can be looped and overlaid to create a variety of effects. The movement of Ciupiński's hands and feet as he invents the music and the natural swaying of his body make him look as if he is "conducting" the dancers; his movements are among the most compelling onstage. 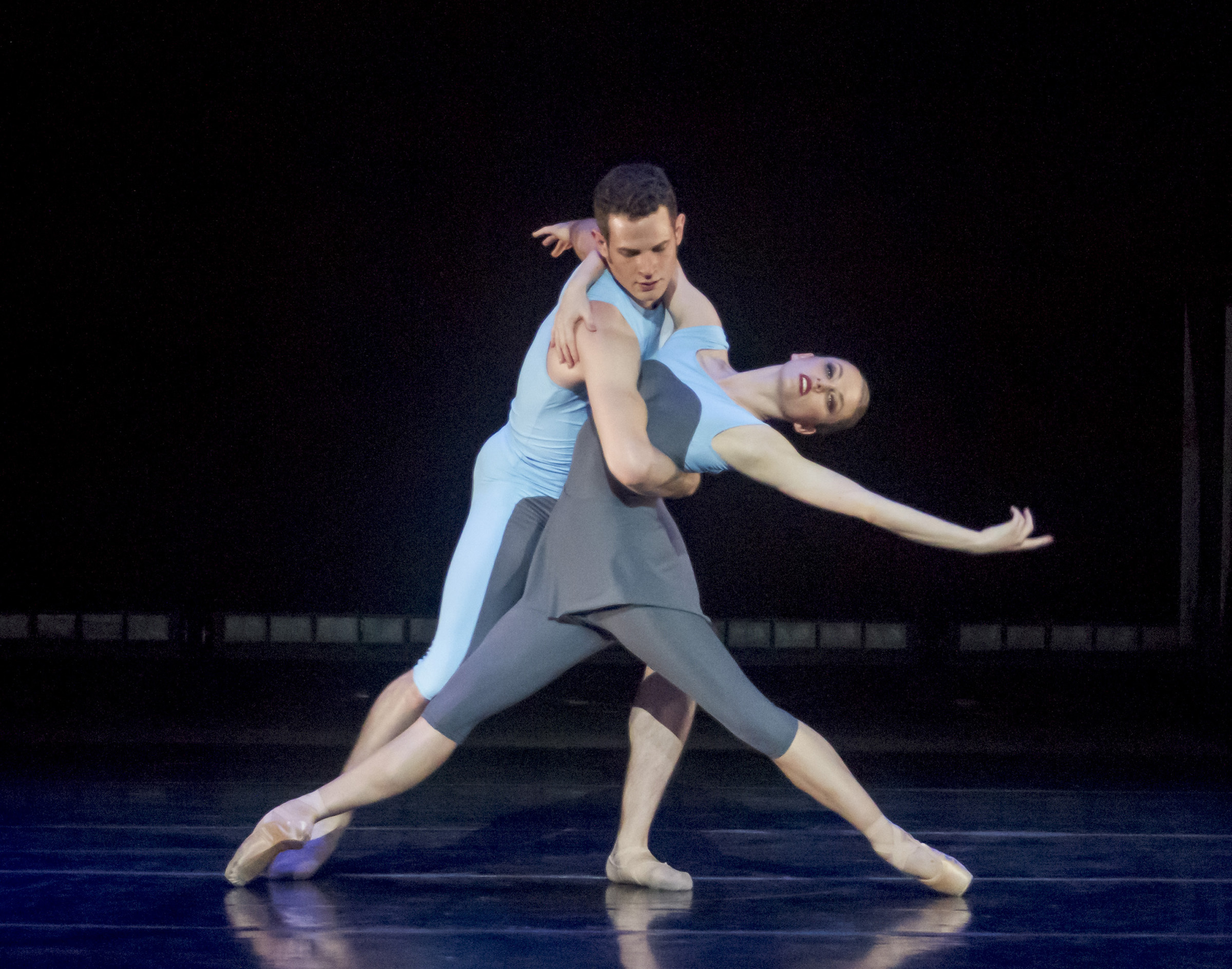 The piece opens with thin, sculptural shafts of light beaming straight down from the rafters, the female dancers in shadow except for legs and arms which they periodically extend into the light. The sensational lighting design is by Jim French. The columns widen into cones and we gradually see more of the dancers' bodies as they step into the harsh white light, later to be joined by their partners. Nutnaree Pipit-Suksun is initially the only dancer who is bathed in a warmer light, and while all the dancers possess strong technique, she stands out for the exceptional lyrical quality of her movement. The opening and the close of the piece were particularly riveting, while the middle section felt rather conventional and less inspired, many of the movements resembling body conditioning exercises, which failed to evoke the kind of emotion that flooded out from Duets and Glow-Stop. 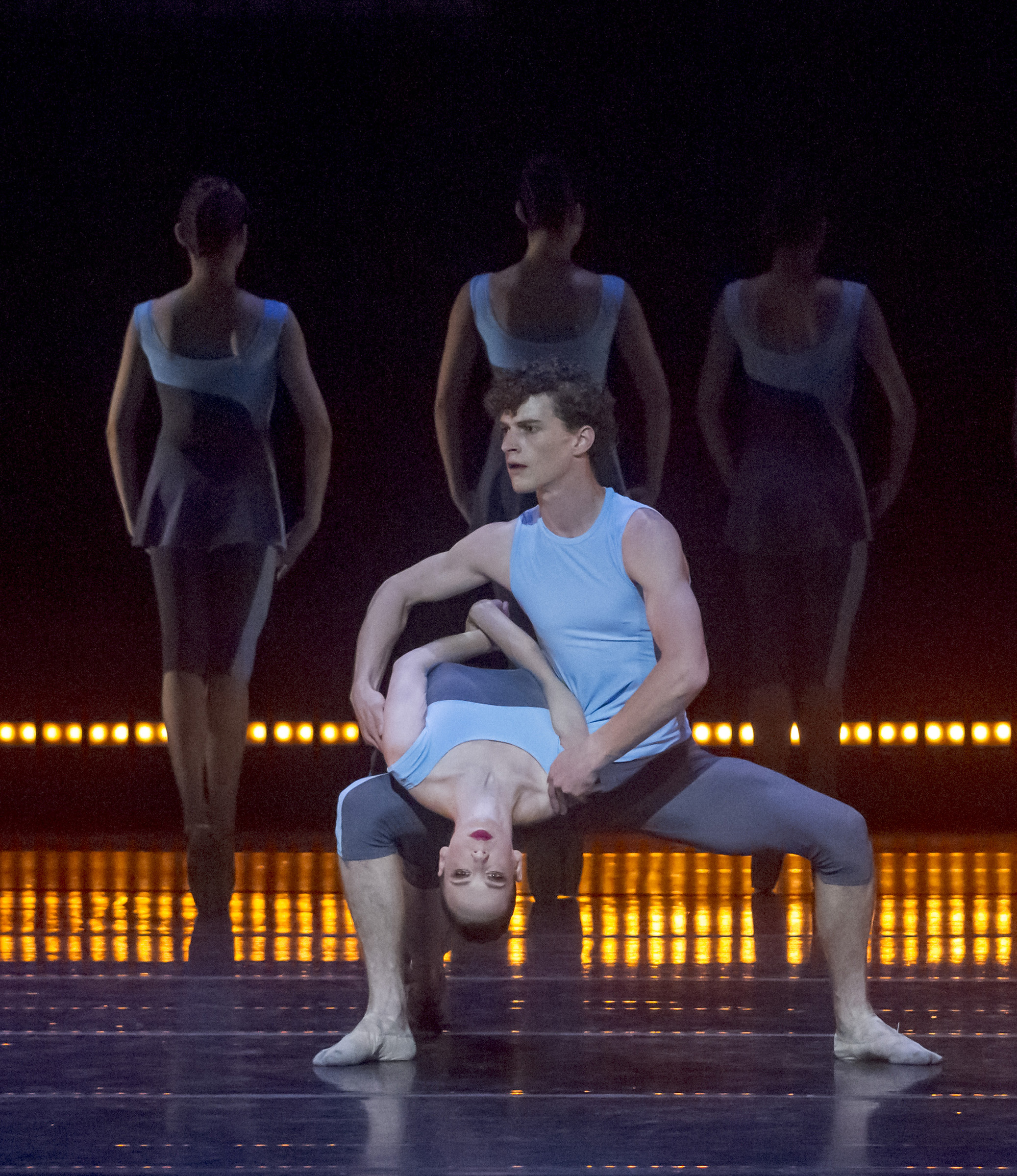 Sandwiched between Duets and Glow-Stop was a tribute to retiring principal ballerina Karen Gabay, a gypsy pas de deux set to Ravel's fiendish "Tzigane." Danced by Gabay and the flamboyant, dashing Maykel Solas, Amour Gitan is light on choreographic invention but showcases Gabay's dramatic temperament, Solas' wicked turning jumps and the virtuosity of violinist Lev Polyakin and pianist Kaisuke Nakagoshi. Ballet To The People was disturbed, however, by the image of Solas grabbing Gabay by the hair and shoving her around, while she acted like she was enjoying it -- an unwelcome throwback to a less enlightened era and a jarring contrast to the world of egalitarian partnering opened up by the pioneering Merce Cunningham.