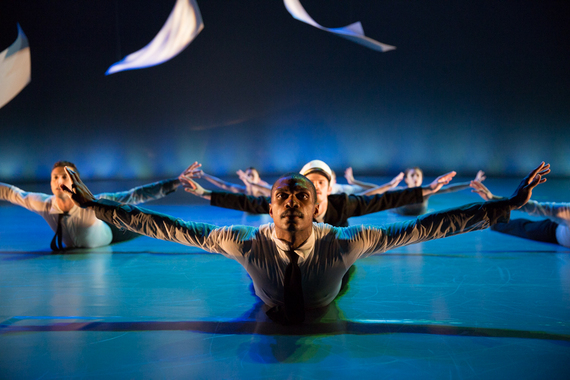 When you miss someone, logic fades to make room for a uniquely visceral feeling. Your stomach churns and aches like it's been exposed to a lit match, and as you close your eyes, you try to imagine them here -- right here -- their flesh and bone tangible.

It is this daydreaming urgency that BalletX captures with Sunset, o639 Hours. The narrative itself feels random, picked on a whim. But it is the subtext that allows for such raw power -- many of us have chased adventure, only to find ourselves pining to fall into the arms of a person thousands of miles away.

Philadelphian company BalletX has brought Sunset, o639 Hours to the Joyce Theater for Ballet Festival, a two-week series of performances by up-and-coming choreographers and collectives in the dance world. Based on the story of the first airmail service between the United States and New Zealand, the action follows Captain Edwin Musick and his crew as they travel to the Pacific between the end of 1937 and the dawn of 1938. Before their plane tragically explodes on January 11, they deliver and retrieve letters filled with the nostalgic rhetoric of those frantic to contact their loved ones across the globe. Therefore, the piece is as much a testament to human connection and vulnerability as a eulogy to Musick's bravery. 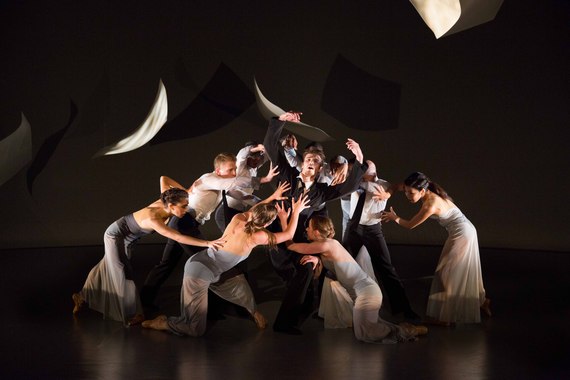 Rosie Langabeer's score, laced with jazzy tunes and Hawaiian beats as well as the hums of wildlife and roars of engines, is a 21st-century spin on music. Monologues fit in without a hitch, and while Langabeer plays with many a melodic genre, she transitions seamlessly to evoke changing environments as Musick continues on his journey from New Zealand, to Samoa, to Honolulu. During the show, she and a band of musicians give her compositions joy and pizzazz, and brass instruments roar with the kind of immediacy you rarely hear at the Joyce, where recordings prevail. While the dancers take the spotlight, Langabeer and her crew are nearly always onstage, whether to create a club-like mood for New Year's Eve or to foster an easy, ukulele-strumming ambiance at the beach.

Then, there is BalletX Co-Founder Matthew Neenan's choreography. Very occasionally, the work drags, especially in its more light-hearted, high-energy content in Honolulu, when the allusions to hula grow tiresome. But most of the time, Neenan has the untamed potential and vision to make a mark on his field.

Tucked inside Sunset, o639 Hours are countless moments of intimacy and ingenuity. For example, when Andrea Yorita moves to "Letter from Francis Elizabeth in San Francisco to William in Auckland," she's discreet, with all the weight and earnestness of someone who longs for her lover, but is afraid to tell him. When Daniel Mayo and Chloe Felesina duet, she drunkenly drops into his caress, abandoning self-possession for emotion. When Zachary Kapeluck holds Felesina to his chest as Musick and his wife, stuck in a reverie as he prepares for his last flight, the pain at separation is palpable. 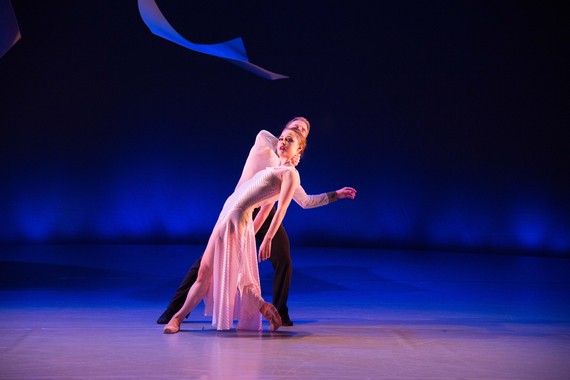 In an especially gut-wrenching scene, Mayo performs to "Letter from George in Honolulu to Shirley in New Zealand." He explains how he needed a break (assumedly from her), and how he doesn't know when he'll return home. He's not quite sure why he didn't take the ship from a few days before, but something's holding him back. For only a moment, Francesca Forcella reacts as Shirley reading the letter, her limbs shaking with brokenhearted desperation.

But the most horrifying, intoxicating image comes at the conclusion. Before the ballet begins, Felesina stands on the Joyce's balcony, her hair streaming. She holds a letter and stares into the distance, eyes glowing with pain that could last for centuries. Only just before the curtain closes is her drama imbued with purpose: she embodies Musick's wife, who has received news of his crash. In sleep, she dances with the dead, trying to catch her husband's ghost and demand its return to the living. Still, as she wakes, she finds herself alone, reaching forward for his embrace that never comes. She misses him -- aches for him -- and no letter can soothe her sadness.