As Yogi might say, "It's "déjà vu all over again." It seems there may be a problem with mailing in absentee ballots in Miami-Dade, Florida.

The problem is not with the ballot itself, but the mailing in process. The envelopes are confusing. It looks like they may not require postage, there is a printed insignia "Official Election Mail --- authorized by the US Post Office." But apparently, this is not a post-free envelope, but in fact requires two first class stamps totaling eighty-four cents. And the instruction booklet that comes with the ballot unhelpfully reads "Be sure there is sufficient postage if multiple pages or if mailed from outside the United States." But nowhere is it clearly stated that postage is needed to mail the envelope within the United States nor is any amount given. When I asked a Board of Elections helper (reached by phone) about this, she sighed and told me they were getting a lot of confused phone calls about the postage issue --- free or not free? And when I asked her what happens to ballots mailed without postage --- "I don't know" was the chilling reply.

Do other absentee ballots around the country share a similar problem with the mailing process? I don't know, but in Miami, Dade, it's a problem and one the Obama campaign is aware of. 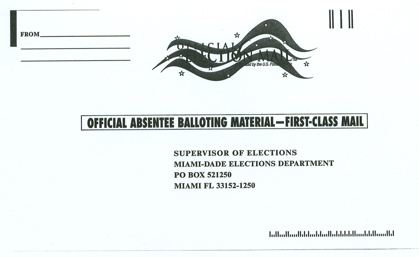 This is not a minor issue, in a state where 500 votes determined the election in 2000, and where elderly voters in Miami-Dade favor Obama in significant numbers. I was helping my elderly mom fill out the ballot when I discovered the problem. A life-long Democrat, she was celebrating her 93rd Birthday on the day we filled out the ballot and reminisced "I can still remember the thrill we had when Franklin D. Roosevelt, my idol, declared a bank holiday and made a speech that gave us hope!" My Jewish mother had no doubts that this was the time again when we needed similar leadership and she emphatically marked her ballot next to the "Obama-Biden" spot (second from the top).