When the strange object at the bottom of the Baltic Sea was first spotted, some thought it might be a UFO that crashed into the waters between Sweden and Finland, and at the very least, it bore a striking resemblance to the "Star Wars" Millennium Falcon.

Hardly any media outlets are still calling it a UFO -- and that's a relief, since there's never been any evidence of any kind that this thing was ever an unidentified flying object.

But there's a lingering wrinkle in the origin of this mushroom-shaped anomaly: Could it have been part of a Nazi secret anti-submarine device?

According to Pravda, the Russian newspaper, a retired Swedish submarine officer, Anders Autellus, previously speculated that the undersea object may have been the base of a structure used during World War II to block Russian and British submarine signals.

Autellus told the Swedish newspaper, Expressen, that huge concrete structures were built as traps by Germany to make it difficult for Soviet submarines to navigate in the Gulf of Finland during the war. These large steel wire mesh constructions were reportedly meant to cause signal and radar problems in submarines.

Even as recently as the June expedition to the bottom of the Baltic Sea, divers reported equipment malfunctions when they approached the anomaly, but a concrete reason for it hasn't been determined.

So, no one is saying definitively that the object was, in fact, Nazi-related or more simply, a glacial deposit just sitting on the sea floor. 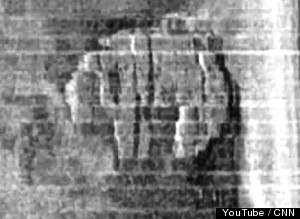 This entire Baltic Sea drama started back in June 2011 when Peter Lindberg, captain of the Ocean Explorer, and his co-researcher Dennis Asberg, using side-scan sonar -- see image at right -- found something unusual 300 feet below the surface of the water.

At first, the reportedly 200-foot-wide circular object made headlines because it looked like the fictitious Millennium Falcon spacecraft from "Star Wars."

Lindberg and Asberg returned to the submerged site this past June to take a closer look at the object that had caused a viral stir, which speculated the anomaly could be anything from sonar glitches, a sunken Russian ship, stone outcroppings, or an alien spaceship.

Pictures and videos were taken of the object, with the eyewitnesses claiming it looked like a giant mushroom, and samples of it supposedly brought to the surface for analysis.

Here's a trailer for an upcoming documentary about the Baltic Sea anomaly.

Some of the material was given to Volker Bruchert, an associate professor of geology at Stockholm University, reports Life's Little Mysteries.com.

"My hypothesis is that this object, this structure was formed during the Ice Age many thousands of years ago," Bruchert said.

And yet, Lindberg and Asberg have also claimed that the only samples they've given for analysis were not from the anomaly itself, but were items from the "vicinity" of the object," writes Open Minds.tv.

Lending yet another mysterious aspect to this whole thing is a description of the Baltic Sea anomaly given by Lindberg during a recent radio interview, where he said, "It has these very strange stair formations, and if it's constructed, it must [have been] constructed tens of thousands of years ago before the Ice Age."

So, where does all of this leave the jumbled, confusing un-focused adventure of the Baltic Sea anomaly?

Nobody seems to want to fund any further investigations of Lindberg's discovery, says Life's Little Mysteries.

And Lindberg is soliciting people to help support his research by purchasing apparel from his Ocean X website.

Check out the Baltic Sea anomaly and other strange items here.