Provocateurs flocked to the scene, hoping to provoke a bloody confrontation. Armed protestors descended on the government office, claiming injustice and demanding accountability for the government's actions. Having already received innumerous death threats via telephone, government leaders elected to close the office to protect the safety of employees and visitors alike. Their ability to maintain the rule of law hung in doubt.

Does this sound like a scene from the recent riots in Baltimore to you? If that's what you're thinking, you're mistaken. 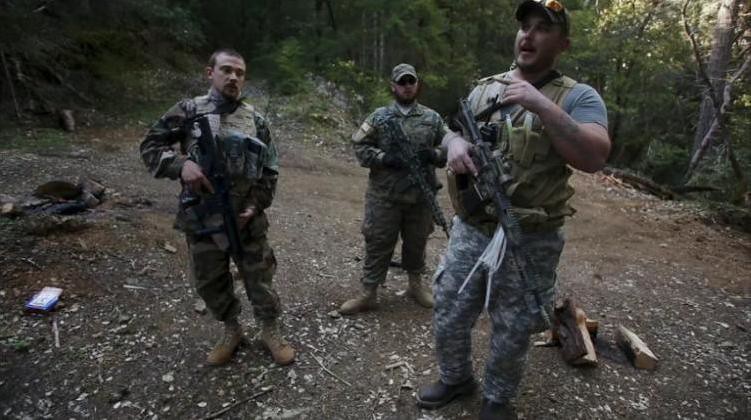 The events described above actually took place 2,800 miles away last week in Grants Pass, Oregon, where a band of gun-toting insurrectionists have gathered in response to a dispute between local miners and the Bureau of Land Management (BLM). The co-owners of the Sugar Pine mine, Rick Barclay and George Backes, claim to have surface rights to the plot of land, in addition to mining rights (which are not in dispute). BLM notes that the surface rights to the land were ceded to them by previous owners in 1961 and states, "[Barclay and Backes] had ...begun putting up a house on public land; and had failed to file appropriate mining plans with the BLM."

Barclay and Backes, fearing a "land grab" by BLM, then put out a call to the Oath Keepers, a radical anti-government group, and asked them to provide "security" at the site. The initial response was from the Oath Keepers chapter in Josephine County. Since then, heavily-armed anti-government radicals from across the country have flocked to the mine, including the Idaho III Percenters, Central Oregon Constitutional Guard, Michigan Militia and members of the family of Cliven Bundy, the Nevada rancher whose armed standoff with BLM made national headlines last year. The private consortium that owns the mine has published a statement declaring that this is "a once-in-a-generation prime opportunity to strike at the heart of the very surface management authority of the DOI and USDA." 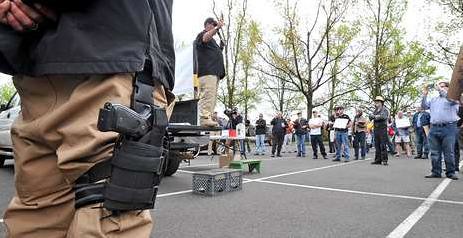 The situation has gotten out of control quickly. Barclay himself described it as a "circus" and pleaded with his volunteers to "stop calling the BLM and threatening their personnel." When it was announced that armed protesters would gather at BLM offices in Oregon on April 23, the agency closed its offices in Grants Pass and Medford, stating, "The safety of our employees and the public continues to be our top priority." In an incredible act of courage, 12 Josephine County residents calling themselves Together for Josephine conducted a press conference at the county courthouse the very next day where member Jerry Reed said the following:

I'm deeply concerned that our community is being used as an opportunity by an outside paramilitary organization to exploit a local, legal dispute to advance its own national, anti-government agenda. We hope that the miners' legal dispute will be resolved without violence, but the presence of these openly gun-toting, anti-government partisans is truly frightening and risky for all of our local citizens, and for our country generally ... The presence of this organization with all of their guns and implied threats is bad for the image of Josephine County, our economy, our local business, our tourist industry ... Please put away your guns and let the legal process, rational discourse, and old-fashioned negotiation determine a nonviolent outcome for the good of all of us who live here and for a better American way to resolve conflicts.

Members of the Oath Keepers showed up at the event to harass and intimidate Together for Josephine. Sadly, Reuters has been one of the few national media outlets to even mention the crisis at Sugar Pine mine.

The rioters in Baltimore weren't middle-aged white men. They weren't armed with semiautomatic battlefield rifles equipped with high-capacity ammunition magazines. They weren't wearing body armor. But unlike the insurrectionists at Sugar Pine mine, they faced a massive response from government that included the deployment of National Guardsmen, over 400 Maryland State Troopers, and nearly 500 law enforcement officers from outside states. More than 200 Baltimore residents have been arrested.

I certainly don't condone the violence we saw in Charm City. Rev. Dr. Martin Luther King, Jr. spoke truth when he said that "violence and hate only breed violence and hate." "Fiery, demagogic oratory in the black ghettos urging [African-Americans] to arm themselves and prepare to engage in violence...can reap nothing but grief," he warned.

That said, the younger protesters who turned to bottles, rocks and fire have every right to be outraged at the brutal treatment of Freddie Gray, and so many other young black men in the city. Despite the media's singular focus, it's also patently clear that the overwhelming majority of residents in Baltimore protested peacefully. This includes the countless residents who turned out to clean up their city and 10,000 who peacefully marched through downtown Baltimore to protest police brutality.

More to the point, though, it's nearly impossible to miss the double standard here when it comes to upholding the rule of law.

We are more than two weeks into the standoff at Sugar Pine mine, and there is not a single national television camera in Grants Pass. Not a single national politician has had any words of criticism for the insurrectionists who have threatened the lives of BLM agents. And the government? The government has retreated quietly into a corner and allowed the Oath Keepers to prevent them from doing the job that American tax payers task them with doing. Not one arrest has been made.

Can you imagine what would happen if angry young men of color spouting insurrectionist rhetoric gathered outside a government building with handguns and assault rifles and prevented officials from doing their job? The government's response would be massive and immediate. Political commentators would clamor for direct action to eradicate these "thugs."

The last time I checked, however, we are all supposed to be equal before the law. That is not happening in today's America. If we are going to use the power of the state to make sure that violent rioters in Baltimore don't have the run of the streets, then there is no legitimate rationale for allowing armed insurrectionists to take over our public lands and threaten government employees with death.