Earlier this week, The Huffington Post reported that Batman had been pulled over -- Batmobile and all -- in Montgomery, Md., for not displaying a proper license plate.

It was discovered that the real plates were inside the car. In their place? The Batman symbol -- naturally.

When videos of this masquerading Batman -- whose real name is Lenny B. Robinson, a businessman from Baltimore County -- first came to light, it seemed that the wealthy gentleman (whose 'Batmobile' is really a black Lamborghini) was simply having a lark.

But now, the Caped Crusader's true intentions have came to the surface. It turns out he's a real hero, after all.

According to the Washington Post, Robinson, 48, has been visiting sick children in hospitals in the Baltimore area since 2001. He dresses up as Batman when he makes his rounds and gives out Batman toys and other goodies to the kids. Sometimes his teenage son, Brandon, tags along as Robin.

Last week, as part of Hope For Henry's annual Superhero Celebrations, Robinson -- alongside Wonder Woman and Spiderman -- was at Georgetown Hospital in Washington, D.C., visiting with children with cancer and other serious illnesses, PR Web reports.

"These visits provide an immediate boost for these kids," Jeffrey Dome, the oncology division chief at Children’s National Medical Center in Northwest Washington, told the Washington Post.. “Some of these children have to stay for weeks or months at a time. That wears down the children and it wears down the family. A visit from a superhero is sort of like a fantasy in the middle of all this hard-core therapy.”

Robinson spends about $25,000 a year of his own money on Batman toys and memorabilia, the UK's Metro reports.

Watch this real-life Batman cruising around in his Batmobile. 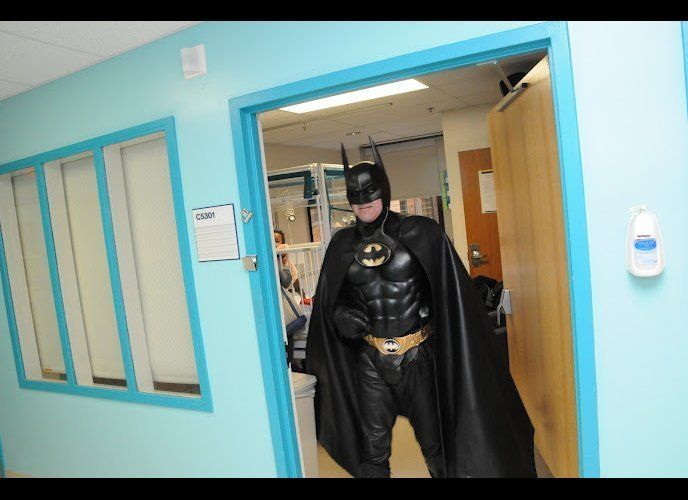