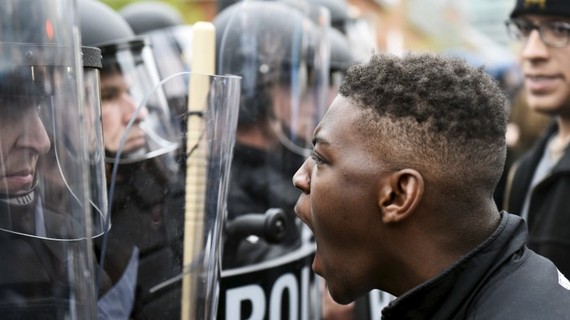 In a speech given at Grosse Pointe High School entitled "The Other America," Martin Luther King Jr. speaks about race, Vietnam, and poverty. The speech was given several years after the Watts, Harlem, and Philadelphia riots.

For King, rioting was not the act of 'savages' or 'thugs.' It is an act by poor, frustrated, and indignant black folks who are victims of oppression and who are also tired of injustice, police brutality, unemployment, and racism. King describes the rioters' actions as a speech act that communicates their frustration and oppressive realities.

Within the last few months, similar riots have occurred in black communities in the United States, first in Ferguson, Missouri and now in Baltimore, Maryland. These riots are not outlier cases. In 2014, citizens in Brussels, Madrid, and Mexico also rioted as a response to injustice. However, these riots are unlike the riots by young white college students in 2011 at Penn State performed because their football coach was fired, Denver in 2014 because their team lost, or Keene, New Hampshire in 2014 because of a broken-up party during a pumpkin festival.

In the cases of Ferguson and now Baltimore, parties or pumpkins do not ignite rioters' disappointments. They are responding to physical death performed by the state on black bodies. It's also a cry against a 'social death' performed by failed economic, educational, and crime polices.

The black rage of rioters is not about getting goodies at a CVS pharmacy. It's built on a lack of people responding to their emergencies. As Lauryn Hill writes,

As a former 10-year resident of Baltimore and as a graduate of Morgan State University in the Northeast section of Baltimore, I've witnessed the poverty and the devaluing of its black residents even while black politicians are governing them.

Sadly, citizens know how the story will end. A grand jury will refuse to indict officers. The Justice Department will inquire to see if Gray's civil rights were violated and create a report suggesting it wasn't. In a few weeks, the media will forget Baltimore. And while this is going on, another black body will die at the hands of the police in another part of the country.

What you want is for people to listen to you. So you take out your cellphones and record the atrocities. Perhaps they will hear you this time. Perhaps they will finally see what's going on in your police state. But then you realize that even when there is a tape, others doubt what you show them, question what they hear and see, and interpret your voice in ways you did not intend. And although you tell them how destructive your world is by showing them your recordings of the beatings of Rodney King and the choking of Eric Garner, they just won't listen.

So its not surprising that King would continue by noting, "as long as justice is postponed we always stand on the verge of these darker nights of social disruption."

Yes, they are rioting in Baltimore. Yes, it is unfortunate. But what's more unfortunate is the problems that lea to the rioting. These social and economic problems are in need of fixing.

Until we take oppressed people's problems seriously, rioting will become the new normal. Until we admit to the hand we have in perpetuating the harsh realities of the poor, this is what we will see. Until we honestly hear the marginalized and their rage, we will continue to hear this rioting tune over and over. Rioters in Baltimore are not only expressing their anger, they are a reminder of our responsibility to the problem and our obligation to fix it.

King starts his speech off by noting, "I'm absolutely convinced that a riot merely intensifies the fears of the white community while relieving the guilt." It is here where I disagree with King. If only we prized black rage and sorrow over white fear, tears, and guilt, our world could be drastically improved.

I have heard many responses by people suggesting that the rioters are making them look bad and this is not their Baltimore. I think that blacks are too concerned with what whites think of them. Instead of being concerned with what whites 'think' of our rage and anger, we need to challenge white folks and the state to start thinking of us during budget proposals, employment initiatives, and to think and know that our lives matter.

While some are policing the rage of Baltimore youth, how about you think about creating programs to lift them up when this rioting is done. Instead of praying for these so-called 'rioters who lack moral character', how about you get off your knees and fight for their survival. If you are not willing to do that, just shut your mouth and let them speak for the moment!

Almost 23 years to the day on April 29, 1992, four white LAPD officers were acquitted of beating Rodney King. Riots ensued in South Central. Rodney King is famously noted for his plea for the rioting to end by stating, "Can't we all just get along?"

In 2015, Baltimore rioters want more than to 'get along.' They want to 'get ahead' and 'get justice.' They have given us their demands. Regardless of your fears or your disappointment, maybe you need to just sit down and listen!