Protests erupted in Baltimore this week following the fatal arrest of 25-year-old Freddie Gray, who died on April 19 after sustaining a severe spinal cord injury while in police custody.

The city is deeply segregated, and areas with high percentages of black residents also generally have high unemployment rates. Almost 20 percent of Baltimore families live below the poverty level, and the median family income is $41,385.

Here are a few maps that show how divided the city of Baltimore is today:
White flight, stunted economic growth and high crime have all been issues in Baltimore over the last 60 years. Sandtown-Winchester, Freddie Gray's neighborhood, has an unemployment rate of 1 in 5, about double the city average, according to a Baltimore City Health Department report cited by Slate. 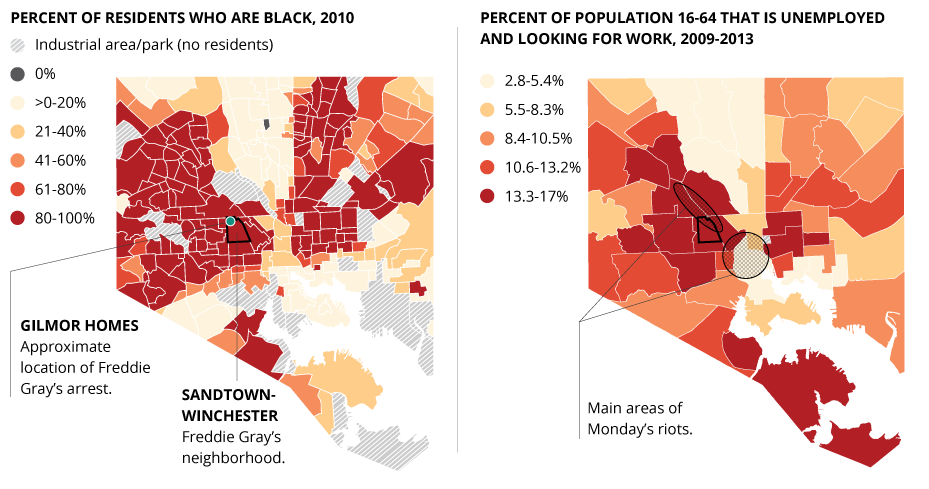 In areas of the city with higher percentages of black residents, hundreds of lots are empty and buildings are standing vacant. Violence broke out in areas with some of the highest rates of empty lots and buildings.
Though the city has promised to take a more proactive approach to addressing abandoned and vacant homes, hundreds are still unoccupied. In Gray’s neighborhood, 34 percent of residential properties are vacant or abandoned, according to the Baltimore Neighborhood Indicators Alliance.

Source: City of Baltimore
Officer-involved shootings and arrests are also concentrated in areas with more black residents. In Sandtown-Winchester, at least 180 arrests have occurred so far this year. More than 130 were for alleged drug offenses.
Police brutality is a major issue in the city. Baltimore paid $5.7 million in court settlements to victims of police brutality between 2011 and 2014,
the Baltimore Sun found
. "Years of abuses are every bit as egregious as what the Department of Justice documented in Ferguson, Missouri, and as deserving of a national response," Conor Friedersdorf
wrote in the Atlantic
.

Source: City of Baltimore
Download
Calling all HuffPost superfans!
Sign up for membership to become a founding member and help shape HuffPost's next chapter
Join HuffPost