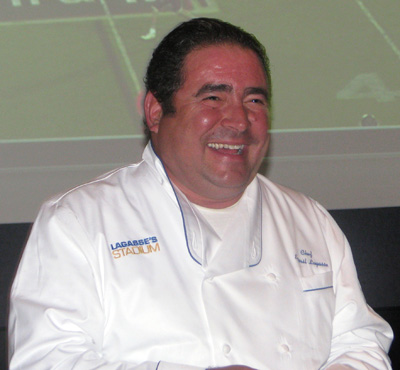 Note: I don't work for the Palazzo and only tend to go there either to see a show or take visitors to the shops. I am not a regular at all. But what I describe below is very impressive.

In case you didn't recognize him, that very happy man aboveleft is Emeril Lagasse. The photo was taken last Friday when he hosted the grand opening of Lagasse's Stadium at the Palazzo Las Vegas.

Lagasse's Stadium is not a place to play games. Rather, it is a place where one can find a form of gaming. Specifically, it is a Sports Book. With lots of amenities.

I didn't know what a sports book was until I moved here. I knew what Off-Track Betting (OTB) is because in New York that is common and -- being my father's daughter -- I do like the ponies at Triple Crown time. But a Sports Book? No idea.

So, what I've learned is that a Sports Book is a feature of just about every casino in town. (Haven't been in all of them, so I cannot be any more definitive.) It is where anyone wishing to bet on any sport and for which a person can place a bet can go and bet. The people who staff them are usually quite willing to explain such arcane concepts as the "point spread" to people who -- as I was -- are clueless.

The Sports Book is usually comfortable -- tables, chairs, a nearby conveniently located bar and lots of TV screens and big LCD scoreboards. You find people carrying odds sheets, newspapers and other publications dealing with sports.

It is because of the Sports Books here that Super Bowl weekend is the busiest one of the year.

Now, the sports book is not unique to Las Vegas. They have them in other places. But, remember, this is Las Vegas so, of course, the most spectacular sports book anywhere is here and it's Lagasse's Stadium.

The 24,000 square-foot space -- very wisely -- has features that will please both bettor and non-bettor. There are 105 hi-def TVs, including two custom-built 103-inch plasma screens and a 9 x 16 video wall. So, while players can bet, they can also find white-tablecloth service and the best of Emeril Lagasse's food.

To celebrate the opening, celebrities from the worlds of both sports and entertainment walked the "Green Carpet." Among them were Entourage actors Jeremy Piven and Kevin Dillon, Warren Sapp, formerly of the Oakland Raiders, Olympic Gold-medalist Bruce Jenner, race car driver Danica Patrick.

The philosophy there seems to be the same that led to the creation of lounge entertainment 50+ years ago. At that time, most gamblers were men (probably still are) and the wives would get bored waiting around for them and would coax them away from the tables. But, with lounge acts playing practically all night, the wives had something to do and weren't bored. Thus, husbands could spend the night at the tables.

In his sports book, Lagasse offers the same thing. There are poker machines, a nifty computerized blackjack game and lots to eat -- from very casual to full gourmet meals.There's also, overlooking The Strip and the pirate show at Treasure Island just across the street, plenty to watch.

It is very smart planning.

Lagasse, a Boston native who is a self-confessed "sports junkie" got the festivities going with a hearty "BAM!" Two days later I happened to be near there and took a peek. The line was out the door. Looks like the Palazzo bet on a winner.