If the United States and other nations do not fully ban the sale of ivory, African elephants could be extinct -- poof -- in as few as five years.

Today, on average, one elephant is killed every fifteen minutes.

"The animal which surpasses all others in wit and mind," as Aristotle once called the grandest of land animals, is being hunted for its tusks so quickly that most large herds will be gone as soon as 2020, experts warn. 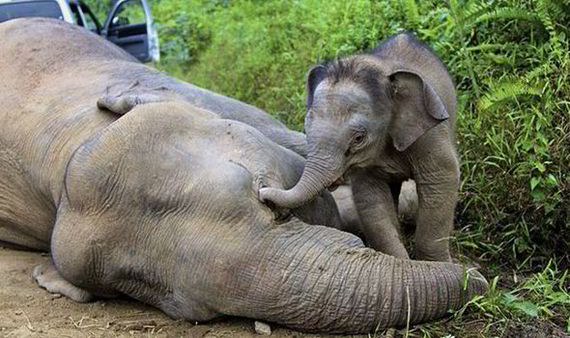 The window to save the African elephant from extinction is closing fast. Today only about 400,000 elephants roam Africa's savannah and forests, down from 1.3 million in 1979, and their numbers are dropping rapidly. A shocking 100,000 elephants in Africa were killed for their ivory between 2010 and 2012, according to the most comprehensive survey of elephant poaching to date. Rhinos, killed for their horns, also face gruesome deaths and poor odds.

This death toll -- and the virtual extinction of one of earth's most exquisitely intelligent and altruistic species that it foreshadows -- is heartbreaking. It is especially sickening because it may be avoidable -- if the United States and other nations act swiftly to end the global trade that is driving elephants' and rhinos' massacre.

The solution is simple: to save elephants from extinction, the ivory and rhino horn trade in the U.S. and throughout the world must end immediately.

There are three main ways to end consumer demand for ivory, Elizabeth Bennett writes in the journal Conservation Biology. First, establish a controlled legal trade in ivory with no leakage of illegal ivory into legal markets. This is not realistic today because there is rampant corruption throughout the commodity chain by government officials in charge of enforcing wildlife laws. As Bennett points out, of the 12 countries in Africa with 15,000 or more elephants, eight fall in the bottom 40 percent of the world's most corrupt countries, as ranked by Transparency International in 2013.

Second only to China, the U.S. is the largest market for ivory goods. Illegal ivory regularly seeps into the U.S. market. A report by the National Resource Defense Council released this month found that the proportion of illegal ivory for sale in California markets and stores has doubled over the past eight years. Effectively addressing corruption in order to create a robustly regulated global trade network will take several decades to achieve, if it can be achieved at all. The African elephants don't have several decades. They may not even have one.

The second way to reduce consumer demand is to get the public to associate ivory with shame instead of status. But public awareness campaigns, while admirable, are insufficient. Despite the advocacy of basketball star Yao Ming and other celebrities, the illegal ivory trade is exploding in China, with the wholesale price of raw elephant tusks tripling in the last four years due to skyrocketing demand.

So that leaves one final hope: ban all sales of ivory. End the ivory trade -- all of it, including antique pieces and tusks that were created when trade was legal. Ban it unequivocally, permanently and immediately -- and start here in the United States. Let 2015 be the year that legislative bodies across the U.S. and the world declare that no piano key or domino is more valuable to us than the fate of the world's great creatures.

In the coming year, every other state should follow their example.

The U.S. State Department should also get tough with China's leaders (several of whom, including Chinese President Xi Jinxing, have allegedly gone on ivory buying sprees of their own).

The number of licensed ivory factories and retail outlets in China has quadrupled in the last 10 years.

"How shockingly destructive and historically shameful it would be," Secretary of State John Kerry said in 2012, "if we did nothing while a great species was criminally slaughtered into extinction. And yet, here we are in the midst of one of the most tragic and outrageous assaults on our shared inheritance that I've seen in my lifetime--where an elephant's dead ivory is prized over its living condition, where corruption feeds on its body and soul, and where money only makes matters worse."

Tell China that. Kerry needs to make it abundantly clear to Chinese officials that they are carving much more than just tusks and horns by consuming ivory. They are carving their legacy.

It's time for a much tougher stance toward China regarding their ivory trade - one with teeth (of the non-elephant variety) - that demands change, includes ways to measure outcomes, and includes serious punishments and sanctions if the ivory trade continues.

Finally, the U.S. must stop issuing permits for American hunters to kill elephants and rhinos for sport. The wealthy Americans who "pay-to-slay" elephants in Africa should be publicly shamed.

"If American trophy hunters were sincere [in wanting to help elephants], they could invest their wealth directly to fight illegal killing," wrote Wayne Pacelle, CEO of The Humane Society of the United States. With an average of 96 African elephants killed everyday, goodness knows that increased financial support by Americans with money to burn for anti-poaching work on the ground would be welcome.

If we do not demand action from our leaders to help save the elephants, and if our legislators don't act boldly, five years from now there may be no elephants left to save.

The "forlorn, sentimental cause" of saving the elephants "is the cause of humanity, in the story of life that is bigger than humanity, and right now the fight is not going our way," Matthew Scully wrote in a moving essay for The Atlantic.

Imagine being asked by a child in less than a decade: "Why did all the elephants have to die? Why didn't people save them?"

We can save them if we act now, but there is no time to waste.