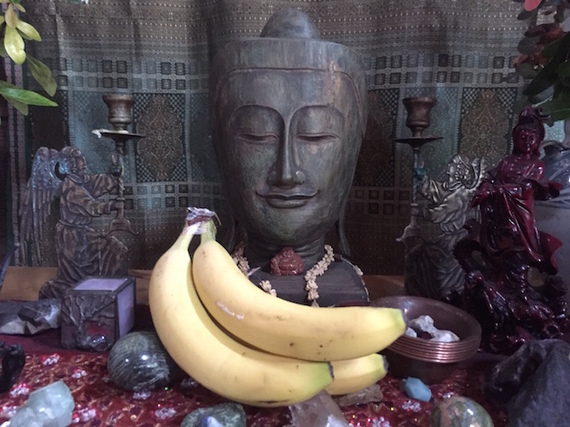 (I spent the winter of 2012 in silence on a self-guided retreat at the Forest Refuge, a Buddhist meditation center in rural Massachusetts. This twice-monthly blog explores daily life in the silence, and how intensive retreats offer a compass for everyday life).

My first silent retreat was at Spirit Rock Meditation Center in Woodacre, California. The food at Spirit Rock, even at breakfast, was ample and delicious: hot and cold cereals, hard-boiled eggs, breads, assorted jams and spreads, and, at the far end of the table where the food was laid out, a big bowl of fruit.

The fruit bowl itself offered a generous selection. Except for bananas. These were always in limited supply, and went fast.

One morning towards the end of the retreat I waited patiently on the breakfast line, inching toward the food table. When I got near enough to look, I started eyeing the bowl of fruit. Hmm, just a few bananas left. I began a complex mental calculation: the number of people in front of me, the number of bananas, the odds I'd get one. It was close. Soon the bowl was down to one banana, but I was almost there so it looked pretty good. But then the guy on line right in front of me took the last banana.

And I immediately thought: Dammit! He took my banana!

Not a banana. Not the last banana. My banana.

That was ten years and a dozen silent retreats ago. I've had a lot of time to ponder: How and when did that banana become mine?

As I now understand it, my claim of proprietary banana-ship started even before I saw the fruit bowl. Wanting a banana - simple desire itself - was itself enough to set the wheel of "mine" in motion. When vision, with its long, graspy reach, got added to the mix, the gears accelerated. Then came the clincher: seeing how few were left.

Had I reached the table and not seen any bananas, this would have not have rankled (at least that morning). Had I seen bananas but not wanted one, I would not have cared. Had there been plenty of bananas, I would not have rushed to stake a claim, allowing myself instead the false beneficence that comes with the perception of bounty.

Here's what happens with resources we desire and consider scarce: an automatic, fierce impulse towards ownership kicks in, most often with urgency far disproportionate to the actual circumstances. Resources we tend to perceive -- or misperceive -- as bottomless come with an entirely different, but no less perilous, set of traps (just ask the planet).

The sense of "mine" extends well beyond the borders of our physical bodies. The claim of "self" pushes beyond the limits of our senses. "It's my..." reaches out into the furthest stretches, and down into the tiniest crannies, of mental life. A wisp of thought, leavened with desire or aversion, is enough for us to begin the assertion of proprietorship.

That there is no "self" in the way we habitually experience it is a fundamental, provocative principle of Buddhism and other eastern philosophies. It's a thrilling idea, supported not only by New Agey seekers but also hard-core neuroscientists, who thus far have been stymied in their attempts to map its elusive, probably non-existent turf in the brain. But to move beyond the idea of non-self and into the actual experience of it? There's the metaphysical rub.

Nothing in our inner life is more counterintuitive. After years of meditation practice I can now often watch thoughts and emotions arise and subside, and know them as impersonal, energetic habits -- a paradigm-shifting insight when this occurs. Still, it is hard not to describe "my" mind as the location of these experiences, or to move beyond the notion of a "me" as the one who observes this emptiness. Me, mine, my, I -- these may be unavoidable shortcuts to describe what occurs within the innermost spheres of human experience.

None of this means that in the everyday world there is no separation between you and me, or that we have no personal internal history, no private subjective experience. But it does suggest that there isn't a fixed, clearly-delineated "I" in the way we habitually, unquestioningly assume it.

Try to pin down this "I," to catch or border it, and it disappears like mist or a rainbow. You might as well measure the substance of a cloud, or map the edge of a fog. From a distance these phenomena seem clear. The closer you get, the more they vanish.

That's why there are entire schools of meditation rooted in just one question, enough to occupy a lifetime, and enough to awaken: Who is it that meditates?

Touching the truth of this enigma, not as an abstract idea but as verifiable experience, is one of the deepest aspirations of serious meditators. Once the "self" disappears as a reliable phenomenon and comes to light as a deeply ingrained habit, many other Buddhist teachings make sense in a way that transcends intellectual concepts. Non-self shifts the ground of practice, both on and off the cushion. It is, ultimately, the linchpin of Buddhist meditation. The key to awakening.

But none of this was on my mind that morning eating breakfast at Spirit Rock, after the guy in front of me thoughtlessly snarfed the last banana. What I would have done, I ruminated over my banana-less oatmeal, is cut the banana in two, take half, and leave half for someone else. That would have been the decent thing.

Oops -- I have to admit: the option of leaving the whole banana for someone else, foregoing my wanting it completely, honestly didn't cross my mind for a long, long time. It was only when it did that I recognized the sham, pseudo-Solomonic generosity of my aggrieved banana-less rationalization; what I in fact imagined was the guy who took the last banana -- him cutting it in two, and leaving half for me.