The image we hold of veterans of Iraq and Afghanistan--the image conveyed by media--is of young people who've been traumatized, physically and mentally, who're struggling with the VA, struggling with their families, struggling to find work, and are committing suicide at the rate of three every single day.

But there's another reality, which Joe Klein, best-selling author of Primary Colors, presents in his game-changing book, Charlie Mike, which is military speak for "Continue the mission." He asserts that this generation of vets is a huge, untapped resource for aiding and improving our country

He tells the stories of men and women who want to continue serving, to find the purpose and comradeship they felt in war.

What makes them different from the Vietnam veterans--who were drafted in large numbers--is that "this generation volunteered for the military," Klein said in an interview. Along with explosions and horrendous casualties, they experienced "the exhilaration of doing tough work and the spiritual bond of serving with a tight community of friends." 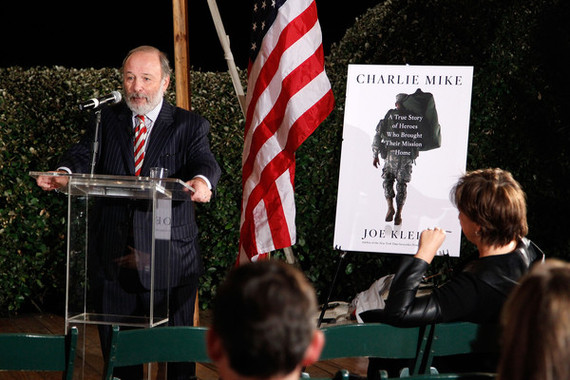 The book explodes like a thriller, opening with Jake Wood, a former marine sergeant, watching T.V. footage of the 2010 earthquake in Haiti, which looked like a war zone, with hundreds of collapsed buildings and dead bodies rotting in the heat. Jake called the Red Cross to volunteer, but was told it was too dangerous and chaotic for untrained volunteers. "I'm a marine," he said. "We do chaos." No thanks, was the reply.

Screw it, Jake thought, I'm going. He put out the word and in 24 hours, he and a handful of other vets were on the ground in Haiti, winging it, calling their mission, "Team Rubicon." They made their way to a refugee camp, but there were no ambulances, few doctors, and limited medical supplies for thousands of wounded people. Jake and his crew strung a tarp from a tree to use as a triage center, so the docs could start working on the most severely wounded. The team retrieved food packages that were piling up at the airport, scavenged for pharmaceuticals, splints and bandages, broke down doors to use as litters, and commandeered taxis to carry the most critical cases to a hospital.

They worked without stopping, snacking on energy bars, and at night would gather for debriefing and to plan their next day. They also talked, Klein writes, "about the strange exhilaration of being part of a military-style mission again. Being part of a band of brothers, but not having to kill anyone."

And they were not alone. A former Navy Seal, Eric Greitens, had formed a different organization, The Mission Continues, which was giving fellowships to vets and training them to be paramedics and do public service. Klein relates their story, which is just as gripping as Team Rubicon's, and leaves the reader feeling awe.

Klein, who writes an award-winning column for Time, has a special feeling for these vets. Klein was in his sixties when he embedded with troops in Afghanistan, walking patrol in an area that was 90% controlled by Taliban. He wore body armor but had no weapon, and I told him he was lucky he hadn't been hurt. "I'm also stupid," he said.

He returned to the Afghanistan and Iraq fronts four times, saying it was "the greatest privilege of my life. It helped me understand what the rest of us were missing: that the post 9/11 military would produce civilian leaders with a genius for service."

He was impressed by the soldiers' skills. He watched Captain Jeremiah Ellis instruct his troops to ask people in the Afghan town of Senjaray what they needed most. They wanted a school that the Taliban had destroyed to be re-opened. Ellis negotiated for and launched a program to refurbish and open the school, which remains active to this day. Klein thought, "If this guy could do that here, under fire and in a foreign language, he could go back to Iowa and become governor."

Surveys show that 90% of vets want to go on serving their communities.

Working with and writing about them underscored what Klein said he's learned in 46 years as a journalist. "You can't have a democracy without citizens. Active citizens, not just people who vote." He says these veterans have the makings of true citizens; they understand that "it aint gonna work unless we all take part."

The brilliance of this book is that it entertains and engages as it brings about a sea change in our views of vets and the military.

I'd love to hear your thoughts -- Please leave a comment.
SIGN UP to receive future posts from Sara.