When I was a freshman at Manhattan School of Music, I practiced orchestral excerpts constantly. The year was 2001 and MSM had just opened their first dormitory featuring 24-hour practice rooms -- a hungry-for-success 18-year-old musician's dream. Mendelssohn, Beethoven, and Debussy were my companions, their flute excerpts, titans of the orchestral audition repertoire, drilled into my muscle memory on an hourly basis.

It was during one of these marathon practice sessions that things went very wrong. Instead of gliding through Debussy's graceful chromaticism in his Prelude to the Afternoon of a Faun, my fingers launched a brutal protest: shooting pain running up through the wrist made it clear my next audition would not proceed as planned. In the following months, as my over-used hands continued to wage civil war, despite dozens of doctor visits, hours of physical therapy, several cortisone shots and surgery, my once-promising fledgling flute career deteriorated into a state of complete disarray. Contemplating what to do with the rest of my life (becoming an astronaut being among the more practical choices), I was positive my fluting days were over.

It turns out I was wrong. After ergonomically modifying my instrument with buttons and duct tape (thanks, Ace Hardware!) I was able to start playing again and eventually returned to school, although obsessively practicing orchestral excerpts held less allure. No longer on track to pursue a conventional performance career, I once again found myself pondering my professional future. (Maybe a stint with the circus would resolve my creative angst?) Luckily, however, before answering the siren call of Barnum & Bailey I discovered new music through Bang on a Can.

Formed in the late '80s by composers Michael Gordon, David Lang, and Julia Wolfe, Bang on a Can is a groundbreaking collective at the heart of the international contemporary music community. It was love at first sight attending their Summer Festival @ MASS MoCA in Western Massachusetts in 2005: here were three highly classically trained composers who created a musical life for themselves and others completely off the beaten track. I was hooked. Happily, I knew I'd never return to traditional orchestral repertoire.

Turns out I was wrong again. Although most of my work since seeing the new-music light has been anything but traditional (avant-garde marching band, anyone?) I do find myself, a decade post-surgery, practicing Debussy's Afternoon of a Faun yet again. But this time around it's not with the injurious drudgery that comes with the unattainable goal of audition perfection. Nope, now I practice for a live performance curated specifically to celebrate the relationship between music of the past and music of the present: Consonant Abstraction: Claude Debussy and Steve Reich at the Museum of Modern Art.

Consonant Abstraction on Feb. 26 is the first of two concerts curated by Bang on a Can co-founder and artistic director David Lang in conjunction with the MoMA exhibition Inventing Abstraction, 1910-1925 that reveal how European composers of a century ago forever changed music in New York. Each concert pairs two composers -- an early-20th-century innovator, and a New Yorker he influenced -- and mirrors the exhibition's exploration of cross-genre artistic mediums. In addition to a rare performance of the Debussy arranged for chamber ensemble, the Feb. 26 concert also features Steve Reich's Electric Counterpoint and Different Trains, while the second series concert on March 4 parallels the work of Arnold Schoenberg and Morton Feldman. (See the full program here.) Both concerts are performed by my fellow alumni and faculty of the Bang on a Can Summer Festival @ MASS MoCA, transporting that Berkshire-based musical utopia at the crossroads of music and art to the heart of Manhattan.

When I was that 18-year-old in a practice room, I wanted nothing more than a shot of performing the mighty classical canon on the stages of New York City. Although that plan transformed more than I ever could have imagined, life has a funny way of working itself out for the best. Now when I reconnect with our collective classical roots, it is with the ability to see that the musical greatness of the past is always present.

Learn more and get tickets to Bang on a Can @ MoMA here.

PHOTO GALLERY
Bang on a Can
Download
Calling all HuffPost superfans!
Sign up for membership to become a founding member and help shape HuffPost's next chapter
Join HuffPost 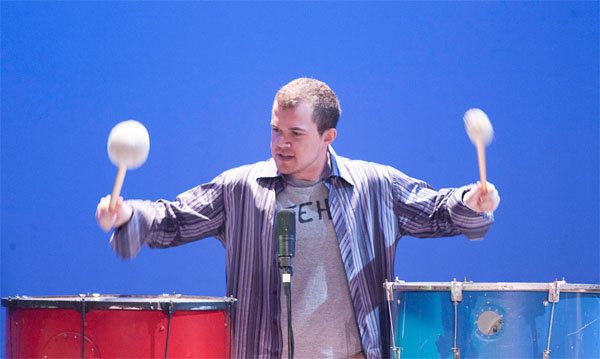