A group of men in Bangalore, India, donned skirts to show support for India's women in the wake of the Dec. 16 gang rape of a 23-year-old student on a bus in New Delhi.

The 25 men in skirts joined hundreds of activists in Cubbon Park Saturday to show that a particular style of clothing does not invite sexual assault, according to a Facebook post about the event.

Samarpita Samaddar, a communications professional, and entrepreneur Aditya Mallya organized the "Skirt the Issue" gathering primarily through Facebook, the Press Trust of India reports. Though the turnout was not as much as they initially expected -- more than 500 men across the country responded -- Samaddar reasoned that "it takes a lot for a man to dress like a woman."

“There has been talk about banning skirts for women in order to prevent rape and honestly I have been angry for a long time but I wanted to do something different like the usual candlelight vigils," she told Daily News & Analysis India. "This is not a protest of any kind."

The skirt rally is one of many anti-rape protests that have taken place across the country in recent weeks, as murder charges are brought against the alleged attackers in the New Delhi case. (The student died at a Singapore hospital just days after the brutal attack.)

However, the use of skirts to raise awareness is, in particular, a nod to Bharatiya Janata Party legislator Banwari Lal Singhal's suggested ban on skirts as school uniforms for girls. Singhal penned a letter to Rajasthan Chief Secretary C. K. Mathew in December, demanding that skirts be replaced by trousers to keep female students away from "men's lustful gazes," PTI reports.

Despite mass rallies and instances of Indian women taking matters into their own hands, sexual attacks in the country have continued, and another woman was allegedly gang-raped on a moving bus in the northern Punjab state of India Friday.

Police arrested six suspects in the case Saturday, including the bus' driver and condutor, who allegedly drove the 29-year-old female passenger to a desolate location, where the assault took place.

Watch footage from "Skirt the Issue" in the video above, or see photos of Indian men wearing skirts during demonstrations in the gallery below. 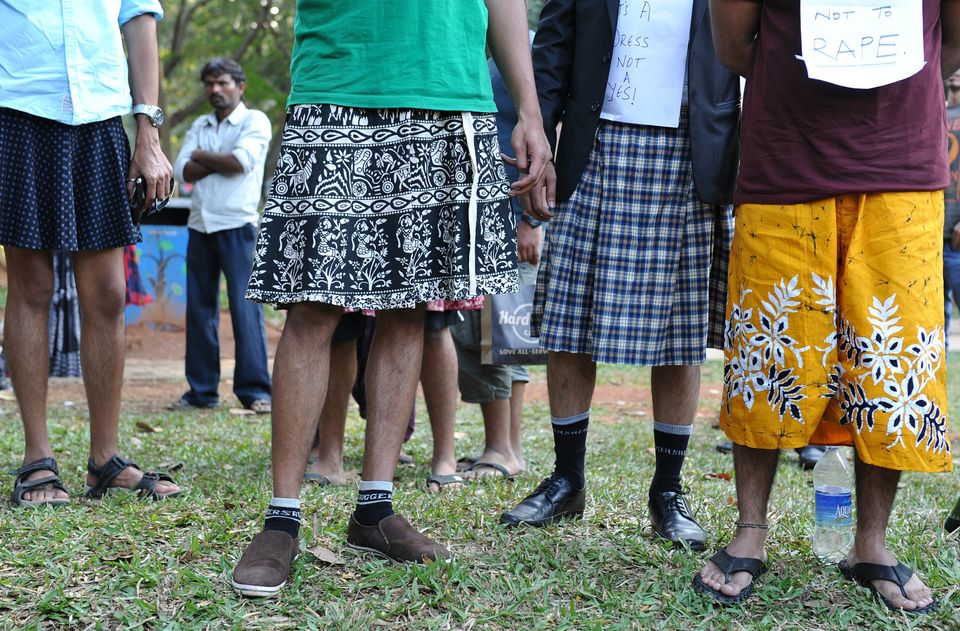