BANGKOK, Aug 18 (Reuters) - Thai authorities have not ruled out any group, including elements opposed to the military government, for a bomb blast in Bangkok that killed 22 people, but officials said the bombing did not match tactics used by insurgents in the south.

Eight foreigners were among those killed by the bombing at a popular shrine on Monday evening, an attack that could hurt Thailand's vital tourism industry.

Police teams were deployed to the blood-splattered site early on Tuesday, some wearing white gloves and carrying plastic bags, searching for clues.

"Police are not ruling out anything including (Thai) politics and the conflict of ethnic Uighurs who, before this, Thailand sent back to China," National Police Chief Somyot Pumpanmuang told reporters.

Hundreds, possibly thousands, of the Turkic-speaking and largely Muslim minority have fled unrest in China's western Xinjiang region, where hundreds of people have been killed, prompting a crackdown by Chinese authorities. Many Uighurs have traveled through Southeast Asia to Turkey.

Prime Minister General Prayuth Chan-ocha told reporters there were "still anti-government groups out there" but gave no further details.

Officials have not blamed any group for the bombing at the Erawan shrine, which the government called a bid to destroy the economy. No one has claimed responsibility.

Prayuth said the attack, which took place during rush hour in the capital's bustling commercial hub, was unprecedented in Thailand.

Police Chief Somyot said the blast was caused by a pipe bomb.

Three Chinese were among the dead, China's official Xinhua news agency said. Two Hong Kong residents, two people from Malaysia and one person from the Philippines also died, officials said. Scores of people were wounded, including many from China and Taiwan.

Thailand has been riven for a decade by a sometimes violent struggle for power between political factions in Bangkok.

Occasional small blasts have been blamed on one side or the other. Two pipe bombs exploded outside a luxury shopping mall in the same area in February, but caused little damage.

Thai forces are also fighting a low-level Muslim insurgency in the predominantly Buddhist country's south, but those rebels have rarely launched attacks outside their heartland.

"This does not match with incidents in southern Thailand. The type of bomb used is also not in keeping with the south," Royal Thai Army chief and deputy defense minister General Udomdej Sitabutr said in a televised interview.

The Erawan shrine, on a busy corner near top hotels, shopping centers, offices and a hospital, is a major attraction, especially for visitors from East Asia, including China. Many Thais also worship there.

"The perpetrators intended to destroy the economy and tourism, because the incident occurred in the heart of the tourism district," Defense Minister Prawit Wongsuwan told Reuters late on Monday.

Tourism is one of the few bright spots in an economy that is still struggling, more than a year after the military seized power in May 2014.

It accounts for about 10 percent of the economy and the government had been banking on a record number of visitors this year following a sharp fall in 2014 because of months of street protests and the coup.

The Thai baht fell to its weakest level in more than six years on Tuesday on concerns that the blast may deter visitors. Thai stocks also opened down more than two percent.

At the scene on Monday evening lay burnt out motorcycles, with rubble from the shrine's wall and pools of blood on the street.

"There were bodies everywhere," said Marko Cunningham, a New Zealand paramedic working with a Bangkok ambulance service, who said the blast had left a two-meter-wide (6-foot) crater.

"Some were shredded. There were legs where heads were supposed to be. It was horrific," Cunningham said.

Authorities stepped up security checks at some major city intersections and in tourist areas.

Police said that attack was aimed at raising tension when the city was under martial law.

The army has ruled Thailand since May 2014, when it ousted an elected government after months of at times violent anti-government protests.

In Washington, the U.S. State Department said it was too soon to tell if a blast was a terrorist attack. Spokesman John Kirby said authorities in Thailand were investigating and had not requested U.S. help so far.

He said U.S. officials were working with Thai authorities to determine if any U.S. citizens were affected by the blast.

The shrine intersection was the site of months of anti-government protests in 2010 by supporters of ousted former Prime Minister Thaksin Shinawatra. Dozens were killed in a military crackdown and a shopping center was set ablaze. (Reporting by Amy Sawitta Lefevre and Andrew R.C. Marshall; Additional reporting by Khettiya Jittapong, Martin Petty, Panarat Thepgumpanat, Arshad Mohammed and David Brunnstrom; Writing by Robert Birsel; Editing by Clarence Fernandez and Ken Wills) 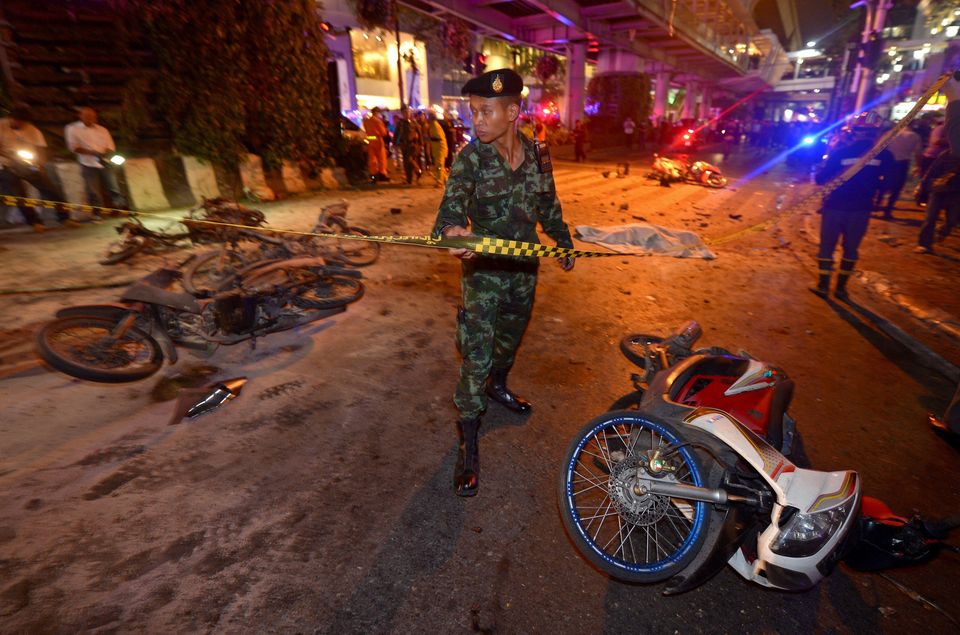 1 / 12
A Thai soldier ropes off the scene after a bomb exploded outside a religious shrine in central Bangkok late on August 17, 2015 killing at least 10 people and wounding scores more.&nbsp;
PORNCHAI KITTIWONGSAKUL via Getty Images