At least five militants attacked a police post in Kishoreganj town, about 140 km (90 miles) from the capital, Dhaka, with small bombs and then set upon police with “sharp weapons”, said chief district administrator, Mohammad Azimuddin Biswas.

Up to 300,000 people had gathered for a prayer service to mark the Eid al-Fitr festival in the town at the time of the violence, nearly a week after militants killed 20 people in an attack on a cafe in Dhaka claimed by Islamic State.

One policeman was killed in a blast and another was stabbed to death. A woman was also killed.

Two attackers were killed and three were arrested, officials said. It was not immediately clear what group they belonged to.

The assault is the latest in a surge in militant violence in the South Asian nation of 160 million that threatens lives as well as its economic wellbeing.

The country depends heavily on its $26 billion garment export sector and insecurity is making foreigners nervous.

“This is very shocking. We are anxious. It is creating an image crisis. Customers are worried,” said Muhammad Saiful Hoque, who works for a garment exporter in Dhaka.

“I fear clients will be reluctant to come for a while. Every incident is adding to that.”

Muhammad Zamir, a former senior foreign ministry official said the country was “going through a crisis”.

“It is a persisting trend of going against principles of Islam,” Zamir said.

Zillur Rahman, a district council administrator, said initial indications were the militants were young, probably in their early twenties or younger.

The situation had been brought under control but police were still checking for other militants, he said, adding prayers were held peacefully after the attack and police asked people to go home.

‘WE WILL FACE THEM’

The site of the attack is called Sholakia Eidgah, a large field where hundreds of thousands of people gathered almost every year since the early 19th century to pray on the occasion of Eid, according to media.

Police had increased security at the site after Friday’s attack in Dhaka, the Independent newspaper of Bangladesh said.

A religious leader preparing to attend the prayer service when the attack took place, Farid-uddin Masud, had recently denounced militancy and led a drive to collect signatures condemning it as un-Islamic.

“It is likely that they targeted me as I have received previous threats,” he said by telephone. “It is their strategy to create panic.”

Last Friday, five young militants killed 20 people, most of them foreigners, in an attack on a cafe in the capital claimed by Islamic State.

It was one of the deadliest attacks ever in Bangladesh, where al Qaeda and Islamic State have made competing claims for a series of killings of liberals and members of religious minorities in the past year.

The government dismissed the claim from Islamic State and insists that all of the violence is homegrown. Nine Italians were killed in Friday’s attack and Italy’s foreign minister said in Rome on Thursday the Islamic State claim was credible.

Police said on Thursday they would collect DNA samples from relatives of the suspected attackers and get statements from survivors as part of their investigation.

Islamic State has warned that the violence would continue until Islamic law was established worldwide, saying in a video that the Dhaka assault was just a hint of what was to come.

The government says it will not be cowed by the violence.

“Their aim is not to establish Islamic ideology but to tarnish the image of the government and the country,” Home Minister Asaduzzaman Khan told Reuters. 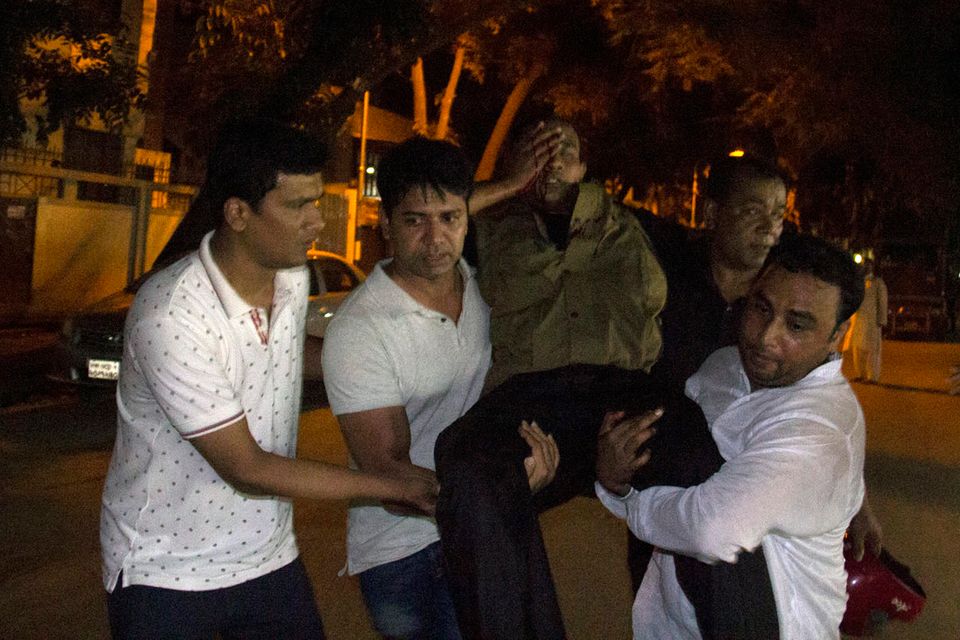 1 / 11
People carry an injured man near the Holey Artisan Bakery restaurant during an attack by unidentified gunmen in Dhaka's high-security diplomatic district on July 2, 2016.&nbsp;
STR via Getty Images