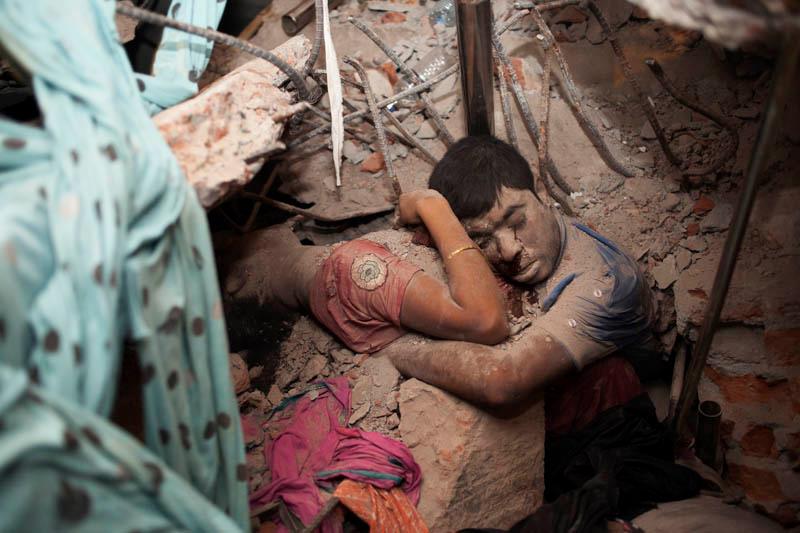 It has been weeks since the Rana Plaza factory complex collapsed in Sarvar, Bangladesh, killing almost 1,100 garment workers who were making cut-piece clothes for Western brands.

The disaster emerged as just another grim reminder of the "haves" of the world bleeding the "have-nots" to death, perhaps in the most brutal and barbaric manner. All for the sake of profitability, greed, and consumerism. As I read and heard the tales of sufferings, I took a quick look at my dark brown skin and recalled the countless episodes of abuse I had either witnessed or heard from poor Asian laborers: Bangladeshis, Indians, Sri Lankans, Pakistanis and Nepalese. Some beyond imagination and many commonly practiced, yet blindly tolerated.

No matter where on earth it occurred -- the Middle East, Europe or Southeast Asia -- the location did not change anything at all. The bigotry was constant and ubiquitous.

The rich Arabs confiscated passports of the Asian migrant workers and abused them as slaves, the stoic Europeans nonchalantly dismissed their lowly existence, and the arrogant noveau-rich Asians got them to build their mansions and clean their toilets, turning a blind eye to their sorrows. Not surprising, then, that the ignominy of being poor in an emerging Asia was indeed dark and harrowing.

The Rana Plaza disaster would have also been easily wiped out of everyone's memories, with that dismissive feel of "oh, one of those Asian disasters, they just keep happening," but for one immensely powerful photograph shot by a young Taslima Akhter, a Bangladeshi photographer who paused the frames of time.

The iconic image of a man and a woman embracing each other in their final moments of death, buried under the rubble of the collapsed building, saw hundreds of thousands of people sharing it on Facebook, Twitter, Google+, Tumblr and LinkedIn.

Time Lightbox dubbed it the "most haunting photograph from Bangladesh." This picture slowed down the process of fading into oblivion and jostled the conscience of everyone who saw it, compelling all to revisit the situation.

The image had gone viral and suddenly everybody knew about Rana Plaza and the plight of the poor workers who died working in those garment factories. It also emerged as the pin-up poster of abused factory workers in Bangladesh and the failure of the state to safeguard them.

The "embrace of eternal love," as the media described the picture, started a global debate. Analysts on television and discussion forums got busy pointing fingers at the turpitude and complicity of clothing giants such as Sweden's H&M, American retailer GAP, UK's Primark and Tesco and Netherland's C&A, all of whom sourced many of their materials from the ill-fated garment factories of Rana Plaza.

Online campaigns shot through cyberspace, appealing to global consumers to pressurize these clothing brands to pledge for minimum wages and boost safety procedures in Bangladesh's garment factories. Pressure group Avaaz's online campaign, "crushed to make our clothes," had more than a million people signing up, eventually forcing H&M to rethink its sourcing procedures and policies.

There was noise everywhere. However, there was one voice that stood apart, weighed down by the sadness of the situation. If at all, this one needed to be heard, over and over again.

Taslima Akhter's photograph had haunted her the most. She found herself drowning in a sea of emotions and her sense of justice was lashing out as violent waves of the sea. Her own take on the situation was beyond any media rhetoric and just as powerful as the picture she clicked.

It was time to connect with Taslima. I did just that and she opened her heart out to me:

"Most Bangladeshis, either from the working class or simple countryside peasants, live an unimaginably inhuman life. These workers who died, were forced to work in despicable conditions with wages as low as $37 per month. Can, then, a poor laborer, for whom merely existence is a struggle, dictate terms?

How can you expect workers to produce quality products without paying them enough or protecting their lives? Would you not expect the fear of an unknown disaster playing somewhere in the back of their minds?"

It is clear that even the state failed to be the first line of defence for these workers. At least 30 of the garment factory owners were members of the Bangladeshi Parliament and yet they couldn't scrape together a minimum wage policy for the workers or mandatory safety procedures.

Some of the tales coming out of these sweatshops are totally unacceptable. Taslima recalls an episode in 2008, when a woman worker named Salma died after falling sick due to an overload of work. Salma had sought a day off but was not granted one. Out of the fear of losing her job, she worked all through the day and night, only to seriously fall sick the next morning and die due to exhaustion and stress.

"And that was just one story," Taslima adds.

"I know for sure that many woman workers suffer from urinary tract infections because they are not allowed to go to the toilet frequently. So they drink as little water as they can while working on their shifts and end up with medical complications, which they cannot afford to treat. Postpartum complications and the lack of childcare facilities for women workers added to their woes.

To add insult to injury, if one complains too much, he is thrown out unceremoniously, pushing him back to the jaws of poverty and starvation. Money meets muscle power and goons are set on those who dared to complain in the first place."

The factory owners comply only as much as they are required to cosmetically appease the authorities. The contrast between the living conditions of the owners and the workers is appalling. But the buck doesn't stop at the factory owners. The cycle of bad business practices comes a full circle with the global clothing labels outsourcing their demands to Bangladesh.

"Don't they know the wage of our workers? What price do they pay to our manufacturers, anyway? And at what price do they in turn sell the product to their elite customers? The comparison tells the story in itself," Taslima says. "They are making a huge profit but are insensitive to the working condition of our workers and their safety. Just think of it, at the bottom of this profit cycle are millions of workers, such as those who died in the Rana Plaza collapse."

Taslima's passionate appeal makes me wonder if such an exploitation would have been allowed in the developed world -- say, the European Union, where human rights issues are gloriously championed, but which does not shy from exploiting the people and resources of the under-developed world. In Pink Floyd parlance, they become comfortably numb.

It is then left up to photojournalists and activists such as Taslima to run through the rubbles, document the lives of the underprivileged, listen to their tales, face the business mafia and yet wave the banner of awareness tirelessly.

The "embracing couple" made us pause for a moment and wonder why such a horrible disaster happened in Bangladesh. Who were they? That's unknown but to think of it they were everybody who went through the harrowing hell in the first place.

"This photograph is haunting me all the time. If the people responsible for this do not receive the strictest punishment, we will see this disaster again. There will be no relief from this horror.

As I have been surrounded by dead bodies, over the past few weeks, I have felt a tremendous pressure and pain. As a witness to this cruelty, I feel a strong urge to share this pain with everyone. That is why I want this photo to be seen over and over again."

It is not just Taslima's pain that reflects in the most melancholic manner through this picture; the image is also an appeal from a poor, developing nation that wants to tread the path of economic success but by not being made a victim of its own circumstances and poverty.

It is a plea of just business practices and fair dealing from millions of deprived workers, who have so far been used as pawns of manufacturing by those who throw a few odd dollars at them from their ivory towers.

In all fairness, let each one of us who saw or shared this picture, be haunted by it until Taslima's lens captures another one for us -- one that reflects parity with prosperity for the garment workers of Bangladesh.