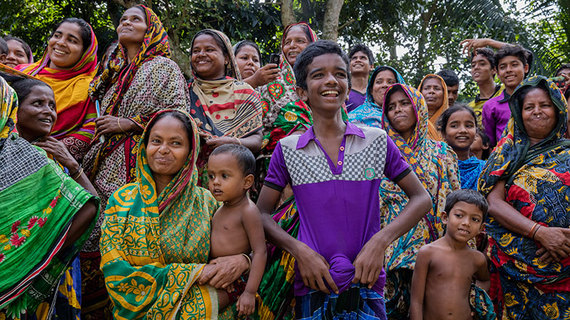 It may come as a surprise to some that I will celebrate the international day to end global poverty in Bangladesh - a country often associated with extreme poverty. Born from the ashes of its war for independence in 1971, Bangladesh has a history of famines and cyclones that have claimed countless lives.

But Bangladesh today is an example of how rapidly a country can emerge from the depths of poverty. When on Monday we mark End Poverty Day, we will join its people to celebrate the progress in Bangladesh, and share lessons about what has been achieved and what still needs to be done.

Critically, Bangladesh recognized early on that empowering women is crucial to ending poverty. The national family planning program in the 1980s reached women in their homes through a model of door-step delivery of contraceptives by an army of female health workers. Fertility rates have fallen from 6.9 births per woman in 1971, to 2.3 births today - almost at population replacement level. In the 1990s, the female secondary school stipend program, one of the first conditional cash transfer program in the world, helped achieve gender parity in secondary education.

Others also innovated in ways that have spread around the world. Large organizations - including BRAC and Grameen that are known worldwide -- brought microfinance, investments in female-owned small businesses, and other initiatives to empower poor people.

Bangladesh recognized early that investments in people are just as critical as investments in hard infrastructure. Human capital investments can spur economic growth and enable a country to compete effectively in the short, medium and long term. Infant mortality and fertility rates in Bangladesh are lower than the average for countries at a similar stage of development. Access to sanitation, and immunization rates, and the number of years children spend in school are all higher than in India.

Bangladesh's private sector has played a huge role in the country's progress. Between 2003 and 2013, women's employment rose from 7 million to 17 million. Some 4 million women, mostly from poor rural areas, work in the ready-made garment sector, and this number is set to rise as jobs migrate from China to other countries.

These economic and human development achievements have occurred amid challenging conditions. Bangladesh is in the most climatically vulnerable area to severe cyclones, accounting for 70 percent of all storm surges in the world.

Bangladesh has been a forerunner in adaptation and disaster-coping mechanisms, and these have reduced the impact of recent storms, cyclones, and floods.

In its quest to end poverty, Bangladesh got many of the basics right. Since 2000, the economy has been growing consistently at 6 percent, on average, every year, helping lift millions of people out of poverty. New data from the World Bank released earlier this month showed that 20.5 million Bangladeshis escaped poverty between 1990/91 and 2010.

Bangladesh's people also would be the first to recognize that much still needs to be done. The country still had 28 million poor people in 2010, our latest estimates from household surveys.

Bangladesh's ambitions remain extraordinarily high. Its goals are to become a middle-income country by 2021 and to end extreme poverty by 2030. To do this, the country needs to sustain its economic growth, create more and better jobs, focus on energy and transport infrastructure, make progress on improving the quality of health and education, and improve governance and strengthen anti-corruption measures.

The World Bank Group is looking forward to working with Bangladesh to promote private sector investment by strengthening governance and improving the investment climate. Strengthening governance will be important for areas critical to job creation: infrastructure, diversifying exports, moving up the manufacturing value chain, and ensuring the health and safety of workers.

But when we take a longer view of the country, we see that Bangladesh has proven that a long list of hardships does not mean there's no hope. In fact, it has shown that innovation, commitment, and setting goals can accomplish feats that few dared imagine. I believe that Bangladesh will continue to build on this outstanding record and it will end extreme poverty by 2030 and continue to boost shared prosperity.

Jim Yong Kim is President of the World Bank Group.