Minutes before, the upscale restaurant had been brimming with life. "I was waiting for my food when they walked inside--young, barely a year or two older than me, wearing jeans and t-shirts. They looked like the other customers. Within minutes they pointed their weapons at us, killed the foreigners and took us hostage," says Tahmid, a 17-year-old who survived the terrorist attack at Holey Artisan Bakery in Dhaka, Bangladesh. At a nearby table, Nadia Benedetti, an Italian, was at her farewell dinner with friends and colleagues from Italy. Her face beamed as she saw the laughter in her friends' eyes, listened to the sound of clattering silverware and wondered how fond she has become of this place. The next morning, police recovered her stabbed, lifeless body along with 17 others.

The 11-hour terrorist standoff that ended Saturday morning took 28 lives, including five assailants, two police officers, 17 foreigners and three Bangladeshis. While the incident was underway, ISIS claimed responsibility, releasing images of the victims and attackers online. As I scrolled through the pictures and videos, I felt I was reading about a restaurant in Kabul or Aleppo, or a page from a Khaled Hosseini novel.

The Bangladesh I remember is hospitable and tolerant. Yet, like 165 million Bangladeshis, it dawned on me this is happening in Dhaka. This was home. 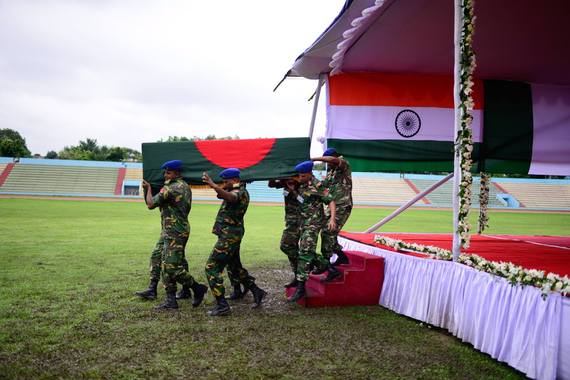 Since 2013, Bangladesh has been grappling with a growing number of machete attacks and killings targeting secular writers, free speech advocates, and human rights activists. This April, my friend Xulhaz Mannan, a gay rights activist and staff at U.S. Agency for International Development and his friend, Tanay Majumder, were hacked to death at home. Last year, American-Bangladeshi writer and curator of Bengali blog Mukto-Mona, Avijit Roy was killed at Ekushey Book Fair, the country's largest annual gathering of writers and publishers. Local extremist groups claimed these attacks. The sophisticated planning of the hostage standoff, however, suggests the growing involvement of ISIS beyond the Middle East in countries like Bangladesh. For many native Bangladeshis like me, the tension between the secular values and fundamentalist Islam is rooted history. A fast growing metropolis with one of the largest Muslim populations in the world, the fabric of the Bangladesh's making tells a story of identity conflict. In 1947, the partition of the British colonial Empire into India and Pakistan had overt religious reasons--Hindus and Muslims hastily clumped together to occupy separate lands, irrespective of ethnic and cultural identities.

Despite being separated by 990 miles of Indian territory, the provinces of West and East Pakistan were administered by a central government based in Karachi. Pakistan underwent several constitutional changes between 1948 and 1962 in attempts to balance secularism with the Islamic state. In 1962 a new constitution made few concessions for Bengalis in the East and gave legal support to martial law. The Awami League, then led by Sheikh Mujibur Rahman advocated for an autonomous government and, eventually, liberation of East Pakistan. In December 1971 after 9 months of war, an independent, democratic and secular Bangladesh was established.

For 25 years, I have known my national identity to blend seamlessly with my cultural and religious ethos. Growing up, I remember a religious teacher coming to our house and teaching us to recite the Qu'ran in Arabic. My siblings and I were never told what it meant, however that didn't stop us from celebrating Bengali New Year in April. We broke fast during Ramadan by sharing our meal with everyone around us irrespective of religious and ethnic identities just as we helped Christian friends decorate Christmas trees and devoured the sweets served at temples during Durga Puja, the Hindu festival. Most of my Bengali Hindu friends have family ties in Kolkata, the Western state of India, with whom we share more cultural heritage than our once Muslim counterpart in Pakistan.

In 2013, I found myself chanting slogans on the streets for a secular Bangladesh. The movement erupted in Shahbagh, the epicenter of Dhaka, when the government started trying the war criminals of 1971, men, who, in independent Bangladesh, had risen to positions of influence within Jamaat-e-Islami, Bangladesh's largest Islamist political party. People gathered in the streets to protest punishments that they saw as too lenient, even politically expedient. By the fourth day, the slogans had evolved; they now sought revenge on years of Jamaat's control in national policy and ban on religious scribes and institutions.

In the months after Shahbagh, it became clear to me that we were struggling with an identity crisis. It was no longer enough to be just Bangladeshi - you had to be secular or a fanatic believer. To belong, you either had to embody the white liberalism under your brown skin and speak fluent English, or be clad in an ankle-length punjabi and graduate from a madrassah.

Having undergone two traumatic separations in quick succession, the modern Bangladeshi identity is a hotchpotch of religious and cultural values. In the backdrop of this crisis, when ISIS released the photos of the assailants, Bangladesh was taken aback. Three of the five assailants were educated abroad, watched English Premiere League and came from affluent families. They were the picture of the secular youth we had painted in our imaginations, the boys we would gladly live next door to. Now, we were thunderstruck and confused - had terrorism hit the safest parts of our homes? Have we been alienating the wrong people in the name of liberalism?

This crisis we face today is existential. For four decades, divisions along religious and cultural lines have been systematically nurtured through Bangladesh's education system--a handful of private English-medium schools following Western curriculum, with a majority of Bengali-medium schools under national curriculum, and the plethora of registered and unregistered madrassah following two streams of Islamic curriculum.

Through these rigid divisions we have oppressed intelligent and compassionate religious education in urban youth the same way we have oppressed sex education. Most teenagers I know in Bangladesh will turn to the Internet, to pornography, to learn about the human body. It now seems most teenagers I know in Bangladesh will also go to the Internet to learn about religion, where they may find a rogue preacher with misconstrued ideas. Similarly, we have alienated impoverished, madrassah students from aspirations of becoming filmmakers.

The current administration under Prime Minister Sheikh Hasina has been in denial of ISIS and miliant Islamist presence in the country, discarding the incidents as disconnected pangs of violence. There is precedence for this. In 2005, the government then helmed by Khaleda Zia only admitted to the presence of Islamist militants after a wave of simultaneous bomb blasts gripped the nation. If the current government wishes to keep the people's faith, it needs tackle the issue it at its core - starting with a disorganized education system that promotes division and competition over inclusiveness and conversation. At home, it is time to reconcile our religious and cultural identities into a fluid national identity that can evolve into the global one we are proud of.

After Friday's terrorist attack, I spent a few minutes looking up one of the assailants on Facebook. We had 37 mutual friends, all from the liberal social circle I am familiar with. Since January, he'd been missing from home. Now a picture of him, smiling while bearing the ISIS flag was going viral. Within minutes, he was 'unfriended' by everyone; we now only have one mutual friend, someone who lives on a different timezone.

I couldn't help but wonder: is this the way his friends turned their backs on him when he was just beginning to question his religious identity? Was the only person he could talk to an ISIS recruiter? As the world tries to fathom the senseless terrorist attacks from Paris to Istanbul to Dhaka, it's time we dig deeper into our systems and start asking why.

Journalist and Founder at One Degree Initiative Foundation.