Capital--the excess of assets over liabilities--determines solvency, so policymakers are used to thinking of it as a tool for keeping banks and the banking system safe. House Financial Services Chair Hensarling's proposal to allow banks to opt for a simple capital standard that would substitute for other regulatory oversight is just the most recent example.

But bank capital also is a critical factor in the transmission of monetary policy. When central banks ease, their actions are intended to encourage banks to lend and firms to borrow. And, to put it simply: healthy banks lend to healthy firms, while weak banks lend to weak firms (if at all).

Macroeconomics textbooks of yore paid little attention to the proper functioning of the financial system and the role of banks in the transmission of monetary policy to growth and inflation. But the series of financial crises in the advanced economies--beginning with the bursting of Japan's asset price bubbles in 1990--has changed all that. Today, explaining the interactions between the financial sector and the real economy is a major focus not only of research, but of textbook descriptions as well. Helping students understand how an impaired financial sector stifles the effectiveness of monetary policy is a key element in any intermediate macroeconomics textbook (see, for example, here).

The following chart from the Gambacorta-Shin paper illustrates the positive relationship between bank capitalization and lending growth. Each dot represents average level of leverage for one of 105 large banks from 14 advanced economies over the 19 years from 1994 to 2012. (At the end of the sample, these banks held nearly $59 trillion of assets, equivalent to nearly 80% of 2012 global GDP.) The horizontal axis shows the ratio of equity to assets (the leverage ratio above), and the vertical axis measures the average annual rate of lending growth. While the sample is noisy, even this raw data (unadjusted for bank and time fixed effects, or for other macroeconomic controls) exhibits a clear positive relationship, consistent with the view that better-capitalized banks lend more. 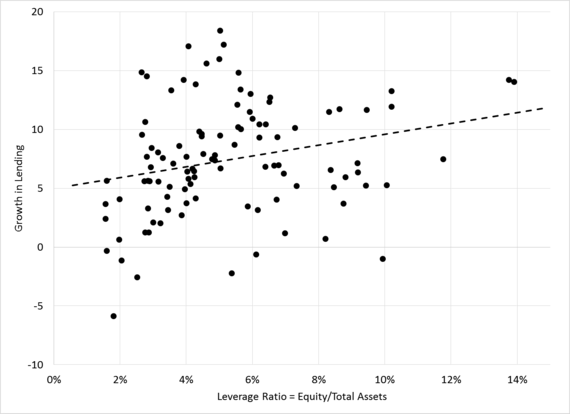 Source: Leonardo Gambacorta and Hyun Song Shin, "Why bank capital matters for monetary policy," BIS Working Papers No 558, April 2016, Figure 1; and authors' calculations. Note that we plot the inverse of each bank's average ratio of assets to equity.

This positive relationship between bank capitalization and lending growth should provide comfort to regulators who are still in the process of raising capital requirements. Back in 2010, research from the banking industry argued that raising capital requirements would diminish long-run economic growth, while a study by the Macroeconomic Assessment Group for the Financial Stability Board and Basel Committee on Banking Supervision concluded that the impact would be meager. The latter result was obtained despite the assumption--in contrast to the first stylized fact above and in violation of the Modigliani-Miller theorem--that higher capital would not lower bank debt funding costs, and that these higher combined funding costs would be passed on to borrowers one-for-one. As we explained elsewhere, the verdict is in: the gradual imposition of higher capital requirements generally did not diminish lending.

The importance of capital as a foundation for bank lending is consistent with the painful lessons learned by many monetary policymakers who, in recent decades, sought to stimulate their economies in the face of impaired banking systems. The experience of Japan in the 1990s is the premier example. While the collapse of land and equity prices began in 1990 and was far advanced by 1992, persistent regulatory forbearance delayed a thorough recapitalization of Japan's banks for more than a decade (see here). Caballero, Hoshi, and Kashyap (CHK) describe the effects of the persistent debt overhang: "[S]ham loan restructurings ... kept credit flowing to otherwise insolvent borrowers."

Gambling for redemption (either through a government bailout or an economic recovery), banks in Japan "evergreened" loans to avoid acknowledging losses. However, by sustaining zombie firms, intermediaries also undermined the usual process of creative destruction, preventing a shift in the allocation of capital and other resources to more productive activities, "prolonging the Japanese macroeconomic stagnation." Overall, CHK estimate that the share of zombie firms--defined as those receiving subsidized credit--surged from less than 10% to more than 30% in the decade after the asset price bubbles burst (see chart below).

Put differently, Japanese banks, which provided most of the external credit available to firms and households, failed to respond to monetary policy stimulus in the 1990s by expanding credit to healthy borrowers. Even the zero-interest-rate policy (ZIRP) that started in 1999 had limited impact until 2003, when regulators finally pressed banks to write off nonperforming loans and rebuild capital. Until then, the willingness to pile on more and more bad loans dampened the economic impact of monetary stimulus and extended the slump. The lesson is clear: zombie banks make loans to zombie firms.

Unfortunately, the euro area has been following the same path with a similar outcome. As in Japan, banks in the euro area are the prime source of external finance for the business sector. Since the summer of 2012, when President Mario Draghi promised to do "whatever it takes" to preserve the euro, the European Central Bank (ECB) has undertaken a series of aggressive policy actions--more aggressive than those of the Bank of Japan in the 1990s. The ECB's actions eased strains on the euro-area banking system, as the drop in sovereign yields boosted the capital of banks that held the debt (usually with a home-country bias). After years of retrenchment, aggregate loans outstanding from euro-area banks to the private nonfinancial sector finally turned up over the past year.

However, recent research by Acharya et al. on the impact of the ECB's 2012 Outright Monetary Transactions (OMT) announcement--the first step in President Draghi's rescue of the euro--suggests that (as in Japan in the 1990s) zombie lending dampened the policy impact on real economic activity. Using a wide range of data on individual bank lenders and firm borrowers for the period from 2009 to 2013, the authors argue that, while the policy improved capitalization and encouraged lending by banks in peripheral economies, it also:

To us the conclusion is clear: A well-functioning financial system is the foundation for effective monetary policy. When banks are undercapitalized, they react to an easing of monetary conditions by increasing their exposure to zombie firms, evergreening loans and hoping that an economic recovery (or their government) will bail them (and their zombie firm borrowers) out. Regulatory forbearance that delays recapitalization (as in Japan) or results in insufficient capitalization (as in the euro area) thwarts monetary stimulus, delays recovery and imposes enormous long-run economic costs on society. In contrast, countries that move quickly to recapitalize their impaired banks, as Sweden did in the early 1990s and the United States did in 2009, outperform relatively quickly.

So, regardless of the perceived short-run pain, when banks hit on hard times, the first order of business should always be to compel them to recapitalize. Regulators who tolerate banks that "extend and pretend" are gambling unwisely. Only with a healthy financial system will monetary policy be able to provide the stimulus necessary to return the economy to a path of strong, stable and balanced growth.