Dominique Hudson is fed up with giving Wells Fargo her bus money.

Each month, the 18-year-old from Oakland, Calif., pays the bank about $12 in ATM fees to access cash from CalWORKS, California’s principle welfare program. The mother of a 3-year-old boy who relies on the public bus to get to her minimum wage job at a grocery store, Hudson could use that money for about five commutes.

Instead, she's losing it to the bank. "That's not good at all," she told The Huffington Post.

California welfare recipients paid $19 million in ATM fees last year to withdraw their benefits in cash, according to a new study from the California Reinvestment Coalition, a low-income advocacy network.

These millions didn't have to go to the banks. Critics say big financial institutions could easily afford to waive transaction fees for welfare withdrawal. They also blame welfare administrators for not doing a better job spreading the word about no-fee ATMs that are available to beneficiaries.

Those unfamiliar with the modern-day welfare system may be surprised to learn that benefits no longer arrive via paper check. California is one of many states who provides benefits by putting money on cards. Like bank-issued debit cards, people can use a card issued by CalWORKS to make fee-free purchases at stores. But to take out the money in cash, people must pay a fee if they don't use a pre-approved ATM. The extra cost is usually around $2-$4, the same that anyone would pay for using an out-of-network ATM. One of the frustrating parts of this system for Hudson is that she actually has a bank account at Wells Fargo, but because her CalWORKS card is considered out-of-network there, she still has to pay fees.

In California last year, Bank of America earned $3.6 million from welfare-related ATM fees, JPMorgan Chase made $2.8 million and Wells Fargo made $2.3 million, according to the study.

“Banks don’t need this money," said Jessica Bartholow, a legislative advocate at the Western Center on Law and Poverty. "They don’t need it like a child who’s living 50 percent below the poverty line needs the money.”

California welfare administrators are also under fire for not spreading the word about a free withdrawal option: There are 2,437 ATMs in the state branded as MoneyPass locations, at which welfare recipients can use their state-issued cards to withdraw cash up to four times a month, without a service charge. Yet just 9 percent of all CalWORKS withdrawals last year were made at a MoneyPass ATM, the study found. Critics of the system say this gaping discrepancy is due to a patchy network of poorly labeled machines.

Welfare recipients also have a legal right to have their benefits deposited to a bank account through direct deposit. But most are unaware of the option, and critics say the process is highly cumbersome and time-intensive. As a result, fewer than 4 percent of California welfare recipients used Direct Deposit in August, according to the study.

For some welfare recipients, a few dollars might mean the difference between walking or taking the bus -- or, in dire cases, eating or not.

“Both taxpayers and benefit recipients lose out when recipients spend millions of taxpayer dollars on avoidable fees instead of meeting household needs," Andrea Luquetta, the author of the California Reinvestment Coalition study, told HuffPost. 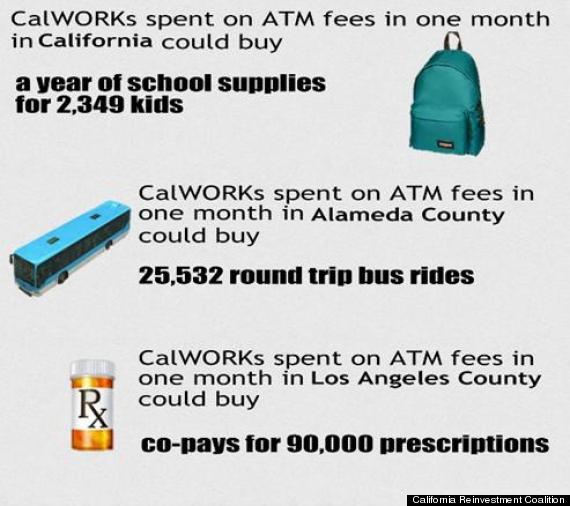 The California Department of Social Services, which runs CalWORKS, is rolling out a program that automatically calls welfare recipients when they incur a high amount of ATM fees, said Michael Weston, a spokesman.

The department tried to convince banks to waive the costly fees in 2011, but hit resistance, Weston said. They’ve since abandoned the strategy of pressuring the banks, and now emphasize teaching welfare recipients how to avoid the charges, he said.

“We would like to help [welfare recipients] maximize their benefits,” he said.

Those education campaigns have had mixed results. A website designed to allow welfare recipients to track their ATM withdrawal fees was visited by about 1 percent of the state’s total recipients in January 2014, according to the study.

The practice of welfare money going to big banks isn't confined to California. The Huffington Post has previously reported on how banks are profiting by extracting fees to access unemployment benefits and food stamps all over the country.

Bank of America and JPMorgan Chase did not respond to requests for comment.

Richele Messick, a spokesman for Wells Fargo, said the bank's fees are "open and transparent” and that the withdrawal fees are charged to all non-customers, welfare or not.

“We welcome the opportunity to open them an account,” she said.

Some low-income people eschew traditional banks, turning instead to alternative financial institutions -- places like payday lenders and check cashiers -- for their banking needs. More than 25 percent of Californians either don’t have a bank account or do but primarily rely on check cashiers, according to a 2012 FDIC study. The 2012 study also polled people on why they were wary of traditional banks, and people cited reasons like high fees, inconvenience, and blocks by a bank over poor credit history.

Dozens of other banks and credit unions that are part of the MoneyPass network have agreed to waive ATM fees for welfare recipients. But the question remains: Can Californians can find them?

Hudson, the young mother, said she remains confused about the fee system. The closest MoneyPass ATM to her home is in a Walgreens a little over one mile away. But when she called the drugstore to verify that it was indeed free, a clerk told her that all their ATMs charge service fees, she said. A local Walmart also mistakenly told her that their MoneyPass-branded ATMs charge fees, she said.

Luquetta, the author of the study, said this example typifies a broad lack of understanding about the MoneyPass system.

“There’s so much misinformation out there,” she said. 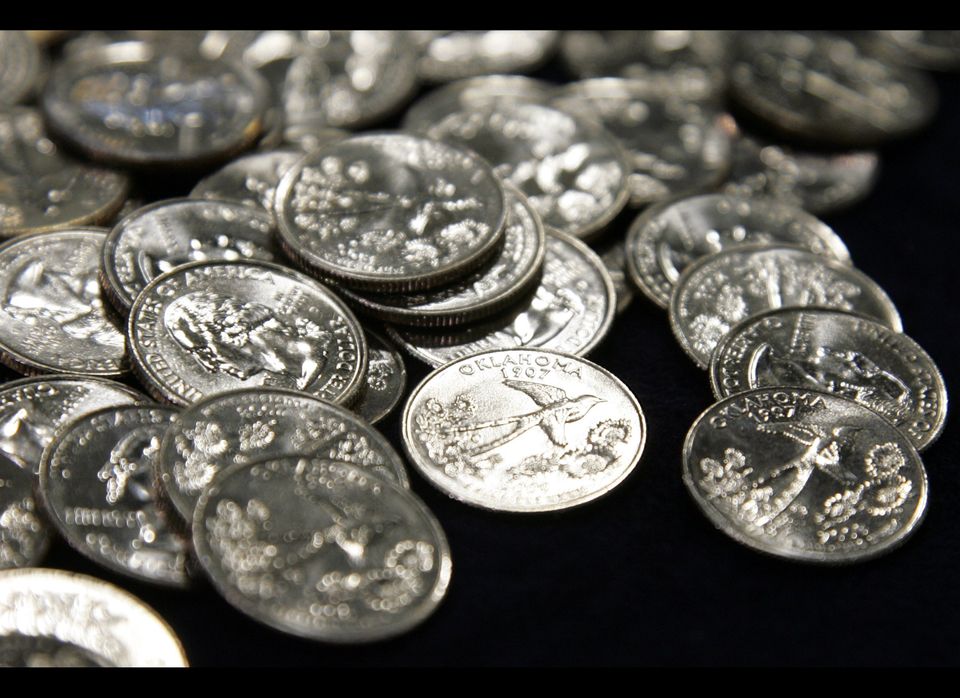