More than one in four U.S. banks are unprofitable, a number fueled by rising numbers of bad loans, the FDIC announced Thursday.

The percent of banks losing money has quadrupled since 2005. The U.S. added 111 banks to its "Problem List" for a total of 416, a 15-year high (the FDIC doesn't publicly identify those banks). And the rate of loans that are at least 90 days late or are so late they're no longer accruing interest is the highest recorded in U.S. history.

A look inside the FDIC's numbers also sheds light on how U.S. consumers are managing the recession. The health of banks is not just a Wall Street problem, or one for federal bank regulators in Washington, D.C.

It's not a pretty picture. The amount of loans banks are charging off is rising (when banks charge off a loan it means they don't expect the borrower to repay). There have been more charge-offs on multifamily home loans (apartment buildings) so far this year than all of 2008. [See Figure 1 below] Looking at the past two quarters, overall charge-offs have increased 28 percent; on home loans they've increased 25 percent; and credit card charge-offs are up 21 percent.

The financial armageddon many feared last fall never materialized, but these numbers show that the expected losses continue to rack up, especially among homeowners. [See Figure 2 below]

As the Huffington Post reported earlier this year in our series, Dispatches from the Displaced, homeowners are struggling. Home mortgages at least 90 days delinquent have quadrupled to about $65 billion since the same period last year. [See Figure 3 below]

But it's not just homeowners. All borrowers are hurting. Loans late at least 90 days have doubled since September 2008. [See Figure 2 below]

As for the type of banks taking these losses, it's the big banks that are suffering the most. Nearly half of banks with more than $10 billion in assets are unprofitable through the first six months of the year (41%); for smaller banks, it's just 26 percent (banks with less than $100 million in assets). Then again, the biggest banks have received the biggest government bailouts. 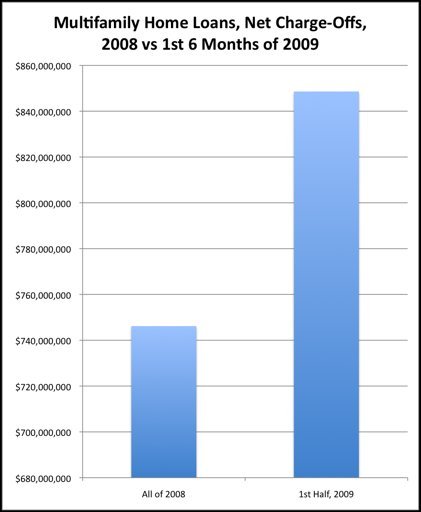 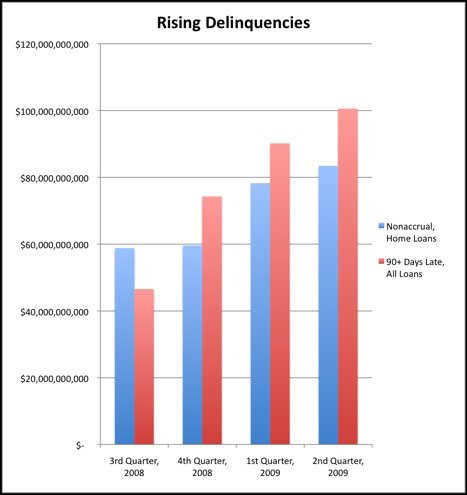 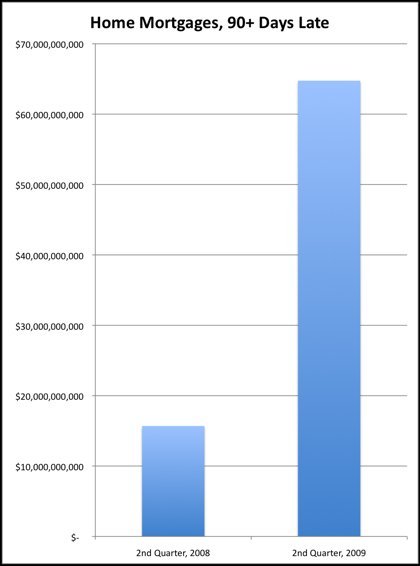