It may be harder to get cash from Bank of America as its ATM network shrinks, but starting this week it'll be easier for customers to give the bank their money.

On Tuesday, the Charlotte, N.C.-based bank made life a bit easier for its 10 million mobile customers by adding a mobile check deposit feature to its iPhone app.

This feature allows an account holder to snap photos of the front and back of a check and deposit it into one or more accounts remotely.

The service, which works on the bank's iPad app, will be available for Android or Windows-based phone in the near future, according to MyBankTracker.com.

The rise in mobile banking comes as banks look to cut costs by closing branch locations. Bank of America has said it planned to shutter 1 in 10 branches by 2014 and, overall more than 1,400 bank braches closed between 2009 to 2011 in the United States, the Boston Globe reported. Regulations changing where banks can get revenue and compliance costs have contributed to branch closures.

Check out screen shots of the app below 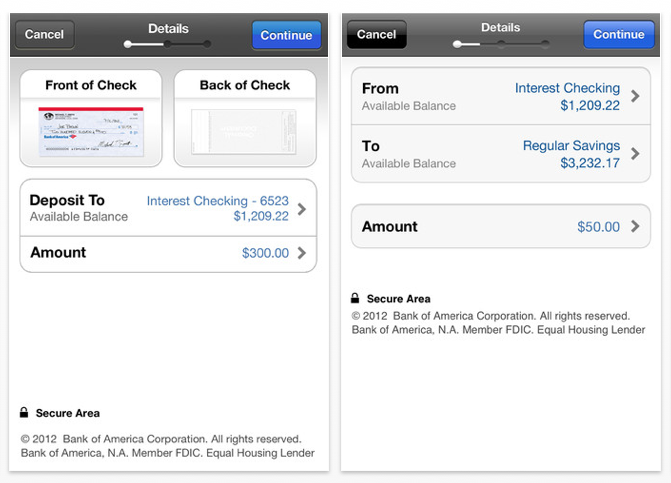 Voting Made Easy
Register to vote and apply for an absentee ballot today
Register now
More:
Moneymobile bankingiphone-appdebit cardsBank of America
Newsletter Sign Up
Everything you should have learned in school but didn’t
Subscribe to HuffPost’s money and living email.
Successfully Subscribed!
Realness delivered to your inbox