Bank of America announced it will stop handling transactions for WikiLeaks, the controversial non-profit group that has published secret government data and communications.

In a tense response posted on Twitter late last night WikiLeaks urged customers to stop doing business with the bank and suggested the consumers could find safer places to put their money. See WikiLeaks' Twitter response below: 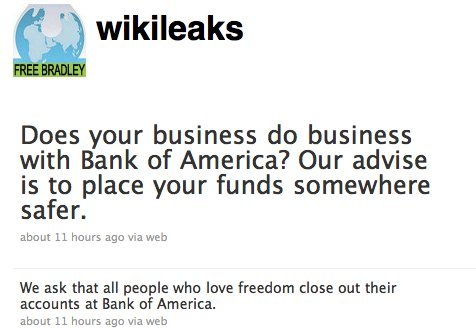 According to the AP: "The bank said in a statement that it believes that site 'may be engaged in activities that are, among other things, inconsistent with our internal policies for processing payments.' It joins financial institutions including MasterCard and PayPal that have stopped handling payments for the site."

In a cover story published last month in Forbes, WikiLeaks founder Julian Assange, who was recently released from a British prison, said that the organization's next leak, due out early next year, will involve at least one major American bank.

In a 2009 Computer World interview, Assange said that his organization had obtained a 5GB hardrive from a Bank of America employee, but had been struggling with the best way to present the hard drive's data.