Here's what the White House wants you to take away from today's statement by President Barack Obama announcing tougher regulations of the nation's biggest banks: Former Fed Chairman Paul Volcker is off the bench and the "too big to fail" banks are in the crosshairs.

As economist Simon Johnson noted here early this morning, Volcker has won "an important round."

Obama's new proposal calls for limits on the size and risk taken by the country's biggest banks, and -- in dramatic contrast to the pish-poshing we were hearing from his economic team up until very recently -- embraces the previously outcast Volcker's proposal to restore the spirit of post-Great Depression rules that prevented commercial banks from making risky trades. It also stops big bank mergers going forward.

As Johnson put it, "This is an important change of course that, while still far from complete, represents a major victory for Volcker -- who has been pushing firmly for exactly this."

President Obama joined Paul Volcker, former chairman of the Federal Reserve; Bill Donaldson, former chairman of the Securities and Exchange Commission; Congressman Barney Frank, House Financial Services Chairman; Senator Chris Dodd, Chairman of the Banking Committee and the President's economic team to call for new restrictions on the size and scope of banks and other financial institutions to rein in excessive risk taking and to protect taxpayers.

And just to make this all abundantly clear, as Obama's team of financial gurus strode into the room to meet the press, it was Volcker who was conspicuously positioned, along with Vice President Joe Biden, as Obama's wing man. 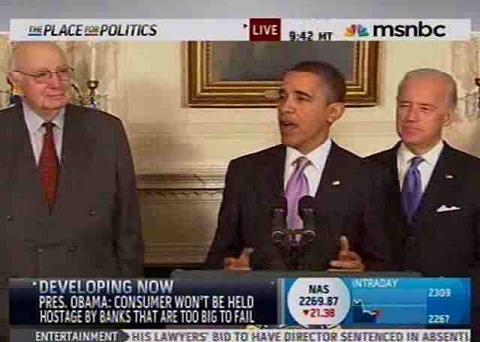 Just a day after Robert Gibbs addressed the White House press corps using the phrase "anger and frustration" about a dozen times, Obama ratcheted up what I would term the "post-Scott Brown" emphasis on populist rhetoric:

OBAMA: My message to leaders of the financial industry is to work with us and not against us on needed reforms. I welcome constructive input from folks in the financial sector. But what we've seen so far in recent weeks is an army of industry lobbyists from Wall Street descending on Capitol Hill to try and block basic and common-sense rules of the road that would protect our economy and the American people. So, if these folks want a fight, it's a fight I'm ready to have. And my resolve is only strengthened when I see a return to old practices as some of the very firms fighting reform. When I see soaring profits and obscene bonuses of some of the firms claiming they can't lend more to small businesses, they can't keep credit card rates low, they can't pay a fee to refund taxpayers for the bailout without passing on the cost of shareholders or customers -- that's the claims they're making. It's exactly this kind of irresponsibility that makes clear reform is necessary.

Who could Obama could possibly be talking about? From Stevenson Jacobs, Associated Press, January 21, 2010:

The company rewarded its employees with $16.2 billion in salaries and bonuses for 2009, up 47 percent from the previous year but still lower than many had expected. Compensation accounted for 36 percent of Goldman's $45.17 billion in 2009 revenue, the lowest annual ratio ever for the company. In 2008, Goldman set aside 48 percent of its revenue to pay employees.

The pullback in pay helped the bank easily top analysts' earnings estimates. Goldman earned $8.20 a share in the last three months of the year, well above the $5.20 a share expected by analysts surveyed by Thomson Reuters.

Also today, a report from Consumer Watchdog documents the sickening flow of financial industry money, carried forth by that "army of lobbyists" in an attempt to derail reform:

A report released today by Consumer Watchdog on the financial industry's efforts to neuter the financial reform bill in Congress, and the Senate Banking committee in particular, finds the sector gave $41 million to committee members since 2005 and spent $336 million lobbying Congress in the first three quarters of 2009...

The Consumer Financial Protection Agency (CFPA) has been a central point of attack for commercial banks battling financial reform. Banks want consumer protection authority to remain with the regulators who failed to rein in abuses like predatory mortgage lending that contributed to the economic meltdown. The largest bank contributors to Congress in 2009 include leading opponents of the CFPA: the American Bankers Association, Citigroup, Bank of America and JP Morgan Chase.

"To ordinary voters, this flood of dollars looks like Wall Street buying votes," said [Carmen Balber, Washington director for Consumer Watchdog]. "The fate of an independent consumer regulator is a test of whether politicians will rise above financial industry influence to enact meaningful regulatory reform that directly aids ordinary Americans. If Senators don't stand up to the financial industry in the midst of the Great Recession, they never will."

Worth noting: one of the key figures in the Consumer Watchdog report is Senator Chris Dodd (D-Conn.), who was standing in the room, flanking Obama. The report says that Dodd, "Chairman of the Senate Banking committee, was the top recipient of industry money, and took $9,000,975 from the financial sector since 2005." (You can download the full report (PDF) here.)

But for the moment, Tall Paul has his victory - and is accordingly being granted ownership of these policy recommendations. Immediately following the announcement, MSNBC's Tamron Hall referred to Obama's proposed reforms as "the Volcker rules."

WASHINGTON, DC- President Obama joined Paul Volcker, former chairman of the Federal Reserve; Bill Donaldson, former chairman of the Securities and Exchange Commission; Congressman Barney Frank, House Financial Services Chairman; Senator Chris Dodd, Chairman of the Banking Committee and the President's economic team to call for new restrictions on the size and scope of banks and other financial institutions to rein in excessive risk taking and to protect taxpayers.