As the regulations created by Dodd-Frank are chipped away, many are asking why the federal government is unable to enforce banking reforms even after the worst financial crisis since the Great Depression. One major factor is the revolving door of Wall Street lobbyists, lawyers, government regulators, and elected officials, which has created a shared culture and common world-view that undermines the drive for fundamental change. Economic and political actors are, after all, social beings and repeated interactions can create cohesion even among professed adversaries. 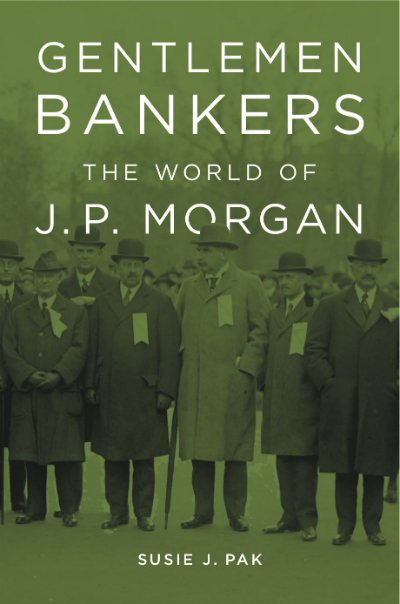 The dynamic today in many respects echoes that of a century ago when American reformers established the institutions that remain the centerpiece of our regulatory apparatus, such as the Federal Reserve. Despite these reforms, fundamental changes to the practices and makeup of the banking community remained elusive and financial crisis returned with a vengeance 20 years later.

Gentlemen Bankers: The World of J.P. Morgan argues that government reforms did not work because they ignored the personal and social ties that structured the cooperative culture, which was central to how the financial community conducted its business. In this section of the book, we see how the partners of J.P. Morgan & Co., America's most powerful private bank, coped with the threat of government regulation through a social and personal network that they knew simply as their friends and neighbors.

By the first decade of the twentieth century, the popular perception of [J. Pierpont] Morgan as the leader of an economic conspiracy that threatened the order and ideals of American society began to gain a political voice. Against what they saw as an impenetrable wall of indifference between themselves and the financial and industrial elite, political reformers turned to the American government to speak for their interests. What they found was growing support in Congress, the White House, and the Supreme Court for the idea that the government had the obligation and power to protect American democracy from the evils of big business....

Named after Arséne Pujo (1861-1939), a Louisiana congressman who sat as chairman of the committee, the Pujo Investigation focused on cooperative relationships within the financial community. Its goal was to prove the existence of a monopoly on credit, which Woodrow Wilson had declared in 1911, was "the great monopoly in this country." During the hearings, J. P. Morgan & Co.'s inner workings were brought out into the public sphere in a spectacular and unfavorable light. The man who was chosen for this task was Samuel Untermyer, a New York lawyer whom the Morgan partners learned to hate so much they referred to him as the "beast"....

During and after the investigation, Morgan and his partners were greatly disturbed by the way in which the Pujo Committee's findings were presented to the public. They did not deny that they were members of an exclusive fraternity, but they did not believe that their economic ties constituted proof of a monopoly on money or credit. They were not, however, blind to the writing on the wall.

On March 13, 1913, Jack Morgan [J.P. Morgan Jr.] wrote James Stillman [chairman of National City Bank] that the firm would be reducing its stock holding interests, stating, "The Untermyer enquiry and the press generally have indicated a feeling on the part of the public that J. P. Morgan & Company ought not to have large stock-holding interests in our financial institutions. . . . We all feel that it behooves us to pay more or less attention to public feeling of that kind. . . ." This shift in the firm's attitude signaled the fact that the partners knew times were changing though they could not have known how quickly events would come to pass....

In February 1913, the Sixteenth Amendment had been ratified after having been passed by Congress in 1909, allowing the government to levy an income tax. In December 1913, Woodrow Wilson, by then president, signed the Federal Reserve Act, which led to the creation of a national banking reserve system of twelve privately controlled banks with a central board of governors, which became the depository for commercial banks. Taking stock of the new environment, Jack Morgan announced on January 1, 1914, that he and four other senior partners would step down from dozens of their board memberships, a move that anticipated the government's passage of the Clayton Antitrust Act (1914), which determined interlocking directorates to be illegal if they could be proven to reduce competition.

From the point of view of the Morgans' critics, the new legislation and the banking community's responses were an important victory, the successful culmination to a long, arduous political process. After wringing concessions out of the banking community, one had to ask, however, if the state and Progressive reformers were successful in achieving a more competitive playing field. While there was certainly more regulation, the changes did not make the banking community any less hierarchical, any less consolidated, or any less secret. They also did not make the banking community any more open, any less distant. Though government reforms may have limited their direct influence, they did not fundamentally change the structure, the methods, or many of the relationships within the financial community. What factors and conditions made this possible? Though the Morgan partners had to acknowledge national interests to an extent they never had previously, they found ways to adapt. They were not against making compromises, particularly if they could do so on their own terms.

When Jack Morgan made the decision to drop off the boards of numerous companies, he did not hide the fact that the firm was responding to public sentiment even though he disagreed with the substance of the criticisms. He said, "Although the fact may not be generally understood, we have always undertaken directorships with extreme reluctance, and only in response to an implied obligation that we keep in close touch with these properties whose securities we have recommended and sold to the public." Like Morgan's London partners, Morgan did not believe that the resignations would have an effect on the securities of those companies, if done in a proper manner. He went on to say, "We believe, however, that without being directors we can still keep in sufficiently close touch with the progress of these properties, and yet relieve ourselves of unnecessary responsibilities."

Morgan made the same argument when he wrote privately to James Stillman about the firm's stock-holding interests. When he wrote, "We all feel that it behooves us to pay more or less attention to public feeling of that kind," he went on to say, "particularly as our relations to our friends do not depend on our stock-holding interests." Frank Vanderlip [president of National City Bank] wrote Stillman that Morgan was giving up stock-holdings because he and his partners believed they were of "little advantage" and because "relations were personal and would continue" without them. Later, Morgan told Vanderlip again that he was "absolutely confident that the present relationships are built on personalities rather than on stock ownership, and that they will continue unaltered." These sentiments about the importance of personal ties were explicitly reaffirmed by Benjamin Strong Jr., the president of Bankers Trust. About two weeks after Morgan's announcement in January 1914, Strong wrote George F. Baker Jr. [vice-president] of First National Bank, "Legislation won't bother us if we are surrounded by such good friends as you and I both have down town; and it's the best asset we have." Ten months later, Strong was appointed the governor of the Federal Reserve Bank of New York.

If Morgan and his partners were willing to sacrifice formal economic ties and commitments, such as interlocking directorships or stock holdings, it was because they privately and publicly acknowledged the loss of those ties would not alter the ways they did business. By agreeing to a certain degree of intervention in their formal economic ties then, they safeguarded the most important aspect of their work, the freedom of association and the existence of a separate and private sphere in the world of business. These concessions were possible because their critics also shared their values with regard to the right of private association. The significance of this common ground cannot be overstated. Deriving from a mutual embeddedness in American society, it would also enable the Morgans, as we shall see, to leave private banking and become a public corporation by mid-century.